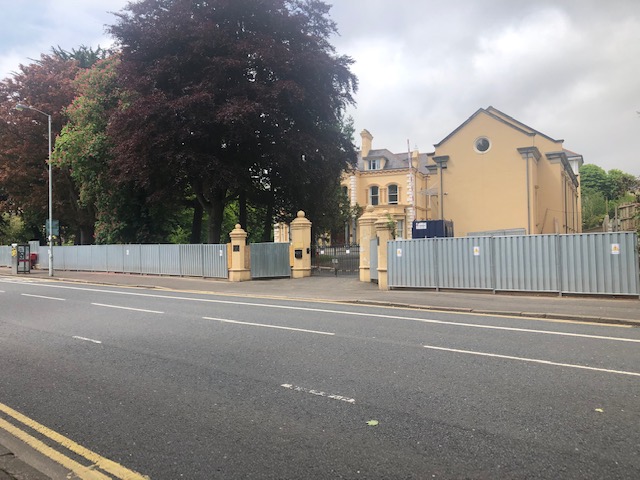 KEEP OUT! The Chinese Consulate at Louis MacNeice House on the Malone Road

A WALL erected at the Chinese Consulate in South Belfast is the subject of a current planning enforcement investigation, Belfast City Council have confirmed.

The metal boundary structure on the Malone Road, which has been described as an “eyesore” by local residents, was first highlighted by the South Belfast News last month.

Local resident Martin McBurney of nearby Adelaide Park has called on the Consulate to address their “security concerns” in a way that is “sympathetic” to the conservation area and the built environment in the area.

The Chinese Consulate described the work on the grounds of the listed house, named after famed poet Louis MacNeice and dating back to 1889, as “crucial” and asked residents to respect the Consulate’s diplomatic privacy and special security.

Belfast City Council said they could not comment any further on the current planning enforcement investigation.

A Belfast City Council spokesperson said: “The works at the Chinese Consulate are the subject of a current planning enforcement investigation which is ongoing.

“At this stage we cannot provide any further information as it could impact on the investigation which is seeking to resolve the issues that have been raised to the Council.”