EYE ON THE PAST – December '81: Raids and arrests in Nationalist areas of Belfast 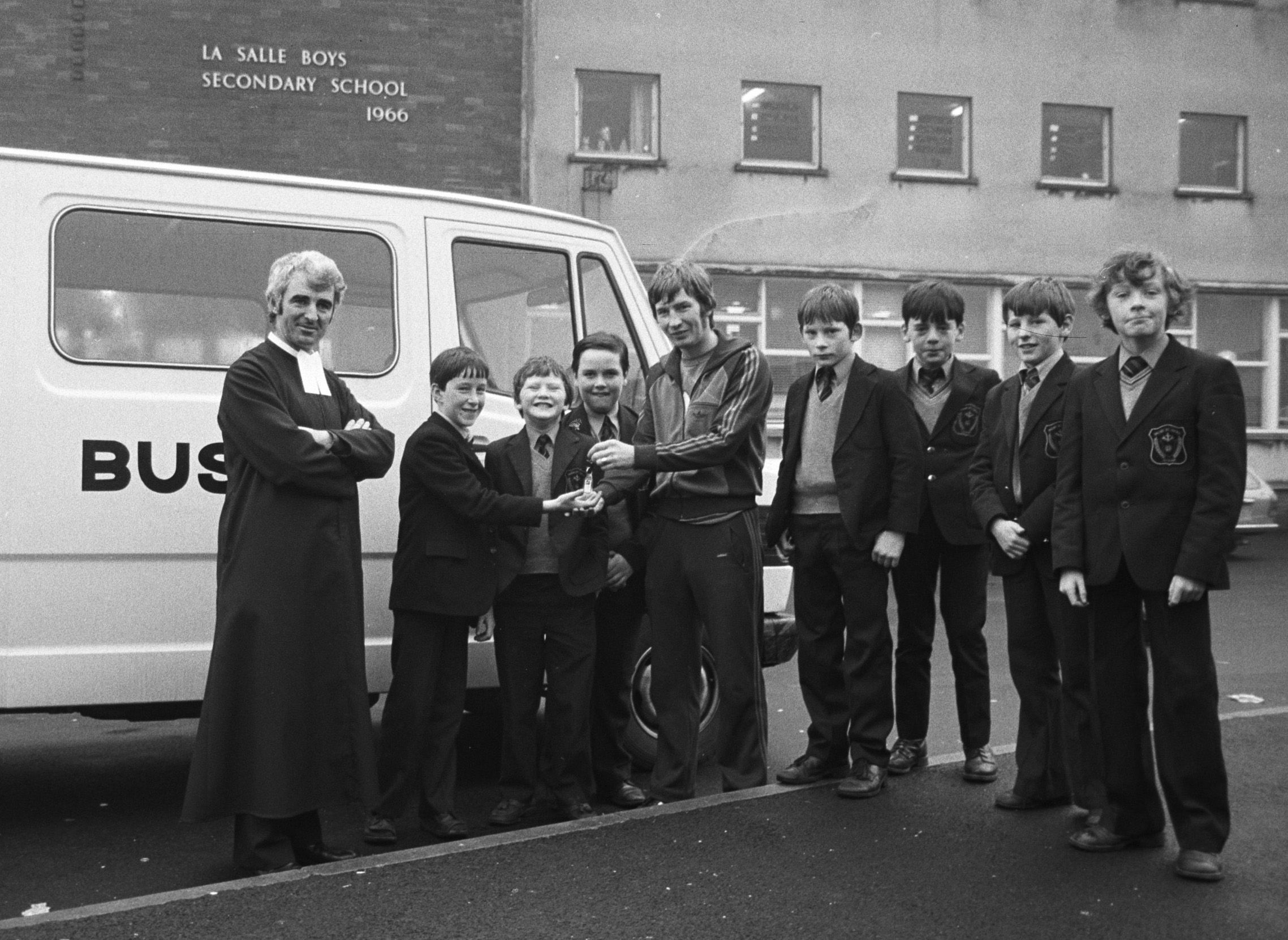 NEW KEYS: Brother Dominic, principal of La Salle, with Sean McGourty, pupils and the new school minibus, which was bought after money was raised following a sponsored walk by staff and pupils to the Mary Peter’s Track back in September

THE people of the Nationalist areas of Belfast are still suffering the effects of the setting up of Paisley’s Third Force.

A marked increase in British army house raids has taken place since the one day strike, and more people in the Nationalist areas believe this to be a deliberate act of appeasement aimed at placating Paisley.

In the two raids covered by our photographer, considerable damage was done to the house, but nothing incriminating was found. These raids, coupled with the arrest of dozens of people in Ardoyne, the arrest of a tenants’ leader in Unity Flats following the killing of a policeman last week, and non-payment of money to Post Offices in Nationalists areas this week because of “security difficulties”, has reinforced the opinion that the Nationalist people are in for a rough time in the coming months.

Secretary of State Jim Prior’s refusal to meet the Silent Too Long organisation earlier this week is just another indication of the contempt with which the Nationalist people have been treated by successive British officials at Stormont Castle.

The Silent Too Long organisation was formed by relatives of people killed in the present troubles by groups professing British loyality, and was formed to combat exactly the type of thinking inherent in Prior’s refusal. As far as the Stormont officials are concerned, the hundreds of innocent Catholics killed by fellow loyalists, are of no consequence. And if ever there were innocent victims in any conflict, surely it must have been the Catholics killed in their hundreds, not because they were IRA men or ex-IRA men or even people with republican connections, but simply because they worshipped at a different altar from their murderers.

The argument that states that they can be equated with the UDR men and ex-UDR men being killed in the most recent IRA campaign, cannot, in any way, be substantiated. To state this is not to make light of the death of any individual, no matter who he is, but rather to clarify and possibly defuse a situation of serious conflict on a religious basis, because Protestant leaders, assisted by the media and some foolish Catholic clerics and politicians, are portraying the killing of UDR men in the same light as the killing of innocent Catholics.

IRA men and members of the British ‘security forces’ are both members of physical force organisations, who volunteer with absolutely no coercion, to advance or defend a political viewpoint by force of arms, and to give members of either group a religious label is entirely wrong, and completely irresponsible in our religiously divided community.

If an IRA man is killed we would not say that he was killed because he was a Catholic. So we cannot see any reason to say that when a UDR man is killed, that he was killed because he was a Protestant. A lot of publicity has been given to the deaths of members of the ‘security forces’ and why not, depending on your point of view. But let us not confuse them with ‘innocent victims’ represented by the Silent Too Long organisation which has been snubbed by Mr Prior.

‘Binge’ does the pub rounds

THE object of the board game is to go out drinking and come home ‘happy’.

Each drink carries a certain number of points and the winner of the game is the first person to get home to bed with a hundred points or more, in other words, happy.

But there is more to the game than simply stopping at a pub and drinking. A player must have a drink in at least eight different bars to win. He must also consider the activities of the other drinkers who may hinder his progress by throwing up, bumping into him, or even drinking bars dry.

A drinker must also decide on what to drink and on whether or not he should take a drink or a ‘nastly’ card while in a bar.

Included in the bars on the couse are: Kelly Cellars, Errigle Inn, Boundary Bar and McGlades.

Binge is being manufactured on a cottage industry basis with the help of Good Vibrations, Great Victoria Street. Despite refusal from one or two downtown shops, Binge is selling in Belfast and can be obtained in the Falls area, priced £1.50 from several outlets.