EYE ON THE PAST – March 1979: People power forces RUC and bailiffs to withdraw from Andersonstown 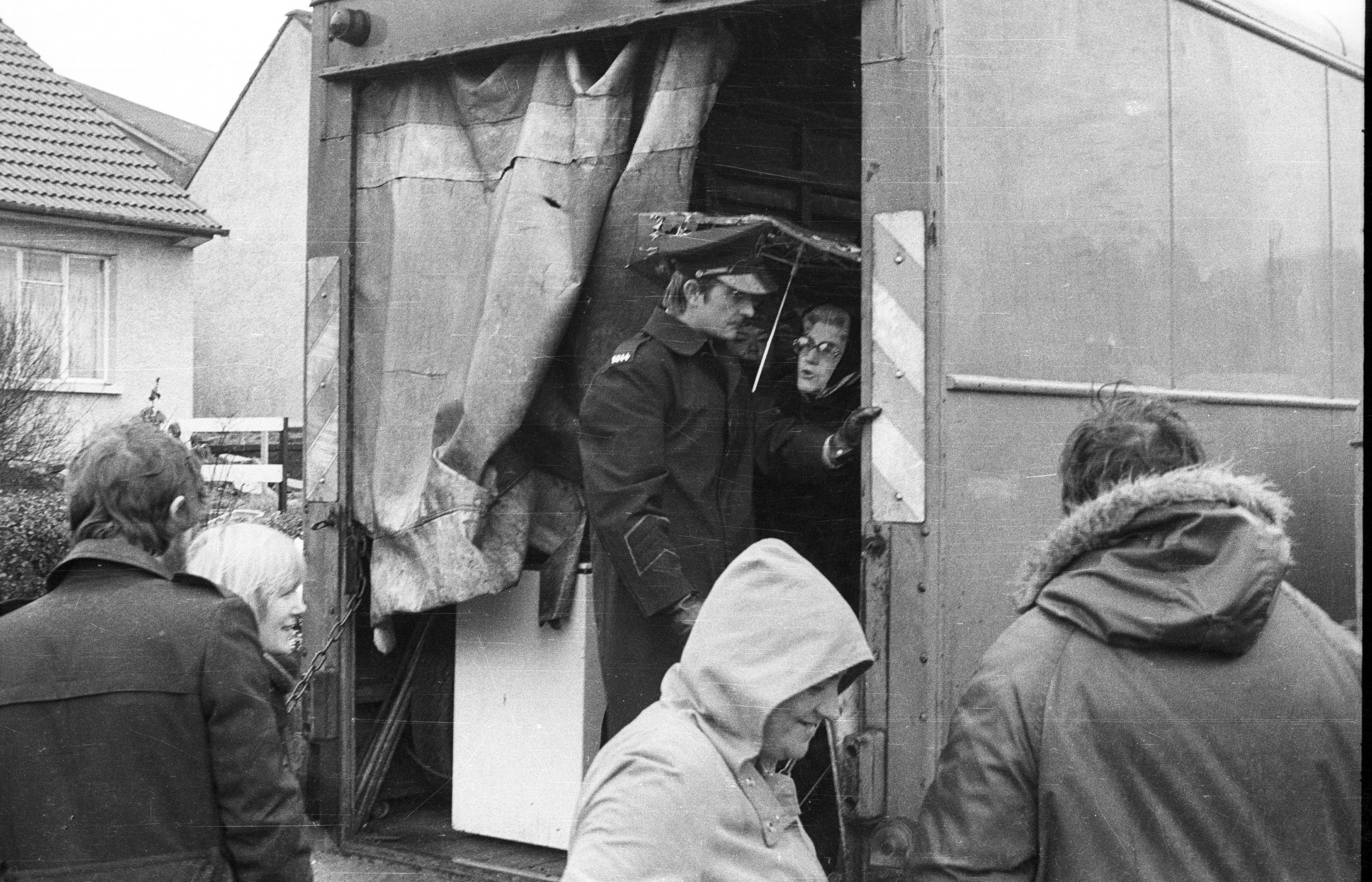 PEOPLE POWER: The RUC are prevented from evicting the Ward family

ON Tuesday the people of Andersonstown evicted the RUC, British Army and seven bailiffs from the area. It was a complete and total victory for the people against the might of the Northern Ireland Office and all done in a peaceful manner.

The drama started at 9.00 in the morning when a large removal van pulled up outside the home of Mr and Mrs Ward in Glenshane Gardens, accompanied by several jeeploads of RUC and British Army.

Seven bailiffs jumped out of the back of the van and immediately smashed in the door of the Ward home and rushed up the stairs of the flat. Their first action was to tear out the stove and remove it from the house. They then proceded to remove every stick of furniture from the flat.

Martin and his eight months pregnant wife pleaded with them to let them feed the baby, but the bailiffs even removed the baby’s bottle into the furniture van.

When our reporter arrived at ten o’clock there were only Sinn Féin members present and the bailiffs thought that there would be no fuss, and the eviction would be complete. They didn’t reckon with the hatred of the people of Andersonstown for the historical implications of eviction. To the people it was a test case, one they had to win.

Slowly neighbours, friends and people from as far away as Turf Lodge arrived to support the Wards. An attempt was made to let down the tyres of the removal van but this was thwarted by the RUC. The van driver was instructed to drive the van away with the belongings of the Ward family inside. Again the women prevented this by blocking the van and banging binlids.

At this stage Mr Ward’s mother arrived, and when Martin came down the stairs to admit her he was kicked out of the door by the bailiffs. He was immediately arrested. Mrs Ward then became very ill and passed out. Her doctor was called for and when he arrived he was quite shocked by her condition.

The flat was then occupied by friends while five of the bailiffs slunk out into the RUC Land Rover. They were prevented from leaving the street because of the arrival of about 60 black taxis which blocked both ends of the street.

The bailiffs became so agitated at this that they told the RUC to let all the furntiture back into the flat. The RUC then told the crowd that if they let the van leave the street the furniture would be returned. This was refused and the people insisted that the furniture be removed first and then the van and the bailiffs could leave.

As the furniture was being removed from the van, one item in particular made everyone cheer. This was the Tricolour which was then hoisted from the flat window.

WITH the publication of their detailed proposals for ‘A Democratically Elected Devolved Government for Northern Ireland’ the Republican Clubs have at long last shaken off their armed revolutionary image of the early 1970s and put on the mantle of a Light Blue Unionist Party.

Gone are the clenched fist salutes and the Ché Guevara badges, to be replaced by charity football matches with British Ministers and calls for gas pipe lines with Britain.

Their call for ‘A Democratically Elected Government for Northern Ireland’, with most of the powers once held by the old Stormont, will hardly get a resounding welcome from the Nationalist ghettoes of Belfast and West of the Bann.

One has to have a unioinst point of view to speak of “Democracy” in the six county context. A Democratic Northern Ireland is in essence a negation of Democracy, since it denies the undeniable Democratic right of the Irish people to self-determination.

Their naive statement that the British withdrawal is not an issue worth bothering about will most surely raise a few laughs, if not a few eyebrows, from Bogside to Barnsley and from Newry to New York.

Following the praise heaped upon them by Harry West and John Taylor, it comes as no surprise to hear that they intend to drop the names Sinn Féin and Republican Clubs and be known from now on as the Workers’ Party. This at least will be consistent.  Can we now expect an end to all the parading and speechmaking at Easter time?

‘WOULD MR JAMES CONNOLLY PLEASE STAND TO ONE SIDE, MR WILLIAM WALKER WILL NOW TAKE THE CHAIR!”

A day at the courts

I FOUND myself in Chichester Street Magistrates Court early this week. No, I had not fallen into the clutches of the Constabulary. I was merely there in an advisory capacity.

What a scene the courtroom presented! Bail applications were being heard, so a quickly moving procession of defendents came and went – each unfortunate being accorded about two minutes of the Court’s valuable time.

The whole spectacle would have provided ample material for the Philospher, the Comedian or the Tragedian.

Apart from the magistrate, who was a unique but badly flawed specimen, the actors in the drama fell into three types.

Firstly the accused, who were all young, male and (by every indication) Catholics. They were accused of a variety of offences like hi-hacking, membership of Na Fianna or possession of weapons.

The next category was the RUC. In all their moves and movements, they displayed to perfection that well fed, ill intentioned oafish lethargy which we have all come to associate with this well beloved body of men.

And then, of course, there were the solicitors. Well dressed, sharp-eyed courtiers. “If it pleases your Worship”, “May I respectfully submit, your Worship” etc, etc ad nauseam. They were the men who were profiting most from the whole conveyor belt of human misery. But they too paid their price, in terms of self-repect. The Jags and Mercedes in the car park across the road didn’t come cheap. They were dearly bought – perhaps too dearly. – Homer