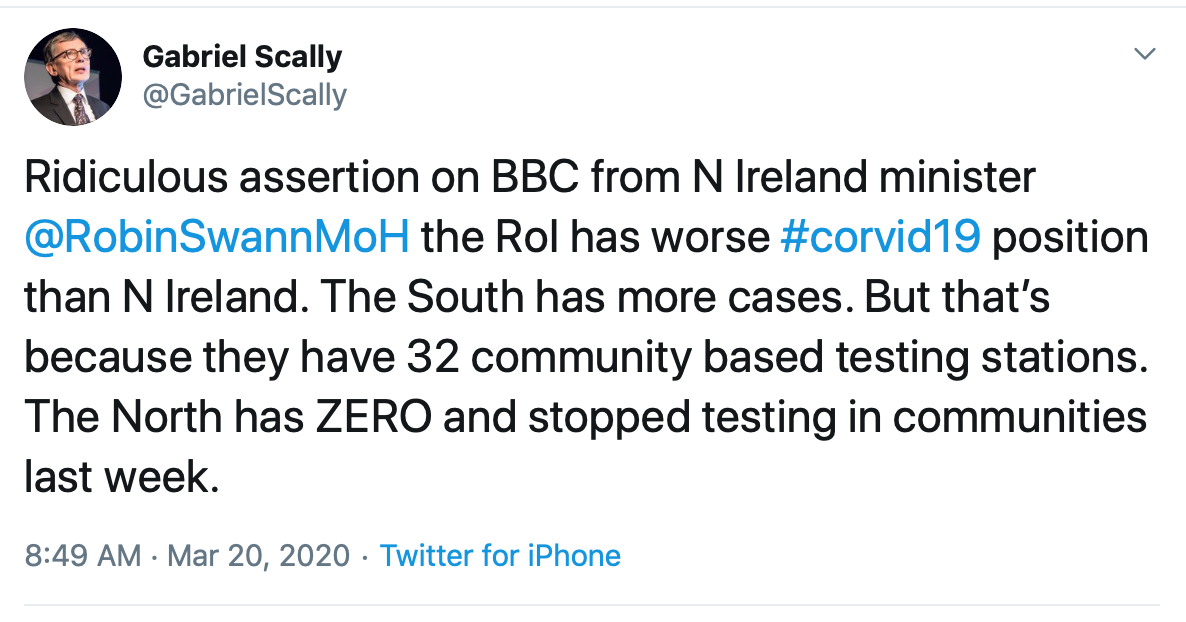 A senior member of the Health Committee at Stormont has branded the current Health Department regime for Coronavirus testing as “irresponsible” and “disastrous”.

Sinn Féin MLA Pat Sheehan (above), a veteran health spokesperson, says testing “needs to be ramped up” much higher than the levels announced yesterday by Health Minister Robin Swann.

“If we don’t know where the virus is, how can we treat it?” asks Pat Sheehan.

“The difficulty is there are people who have the virus but who have no symptoms and they feel safe to mix with other people. It is irresponsible of the Department not to test and if capacity in the health department Is the problem then that needs to be rectified.”

The West Belfast MLA also had harsh words for health chiefs who are clinging to the approach of the British Government which advises self-isolation without testing for anyone who has Covid-19 symptoms.

“Why are the health authorities here not following the advice of the World Health Organisation who insist the only way to tackle the Coronavirus is to ‘test, test, test’?” asks Pat Sheehan.

“They say the numbers contracting the virus here are less than in the 26 Counties but we are also doing a hell of a lot less testing here. Sadly, the Department of Health is basically hanging onto the trouser cuffs of Boris Johnson and that will be disastrous”

He urged health chiefs to follow the lead of the town of Vò which was at the epicentre of the Covid-19 pandemic in northern Italy but which has not recorded any new cases this week. “They locked the town down and tested all 3,000 citizens,” he said. “They isolated those who tested positive and stopped interaction. They continued to test until the town was virus-free – that shows the way forward.”

The Sinn Féin man had high praise for Queen’s grad, Professor Garbriel Scally, the former Regional Director of Public Health in England, who this morning dismissed the claim of Health Minster Robin Swann that the rate of infection in the North was lower than in the South. Dr Scally said in a Tweet: “Ridiculous assertion on BBC from N Ireland Minister Robin Swann the RoI has worse Covid-19 position that N Ireland. The South has more cases. But that’s because they have 32 community-based testing stations. The North has ZERO and stopped testing in communities last week.”