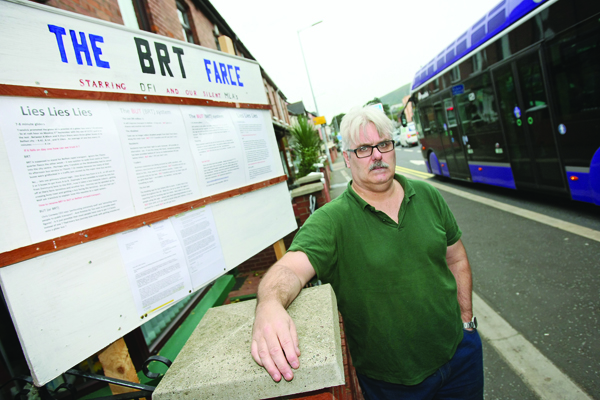 A FALLS ROAD resident who can no longer park outside his own front door due to the new bus lane restrictions has erected a sign in his front garden documenting his “four year battle” against the Belfast Rapid Transit (BRT).

Fintan Heatley has lived at his home on the front of the Falls Road for 25-years and despite being a blue badge holder has been forced into searching for parking in nearby side-streets since the implementation of a 12 hour bus lane outside his home during the summer.

“I bought this house and now I’m not allowed to park at my own door during the day to facilitate this new system,” he explained.

Mr Heatley claims that since the implementation of the bus lanes, to accommodate the new Glider service, many other residents along the route are suffering similar issues.

“One neighbour is bedridden and carers are having difficulty getting parked, which eats into valuable time.

“I’m not objecting to new vehicles like the Glider for the people of the city, I’m objecting to how the system it operates out of was implemented. It was forced onto residents and now it’s pushing out businesses and residents in the area. The Falls Road survived the Troubles but the BRT will see us worse off than even before,” he warned.

Next door is a small store, Motorcrafts, owned by Thomas Daly. He said he is already noticing a decline in business.

Mr Daly explained: “After years of steady business there has been a noticeable drop in footfall in recent weeks. Customers are complaining about parking and lack of access. Sooner or later those behind the BRT will have to eat humble pie but I feel we will have a long time until then and when they do it will be too late – the damage will be done.”

One customer told the Andersonstown News: “I live down the next side-street and I can’t get parked in the street let alone at my front door. We raised questions in the past but they went ahead with the work anyway – no consultation, no reassurances, nothing.”

Supporting the residents’ objections People Before Profit MLA Gerry Carroll said it is clear the BRT system has caused a lot of problems in West Belfast for many people including those with limited mobility.
“Many residents around West Belfast feel that the Department have ignored these concerns, especially when it comes to having parking facilities near their homes.

“Not only does this concern people with disabilities but I have heard stories from care workers who are having to drive around continuously to find a parking space in streets that are heavily congested, this obviously eats into the precious time workers have with patients and means less time is spent supporting those who need assistance.

“The Department should step in, even at this late stage and rectify these issues which are having an impact on people’s lives in our communities.

“People want to see investment in public transport but not in a way that brushes asides their concerns and dismisses them as irrelevant.”
Despite being contacted by the Andersonstown News the Department for Infrastructure did not respond to our queries.