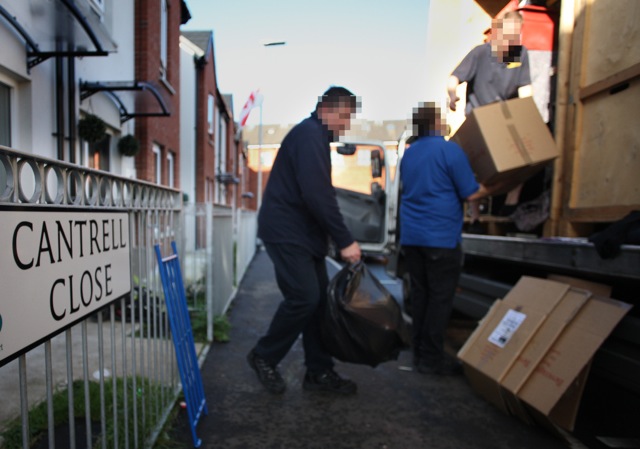 The Catholic family flee their home at the weekend

LOYALIST paramilitaries will not turn the clock back to 1969.

That’s the message from Sinn Féin South Belfast MLA Máirtín Ó Muilleoir after a Catholic family returned to their home on the Ravenhill Road on Saturday to move furniture out after threats from the UVF.

Last week the family, along with three other Catholic families in Cantrell Close, were forced to flee their homes in the dead of night after police arrived at their homes to tell them that they were under threat from loyalists.

Máirtín Ó Muilleoir said: “There were shameful scenes in South Belfast as a Catholic family was driven from their home following threats from loyalist paramilitaries.

“This is the culmination of a PSNI policy, which I have criticised repeatedly, of enabling the nefarious activities of the UVF in East Belfast.

“This policy of go-along-to-get-along is evidenced in the fact that four days after the PSNI passed on these threats to the Catholic families in Cantrell Close, there has been no statement from the Chief Constable and no arrests made. Incredibly the PSNI claims it is unable to identify the source of the threat.”

Mr Ó Muilleoir continued: “The PSNI is alone in being unaware of the fact that the UVF in East Belfast was behind the encircling of the Cantrell and Global development with loyalist and UVF flags before the homes were completed; was behind the erection of UVF and other flags in the area during the summer to intimidate Catholic families and is now behind the threats on four families.

“It’s not lost on the wider community of South Belfast that these same paramilitaries endorsed the DUP before the June election and then mobilised their members to vote for the DUP.

“It’s time to make a fuss about the hate-merchants and thugs who want to turn the clock back to 1969. They must not be allowed to do so."

Mr Ó Muilleoir will lead a Sinn Féin delegation to meet the PSNI about the Cantrell-Global situation and the activities of paramilitaries in south and east Belfast today at Belfast City Hall at 1pm.