Family’s fight for justice 50 years on 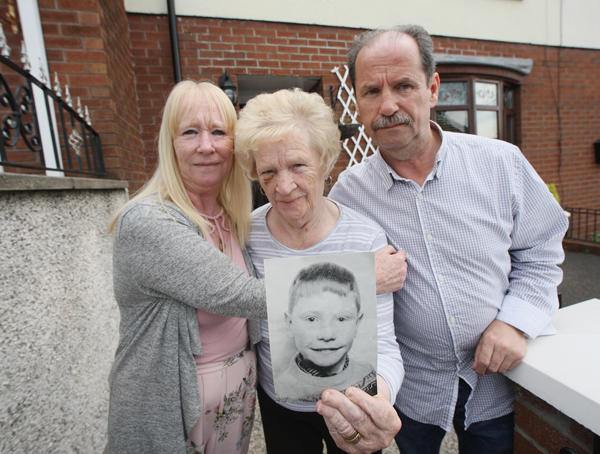 JUSTICE: Patrick Rooney's mother Alice with her son and daughter Con and Sharon, holding a photo of Patrick who was shot dead by the RUC in August 1969

AS the 50th anniversary of the first child killed during the outbreak of the Troubles occurs this month, his family say they will never give up the fight for a full and thorough investigation into the circumstances of his tragic death.

Nine-year-old Patrick Rooney was shot by a tracer bullet fired by the RUC which ripped through a bedroom of his family’s St Brendan’s Path home in Divis Flats during the evening of August 14 1969. The shot was fired from a heavy Browning machine-gun mounted on an RUC Shorland armoured car as loyalists, backed by the RUC, attacked nationalist homes in the lower Falls.

Patrick died in the early hours of August 15. Hugh McCabe was also shot dead by the RUC in the Divis Flats complex on that same terrifying evening.

Ahead of his anniversary, Patrick’s mother, 82-year-old Alice Rooney, told the Andersonstown News that her late husband Corenilus ‘Neilly’ “worked tirelessly for justice and died without ever seeing justice for Patrick”. She recalled the terrible events of that night on August 14 that resulted in the death of her child. A death that sent shockwaves through the West Belfast community.

“There had been calls to keep children inside and my husband was shot himself in the forehead. Neilly came in and said it was getting bad outside, to get the kids into the one room and then bullets and the tracers then came through.

“His (Neilly’s) head was grazed but the blood was running down his head. We thought Patrick had fainted at the sight of the blood but he had been shot himself. Patrick slid down the wall, I was saturated with blood, Neilly tried to get out for help, I was squealing for help,” she said.

“I remember the last words Patrick said to me that night going up to bed was to ‘wake him up for 8am Mass as it was a feast day, the Feast of Our Lady, and that was the last words he said.”

Alice said that before his death, her husband told the Rooney family to keep fighting for Patrick and “that’s what we are doing”.

Following Patrick’s death the Rooney family were awarded £250, plus £60 agreed in special damages at the Recorder’s Court in Belfast.

A folder containing newspaper clippings that the family have collected over the years has been compiled to mark the events of August 1969. Poignantly contained in the folder are pages of comics that the St Mary’s Primary School pupil liked to read.

Patrick’s brother Con and his twin sister Sharon were just eight when Patrick was shot and killed. Con described Patrick as a “kind person” who even at just nine years of age would run errands to the shops for neighbours.

“He wanted to be a priest, which I’ve no doubt he would have been,” he said. “He used to make us all kneel down at night and say our prayers. Patrick was very smart, we fought like brothers do but we were close. Patrick and his best friend Michael served on the altar at St Mary’s chapel. When Patrick was shot he was put on the bed and we all knelt down and prayed.”

Con and Sharon explained that no prosecutions have ever been brought in the 50 years since Patrick’s death.

“Madden and Finucane are dealing with our family’s case,” said Con. “It’s like the case just keeps stalling and stalling until the families are no longer here but they say the truth always comes out in the end.”

Sharon adds: “We have been fighting for justice these past 50 years. Our kids, grandkids know everything about Patrick’s case and if we don’t live to see justice then they will.”

As part of events to commemorate the pogroms of August 1969 a mural will be unveiled to Patrick Rooney and Hugh McCabe at Divis Tower on Wednesday August 14 at 7pm.