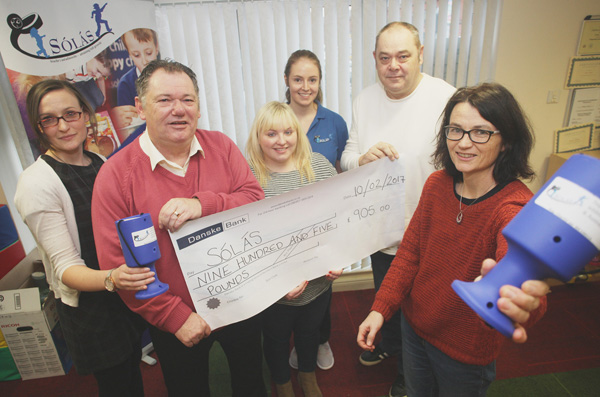 A GRANDFATHER and his friends have raised almost £1000 for South Belfast Charity Sólás as his grandson awaits diagnoses for autism.

Taximen Jackie Stirling and his pal Sandy Ward held a 70s and 80s fancy dress disco in the Westbourne Glentoran Supporters club at the end of January, raising £905.

“I used to be a taxi man, Sandy still is, and we knew people would be counting the pennies after Christmas from that so we held the event at the end of January which proved great as everyone was busting for a night out to spend their money after the Christmas festivities,” said Jackie.

Established in 2009, Sólás is a special needs charity which supports children and young people with a broad range of additional needs including autism and ASD.

“My two-year-old grandson is still awaiting diagnoses but they believe there’s a good chance that he’s autistic. I knew absolutely nothing about it and having been involved in other charity events in the past I decided I wanted to do something for this charity.

“It was actually a girl my wife deals with introduced us to Sólás. Rather than raising funds for a larger charity that may see our efforts as a drop in the ocean we decided we would donate to a smaller charity who value the same cause.”

Sandy said that they had previously raised funds for suicide awareness charities after close friends and family lost their lives to mental illness.

“Last year me and Jackie held a fundraiser for suicide awareness and hopefully next year we will be fundraising for the ICU,” he said. “Every little helps.”

Sólás offer a number of social development, educational support and parent support programmes. As part of their social development programme they facilitate a range of after-schools, weekend and summer scheme initiatives for children and young people with ASD.

Managing director Joan Henderson said she was delighted with the efforts of the pair.

“We are absolutely delighted that Jackie and Sandy thought of us,” she said.

“Lots of children with additional needs and autism don’t receive the support they need from after-school clubs to equipment that could assist their needs. It’s a growing area and were just trying to keep up.

“We really appreciate what these men have done for the charity. The money will go towards helping us provide sensory equipment for children with autism.”