Feile events in support of Palestine 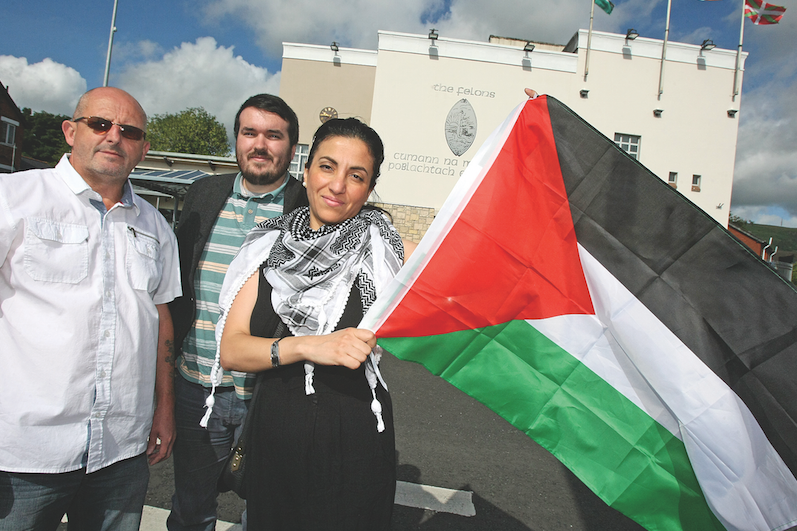 Tommy Rocks, secretary of the Felons, James Quigley of Belfats Action for Palestine and Ireland Palestine Solidarity Campaign along with Riham Abdulkarim, are raising funds for Children at the Felons next week

THE FELONS Club is hosting a Solidarity Session for Palestinian Child Prisoners, raising funds for Palestinian children suffering from imprisonment and internment by Israeli occupation forces.
In a series of events taking place over Féile 30, solidarity groups will be reaching out to the community to show support to the Palestinian community and raise awareness of the conditions hundreds of children have been subjected to, including internment.
James Quigley is a member of two solidarity groups – Belfast action for Palestine and Ireland Palestine Solidarity Campaign (IPSC) – organisers of three events taking place next week. Revealing startling figures he explained: “291 Palestinian children under the age of 16 are in imprisoned by the occupation, trialled without representation and convicted under a military court and that number rises to 394 if you look at under 18s.
“The organisation Unadikom (We Are Calling You) was founded to support all Prisoners detained by the apartheid state. Within this organisation a body called the Ahed Tamimi Center for Child Prisoners was formed to raise awareness and support those children and their families targeted by the Zionist state.”
Riham Abdulkarim worked as a news reporter in the Gaza Strip, witnessing the horrors inhabitants are subjected to first hand.
“I was born in the 48 territories but shortly after we relocated, but then in 1995 my father grew homesick and we moved back and I started my career in 1999 as a journalist until I once again left in 2014,” she explained. “I used to help people through my stories on a daily basis, revealing the suffering of my people, the youth, the children and the seniors in our community with dreams and hopes, but now I am out and I must invest in this by helping them to speak for the children behind bars and residents under seize especially on the Gaza Strip. Two million people are on the Gaza Strip without access to borders or airports. We have been struggling for 70 years. There is collective punishment on inhabitants and there must be a way out of this.”
She thanked the local community for their undying support to the Palestinian people adding: “I was especially flattered seeing the Palestinian flag around Belfast when I first arrived here and I was about to cry, having been to every country and feeling homesick, but then arriving here to see my flag everywhere was overwhelming.
“There is a lot to do and a lot to say about life inside Gaza and I know too well how much they feel abandoned and have been left suffering.
“There is a lot of fake news and different media networks there so it’s our job to speak on their behalf and continue to highlight what is really happening.”
A fundraiser at the Felons Social Club will feature live music from Sean Óg and Gerry McCabe. There will be a raffle and auction to raise funds for the people of Palestine. Tickets are £5 and available at the bar, Belfast Action for Palestine Facebook page or at the venue that night.
Film screenings will take place on Tuesday, August 7 in the Duncairn Centre from 4.30pm until 7.30pm. Films include ‘Killing Gaza’, a film by Independent journalists Max Blumenthal and Dan Cohen documenting Israel’s 2014 assault on Gaza and chronicling its horrific aftermath. ‘Children Under Fire’ was made to raise awareness of Palestinian children who are targeted by IDF, often on a shoot to kill policy
Palestine Day will take place on Thursday, August 9 at St Mary’s College, noon to 2pm. Authentic Palestinian cuisine, including traditional Palestinian hummus and falafel will be available, followed by members of the Palestinian community in Belfast discussing their personal perspectives of the legacy of Nakba (‘Disaster’, the Palestinian term for the expulsion of families to create the state of Israel) and the continued denial of the Right of Return as enshrined in United Nations General Assembly Resolution 194.
Later that night at 7pm a panel of guest speakers will discuss Nakba in the context of the role mainstream media have played in manufacturing consent for Israel’s racist policies of aggression and apartheid against the Palestinian people.