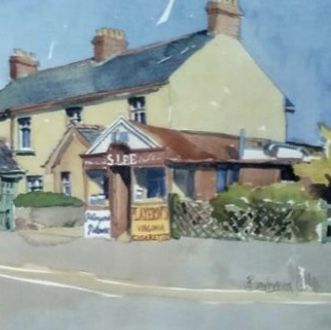 ONE-STOP: Sadie Lee’s tin hut was the best known shop in the Glengormley area, but few knew she was a veteran of the 1916 Rising

“HAS the place changed much since you went there?” I was asked last week after I had admitted to being in these parts for over 50 years. After all this time I’m still a blow-in. I came to live in Carnmoney in 1969, moving to Glengormley in 1973m and I’m rightly regarded as an outsider.

How to answer the question? Yes and no.

On Tuesday, April 1, 1958, Newtownabbey came into being when the first meeting of the new council was held at 9am in the Town Hall, Hazelbank. After a short meeting the councillors travelled to Shore Road, Greenisland, where the Minister of Health and Local Government, John Andrews, unveiled a boundary sign containing the words, ‘Newtownabbey Urban District’. It was a school holiday for the children but the adults went to work as usual and only a few passers-by witnessed the unveiling. Later the Moderator of the Presbyterian Church conducted an interdenominational service in the assembly hall of Whitehouse Primary School and reminded those present that it would be easy to remember the date of the opening, All Fools’ Day.

Professor Robert Wilson continued:  “If people who live at a distance ask where and what is Newtownabbey we shall tell them it is where the mountains of Cave Hill sweep down to the sea at Greencastle, Whitehouse and Whiteabbey, through Glengormley, Carnmoney, Monkstown, Jordanstown and Whiteabbey passing Abbott’s Cross and Rathcoole on the way down.” The Church of Ireland Bishop of Connor and the Head of the Methodist Union of Ireland also took part while High Mass and Benediction were celebrated at St Mary’s Star of the Sea, Whitehouse.

Much was made on All Fools’ Day 1958 of the motto ‘Septum In Uno Resurgent’, translating as ‘Seven Shall Rise as One’, including the seven ancient villages mentioned above, but excluding Rathcoole and Abbott’s Cross as mentioned by Professor Wilson. Rathcoole had to be excluded because, while being the biggest centre of population in the new urban district, it was still under construction, hence the decision to include only the seven ‘ancient’ villages.

However, there is nothing ancient about Glengormley. In 1863 the only building was a gate lodge to the Whitewell Print Works. There was another, still in existence at Collinbridge, but most old timers would say that it was in Whitewell.

Glengormley began to develop on the periphery of the Whitewell Print Works, the remnants of which can be seen in Glengormley Avenue and the little row of houses on Hightown Road. The print works occupied the area from Collinbridge to Farmley on the left side of the Antrim Road travelling from Belfast. A dam used by the Print Works and laundry was filled in to accommodate the construction of the M2. A row of houses where Farmley estate now stands was known as Damtown Lane. The village of Glengormley continued to develop when a tramway service connecting it to Belfast began operating in 1882. By the early 20th century it became a popular resort, with amusements and variety shows in the old Bellevue Gardens and licensing laws which permitted persons who had travelled three miles to have a drink on Sundays. As the new northern government revised the licensing laws, the village became much quieter and began to serve as an overspill for Belfast.

By the 1960s Glengormley was known as the highest point on the route from Belfast to Portrush and before the M2 was opened all traffic passed through it. It was then a place to go through rather than to go to. With the completion of the motorway things became quiet again and as strangers such as myself began to live there we were taken in by the quaint village centre. The Glen Inn, formerly Molly Anne's, famous during the 1920s for big crowds on Sundays, had a new lease of life and a new name. The cabaret scene in Belfast was booming with the Trocadero, Talk of the Town, Tito’s, Abercorn etc putting on successful shows with cross-channel artistes. Peter Byrne’s Glen Inn was part of the circuit and had big crowds nightly. By day the village was sleepy. On the lower Carnmoney Road you had a newspaper shop,  McMillan’s, next door a sweetie shop, Sutton’s, and Brennan's,  a barbers shop – and the Glen Inn. Up the entry was the bookies. Bellevue Taxis took over from a barber who was reputed to place a bowl on your head as he commenced work in the building, then part of Glen Inn. On the opposite side was the Glen Fish Restaurant, better known as Greasy Joe’s, where Billy Twyford made the best pasties, also a barber/artist named Denis Irwin who loved using Brylcreem.

Probably the best known shop in the village was Sadie Lee’s, a tin hut on the corner of Carnmoney Road and Church Road. In an earlier era she had tea rooms in the garden adjoining the Bellevue Gardens and  she made ice cream. She used to ride her motorbike with sidecar down to her other shop at Whitewell near the Bellevue Arms where her ice cream was popular with zoo visitors. Local people would have told you stories about Sadie serving Al Jolson and Burl Ives, who came here to entertain American soldiers during the Second World War. Few of them were aware that she was on active service in Dublin during Easter 1916 and wasn't caught. Sadie’s landlord was Artie Mulvenna, who ran a hackney cab business close by and housed his horses in the building opposite the Glen Inn. His son Jack, who was married to a Clones woman related to Matt Fitzpatrick, who was killed in a gun battle in Clones in 1922, told me the story. Gregg’s supermarket, the  petrol station on the Antrim/Ballyclare Road junction, Paddy Grew’s Red Hand Inn on Ballyclare Road opposite Ted Gallagher’s shop, Blacksmith Frank Smith and Mawhinney’s Greengrocers  beside the trolley bus terminal were all well known. The Gift Shop where identical twin sisters Kim and Nicola Friel worked was also busy. They appeared as singers in cabaret at the time. The Village Inn on the Antrim Road was a new venture and opposite was Walker & Ramsey, who sold toys and model kits.

Fred's shop, on Glebe Road, was open till midnight. Fred stocked everything.  Opposite the Glen Inn was the Old Farmley Shopping Centre with Cat Ballou and Gawley’s Shoes.
Rose Hall doctor’s surgery on the corner of Hightown Road and the Scout Hall on Church Road, nothing more than a glorified Nissen hut, were well known features of the village.
A programme of house building in the 1960s brought a big increase in the population with all five roads from Belfast, Mallusk, Antrim, Ballyclare and Antrim being adorned with row upon row of of semi-detached villas.One wag declared it should be named Glensemi. By 1980 every  commercial site in the centre was filled and the place was thriving, being the busiest centre in County Antrim. If it wasn’t for the sign at Bellevue a stranger would have no way of knowing where Belfast ends and Glengormley begins.

Private houses on the Antrim and Ballyclare Road were then being bought over and converted into commercial premises. It eemed that Glengormley centre was set to grow and grow.

This was to change abruptly.
To be continued.