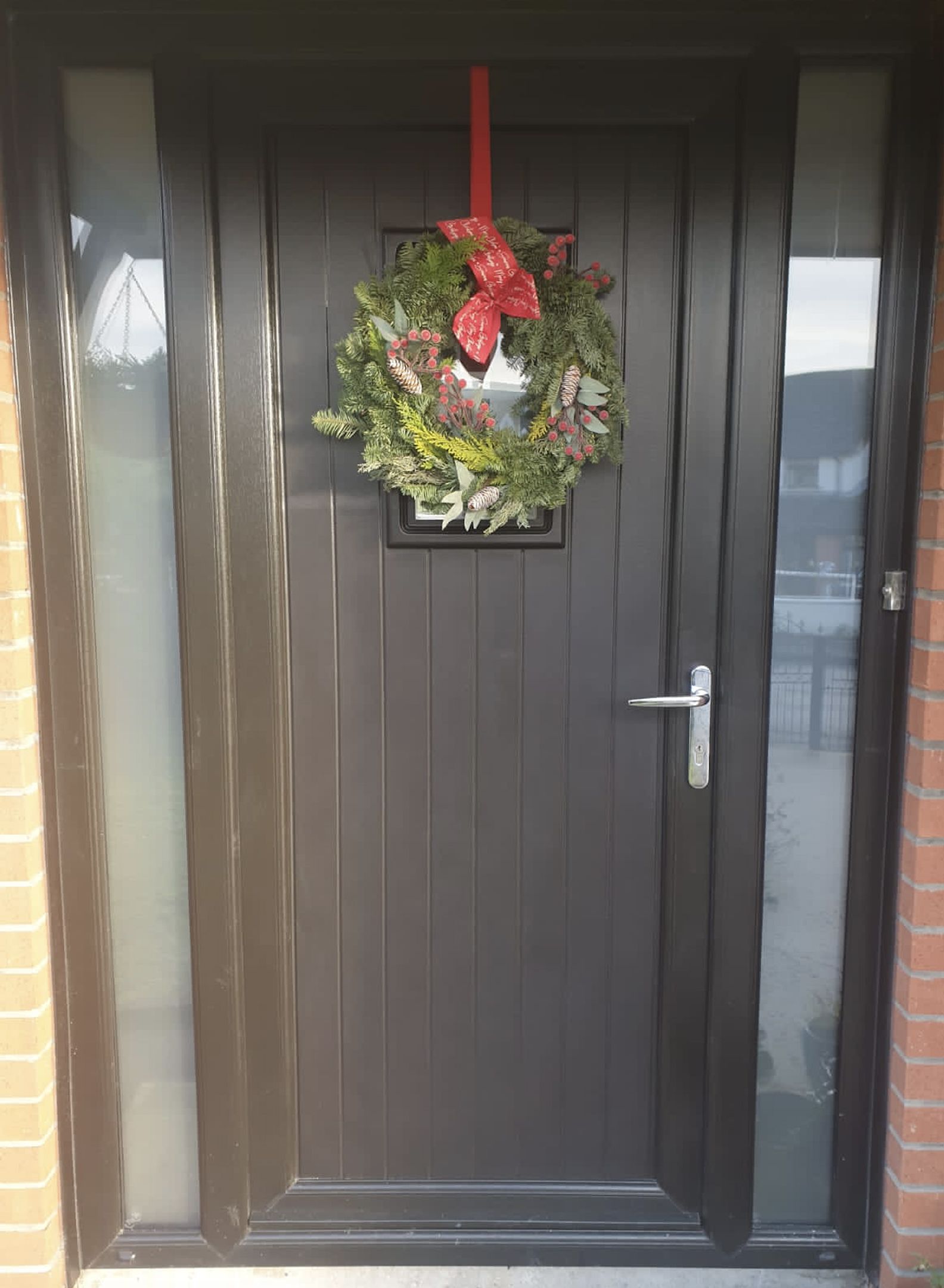 A FESTIVE FRONT: Hanging a wreath isn’t as straight-forward as you’d think

REGULAR readers of this column will know that Squinter’s memories not great. It’s not a new thing – he’s the only person in his family that his mother didn’t trust sending to the shop. Send Squinter for three things, he’d come back with two; send him for four and he’d come back with three (if his ma was lucky); write him a note and he’d leave it behind.

The memory of the day that Squinter told three American visitors to the office to cancel their taxi and he’d run them to the Europa still produces a wince. Out Squinter walked into the car park, the Yanks following like ducklings. Squinter’s car wasn’t in the usual spot so he walked about a bit, the visitors following obediently and silently. Around the building he went to the front car park and scanned the vehicles and spaces there with no joy. After two or three minute it suddenly came to him that he’d given his missus the car at lunchtime.

Instead of explaining this off with a laugh and offering to call another taxi, Squinter’s embarrassment addled his thought processes to the extent that he simply told them that he didn’t have a car. That was about a month after Squinter got out of the car in the morning with some papers and a laptop and forgot to take the keys out of the ignition. It was 5.15pm when he noticed exhaust fumes as he approached the vehicle. He’d left it running for just the eight hours.

Dunelm Mill on Boucher Road and Squinter’s a man on a Saturday afternoon mission. He’d bought a nice wreath for the front door the previous day, but when he got it home he realised he hadn’t given any thought to how it was to be hanged. The front door is one of the modern composite jobs that you’re not allowed to drill hooks into, but nil desperandum, a quick chat with Professor Google saved the day.

What you do is you buy a nice bright, festive ribbon: red or green’s the most popular, but you can also go mad and opt for silver or gold. What you do then is you loop the ribbon through the wreath, draw the two ends over the top of the door and tie them to an adhesive hook you placed upside-down on the back of the door; conceal the hook by tying the ends of the ribbon in a nice big bow and – hey, presto! – you’re good to go for Christmas.

Inside the shop, Squinter did what he always does: wandered around aimlessly for a few minutes and then went in search of an assistant. Very nice young woman she was, too. Off she set at a brisk pace towards the back of the store and in  seconds there the two of us stood under the Haberdashery sign. “What colour would you like,” she asked, and Squinter was forced to admit he wasn’t sure and so he told her what it was for. Then she asked what colour the wreath was, to which Squinter confidently answered “Green with red berries and a red bow.” She confirmed Prof Google’s analysis that green and red were the most popular colours and then she asked another perfectly logical question in relation to colour schemes: “What colour is your door?”

Squinter opened his mouth to answer but nothing came out. Still relatively undaunted, he tried mentally walking up to his front door, negotiating the gate and the path, the steps and then… blank. He could see a door in his mind with a square window and two side panels, but for some reason the door kept changing colour: white, brown, black, green, blue…

So Squinter muttered an apology and rang home. He tried to mumble the question, but she heard it and when Squinter hung up and told her the door was black, she merely smiled and said that a nice Christmassy red would stand out well against a dark background.

And that was that. Squinter thanked her profusely and off she went, still smiling. Squinter wandered off in search of the tills, asking himself whether it is in any way normal for a person not to know what colour their front door is and he felt himself reluctantly drawn to the conclusion that, no, it probably isn’t. But when he remembered that he’s been forgetting things for as long as he’s been old enough to remember things, he cheered up a little.

Around the corner he continued, finding himself in the soft furnishings section and there was the very helpful young woman who’d helped him with the ribbon. She smiled and Squinter smiled too, and then he said the only thing that seemed fitting and apt in the circumstances: “Excuse me, you couldn’t tell iz where the check-out is?”


SQUINTER’S not gonna lie: watching the comical fleg protest eighth anniversary march from Sandy Row to City Hall on Saturday, he was unable to raise a laugh.

Oh, sure, the fleggers have been comedy gold since the night in December 2012 when yer woman yelled “No surrender!” through that City Hall porthole: from wee Jamie getting done for taking part in illegal public processions that he said he didn’t know were illegal to his ditching of the protestors four years later; from Willie Frazer’s Abu Hamza impression to the PSNI being told to do their job by the Supreme Court and stop illegal things happening.
All these things have helped us through some difficult times, and if laughter really is the best medicine the four-year Twaddell caravan vigil was the equivalent of the Covid vaccine. But the sight of a snowman leading eight old folks (two of them lost shoppers, apparently) was so achingly sad that Squinter was only able to watch it 38 times.

Fleg Protest HQ, planning meeting.
– Right, tell me again, who’s going to lead the parade?
– Olaf.
– Olaf? Who the buck’s Olaf?
– The snowman out of Frozen.
– Is that the Disney cartoon?
– Oh, yes.
– Is it wise to have a cartoon character leading a parade protesting the grave injustices being done to the PUL community by republican agitators and a compliant police and justice system?
– No.
– Fair enough.
– What was the big hit song from the film?
– Let It Go?
– That’s the one. Could be a tad embarrassing once the republican social media trolls get going.
– In what way?
– Never mind.
– Remind me, why are we having a parade to mark the eighth anniversary in the middle of a Covid pandemic?
– Because it’s the one between the seventh and the ninth. It’s just two years before the tenth and three years after the fifth.
– Good point.
– How many people are going to marching.
– We’ve told the Parades Commission fifteen.
– Thousand?
– Don’t be stupid.
– Hundred?
– No, fifteen. Fifteen people. We’re being responsible when it comes to crowds and social distancing.
– Good man, that’s clever thinking.
– Unfortunately we’ve had a few cancellations.
– Go on.
– Well, Geordie’s having a problem with his ankle tag.
– What kind of problem?
– It’s back in Maghaberry with him on it.
– Who else?
– Mervyn and a few of the lads called in sick.
– Sick?
– Yeah, remember that anti-lockdown/Covid-is-a-hoax demo they went on two weeks ago?
– Of course, I was at it myself.
– They all got Covid from it.
– So they’re self-isolating, right?
– You could say that. If you call an intensive care unit isolating.
– So how many people are attending now?
– Seven.
– How many bands?
– None.
– Stick-twirlers?
– None.
– Stalls?
– None.
– For the First Time in Forever?
– Wha’?
– It’s another song from Frozen.
– LOLs.
– No, none of those there either.


IN the new PlayStation Spider-Man game, Miles Morales, there’s a flag on the United Nations building in New York that comprises a harp on a green background (right). It’s most likely meant to be the flag of Ireland, because that flag (but with a gold harp) was the unofficial flag of the country in the 18th and 19th century. It was originally the flag of Confederate Ireland – a seven-year spell when Ireland was effectively self-governed during the Eleven Years War of 1641-1653.

Why it has popped up on a hot new game is not entirely clear, but whatever the reason, Sir Jeffrey of Donaldson, DUP MP for Lagan Valley, is not a happy man. He told the Belfast Telegraph: “The notion that the display of this flag depicts an all-Ireland demonstrates the ignorance of both the game makers and those who don't know their history.”

So, just to be clear: Sir Jeff thinks a bunch of nerds who made a computer game about a man who was bitten by a radioactive spider, who shoots web from his wrists and can stick to buildings and leap great distances need to be a little more realistic. Makes sense, you have to suppose. To some people.

Meanwhile, the Tele, who describe the flag as a “blunder” in their story, are not averse to a ricky or two themselves when it comes to the lycra-clad superhero. First up, they call him Spiderman in their headline, when his name’s actually Spider-Man. Also, the system for which the game was designed is PlayStation and not Playstation. And the titular hero of the game is, as we’ve seen, Miles Morales, even though the Old Lady of Royal Avenue (or is it the Docks now?) thinks it’s Miles Morale.

Those may appear to be trifling errors (although there are three of them) but game nerds take this kind of thing very seriously indeed.

Sir Jeffrey ended his contribution on the burning issue of the day on a defiant note: “Northern Ireland's future within the UK won't be determined by what's in a Playstation (sic) game – it will be determined by the votes of the people of Northern Ireland.” Which is actually a very important point to make because who among us hasn’t woken up in the middle of the night sweating about how PlayStation games might damage our Precious Union? Who hasn’t fretted about how Spider-Man might unilaterally end the ceasefire? Or how Captain America, the Hulk and Wolverine might form a Sinn Féin cumann on the Planet Krypton?