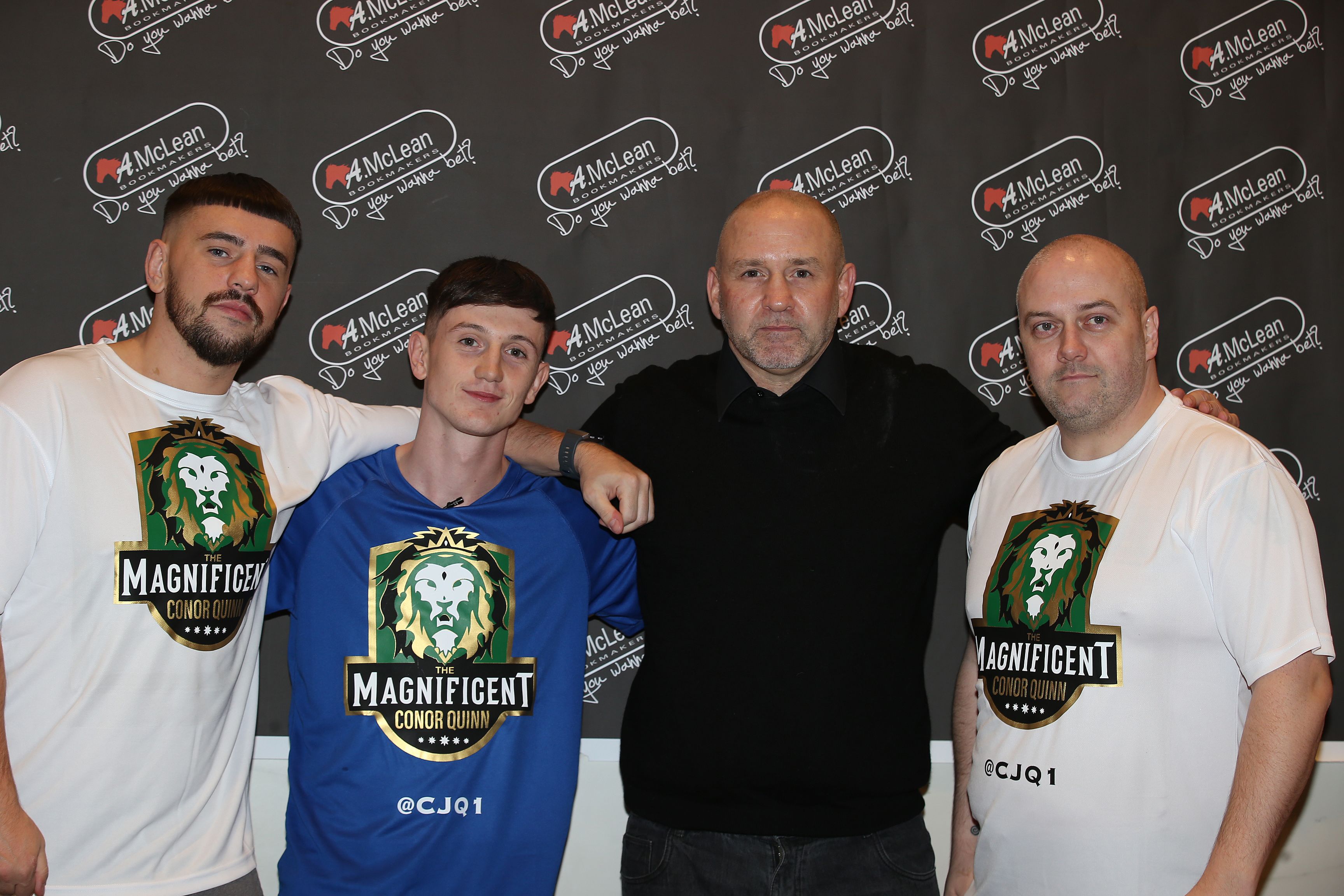 'The Magnificent' Quinn was a rising amateur star having won numerous national titles before going onto box in the green vest at World and European level as a youth, has already built a 2-0 record as a professional with those stoppage victories coming far away from home in Brisbane, Australia and Bangkok, Thailand.

Due to the Covid-19 pandemic, Quinn - who was based in Brisbane - opted to return and joins Dunlop's impressive roster of fighters that includes James Tennyson, Tommy McCarthy, Paul Hyland Jnr and Eric Donovan.

"I am delighted to be back in Belfast and working with the best in the business," said the 22-year-old flyweight at the Park Hotel on Wednesday.

"All I want from my manager is for him to get me opportunities, and then it is up to me to work hard and get the results.And it is clear that Mark can get those opportunities, so all I have to do is work hard in the gym and make sure I am ready for whatever fight he gets me. I will work as hard as I can, and I know Mark will get me the fights I need."

Quinn made the switch to the pro ranks last year after a promising amateur career and it was something of a surprise when he opted to travel Down Under to embark on the journey.

However, the lure of becoming a star in his home city and joining a thriving scene was too good to turn down as he looks to make his Belfast bow at the Stormont Hotel on March 13 to begin what he hopes will be a busy 2021 under the tutelage of trainer Dee Walsh.

"I was in Brisbane for a year, and even though I only had two fights, I was in the gym every day," he reported.

"I feel I developed as a professional. I know I did well as an amateur, but this is the pro game now and that year in Australia helped me experience-wise.

"In 2021, I just want to be fighting as much as I can and listen to what Mark says. I have full trust in him, so whatever he wants me to do, I will do, and hopefully, before the end of 2021, I will have had a successful year and got a few more wins under my belt.

"I had some success as an amateur, and I now know what success tastes like, so I want more of that in the professional game."

Manager, Dunlop already has world ranked lightweight James Tennyson and European cruiserweight champion Tommy McCarthy on his roster and says he has every faith that Quinn can progress onto world level in time, but will concentrate on aiding his progression for now.

"He was a top-level amateur who fought at world level and is a huge talent," said Dunlop.

"He is a top-class kid, and he is going to do the business. In his weight division - flyweight or super flyweight - this kid could win a British title now, but we are going to take it easy and bring him on at the right pace, but the goal is to be a world champion.

"No one can question the effort I put into my team. I have a small and select team. I am just happy sitting in the background watching these kids come home with their belts, before buying cars and houses.

"Peter Graham, his amateur coach, contacted me first, and then I asked Dee about him because Dee had been working with him for a bit. Then I got talking to Conor, and he wants Peter and Dee to look after him. I am looking forward to the journey, but this is the beginning for Conor, Dee, Peter and myself."

Walsh hung up the gloves five years ago having built a 12-0 record, but the lure of the fight game was never far away and his expertise in the sport saw him transition to trainer.

Known as a slick, skilful operator inside the ropes, the former Irish champion is keen to implement that 'hit and not get hit' style on his fighters and with Quinn known as an excellent boxer, the link-up has all the potential to be a winning combination.

"Conor has more dedication and talent than I ever had," said the 30-year-old St James' man.

"I know for a fact that Conor will reach the very top. I don't only think he will be a European and World champion. I believe he could be a multiple world champion.

"That may be a big statement, but I have known Conor since he was a young kid. I remember sparring with him when he was a young lad and remembered thinking then that he was special.