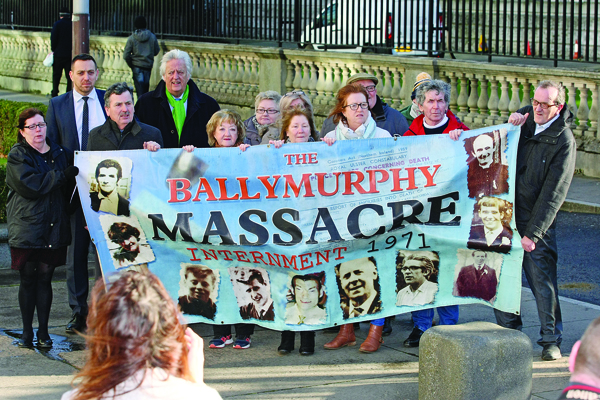 A former paratrooper has described as “psychopaths” some soldiers based alongside him in West Belfast during the Ballymurphy Massacre.
Soldier M597, who was a member of A Company, broke down in tears on Monday as he said that “rogue soldiers” were “out of control” and “shot innocent people”.
He said he was in the Henry Taggart army base shortly after an incident in which four people were fatally shot.
He wept briefly as he described seeing three or four bodies in the hall and recalled what the soldiers there told him had happened. He said the soldiers were on a high, excited and had clearly enjoyed what they had done. He said they told him that B Company officers had lost control and told soldiers that the army would give them cover for whatever they had done. M597 said they felt they could “shoot anything that gets in the way.” “It was a joke to them,” he added.
Last week, the inquest heard a claim that soldiers held a sweepstake on who would kill a gunman first. As he was about to leave the court M597 told the Ballymurphy families that the claims were false. “I am truly sorry for any part I played in this and I would like you to leave here not believing what (Henry) Gow told you last week, because it’s not true. I’d hate for you guys to go through the rest of your life thinking that – it’s just not true.”
The court also heard from a former Royal Military policeman who told the court he had been at the Henry Taggart base a day after the deaths and had heard stories from the soldiers there about what had happened. Soldier M928 said that soldiers told him about the shooting of Father Hugh Mullan and heard the rumour that he had been moving a weapon or weapons at the time. The soldier was asked why he had told investigators three years ago that he had witnessed that incident. M928 said he had mixed two separate incidents up in his head and when he realised his mistake he had corrected it at the time. He also denied witnessing the abuse of prisoners at Girdwood Barracks in North Belfast where he often delivered prisoners arrested by the army. The inquest continues.