Fr Gary is ‘humbled and challenged’ by CRC award 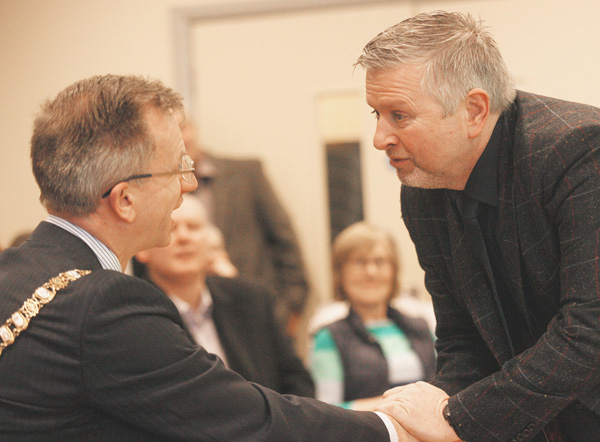 Fr Gary Donegan returned to Holy Cross to accept an award from the Community Relations Council for his dedication to peace building in North Belfast.

The popular priest who hails from Fermanagh was moved to Crossgar last year as part of a reshuffle within the Passionist Order. He spent 16 years at Holy Cross, eventually being appointed rector.

Addressing an audience made up of representatives of the community sector and all major political parties, Fr Gary said that he saw the award as recognition of the work of many people who fought to build peace on the interface.

“Receiving this award today in the Houben Centre is a very humbling and yet a challenging experience for me,” he said. “This centre was the brainchild of many good people who wanted to create a place that was straddling the most contentious interface in this city, the scene of the largest loss of life of any area during what we euphemistically refer to as The Troubles.

“The Passionists, including my predecessor Aidan Troy, the Holy Cross Ardoyne Trust and those generous benefactors particularly the Flax Trust and Fr Myles Kavanagh all envisaged a vision and we all were singing off the same hymn sheet exactly the same as those associated with the Community Relations Council.”

The establishment of small cross community initiatives formed the basis for dealing with bigger problems.

“These kind of initiatives were following by simple gestures, for example Christmas carol services. Anywhere else probably in the country a carol service would involve me at the time ringing up the local minister and saying, 'come on, we're going to have a carol service'. Here it meant speaking to paramilitaries, ex-paramilitaries, the PSNI, community groups. The only one not actually involved in it was my mother! At one stage we were going to put up a Christmas tree and we were threatened we would be shot. I like a Christmas tree, but not that much so we went for the carol service.

“People said it wouldn't happen but it did happen and I thank the retired Reverend from Woodvale Presbyterian Church Ken Doherty. I thank Bill Shaw in the 174 for his work also. When you look around this room and see the two Johns and Trevor. Me and Trevor (Rev Trevor Williams) had this amazing experience once. When Dunnes Stores opened their big shop down here in an effort to bring the community together it was bizarre. We were actually walking up and down the aisles the night before it opened blessing the aisles in case rows would break out and pineapples and coconuts would be fired at people.”

“The work with the Dockers and SHIP where we have the annual prayer service probably breaks every rule in ecumenism.”

At the end, said Fr Gary, it all came down to love.

“If a Passionist cannot baptise, if he cannot marry or bury, if he can't do that with a smile on his face or love in his heart then he's not worthy of the sign that's on his habit. But it's reaching out beyond that, it's doing with with a heart and a half, with the love of God’s people. That's the mandate of every single one of us.

“We cannot hide behind the safety of institutions or the security of a desk or the comfort of a clerical guard. The truth is I do own one clerical collar – it's Protestant but I do have one.

“I'm known as the priest in the jeans and that's because I'm out in the street – the reason is that that's where we belong if we're going to change society.

Community Relations Chairman Peter Osborne paid tribute to the priest for his work over the years.

“Gary Donegan has had a profound impact in the Ardoyne area and beyond,” he said. “He is a man of deep integrity who has worked tirelessly in building peace, community relations and better understanding in Ardoyne. I’ve had the privilege of working with Gary and have witnessed his unwavering commitment to peace and reconciliation. Gary has never been reluctant to get his hands dirty and has been central in building important and enduring cross community relationships in one of the most testing environments.

“His presence over the last few years has been critical in moving forward some of the most difficult issues including the parades disputes finally resolved this year.”