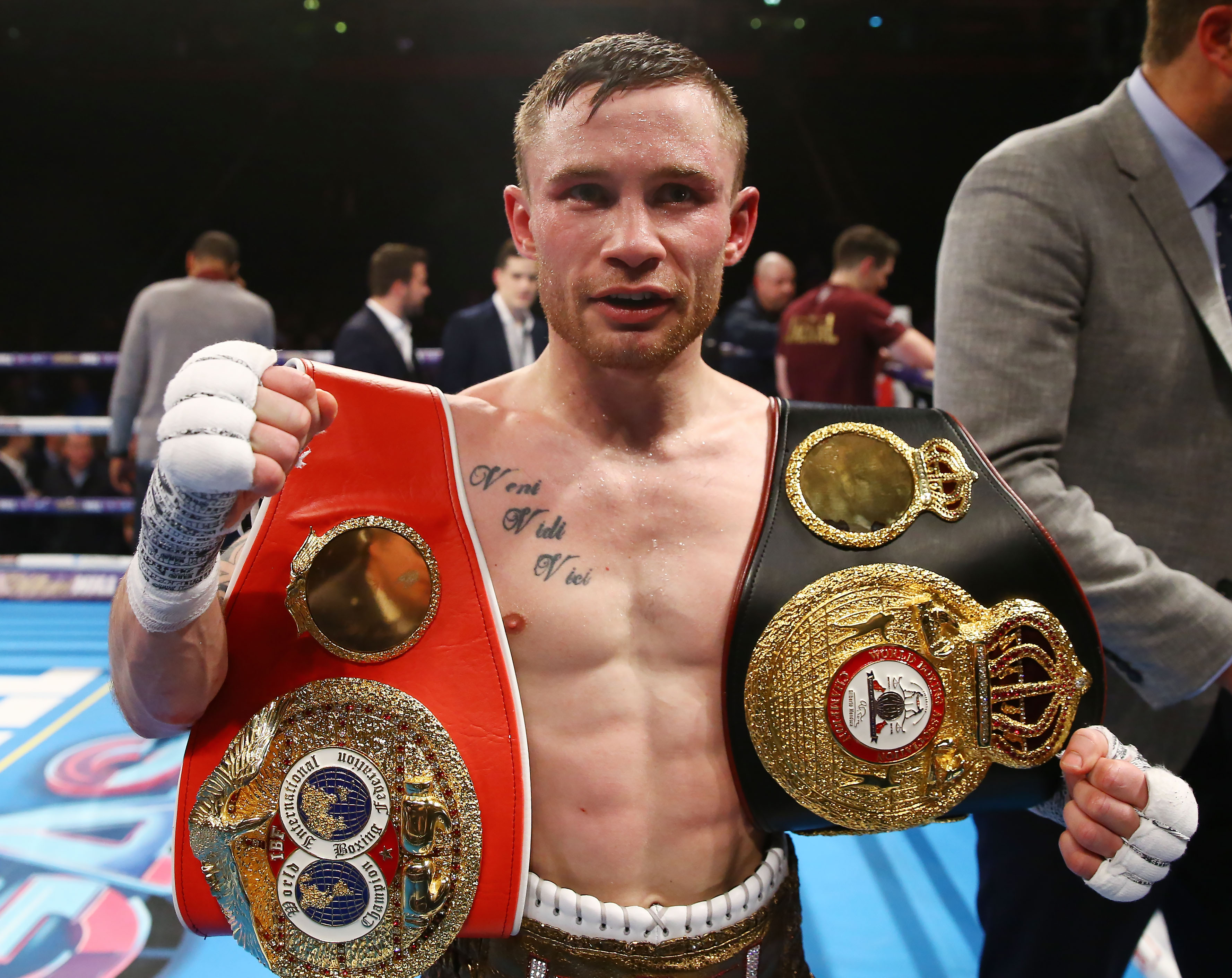 Carl Frampton looks set to relinquish his IBF and WBA super-bantamweight titles in order to move up to featherweight and challenge Leo Santa Cruz according to US broadcaster, Showtime Press Eye - Belfast -

CARL Frampton looks set to step up to featherweight and challenge Leo Santa Cruz for the WBA featherweight title in late summer according to US broadcaster, Showtime who included the match-up on their spring/summer schedule on Friday.

This would mean 'The Jackal' - the first Irish boxer to unify titles - would relinquish his IBF and WBA super-bantamweight belts given he is mandated to fight either Shingo Wake (IBF) or Guillermo Rigondeaux (WBA) in his next outing - indicating he could only keep one of the two belts.
Frampton was in line to face the Mexican for the WBC super-bantamweight title in 2014 after winning a final eliminator for the 'Green Belt' with a second round stoppage win over Hugo Cazares in April of that year, but instead went on to meet and beat Kiko Martinez for the IBF strap at the Titanic Slipways in September 2014.
Santa Cruz - a former champion at bantamweight and super-bantamweight - stepped up to the 126lbs division in May of last year on the undercard of Floyd Mayweather v Manny Pacquiao at the MGM Grand, Las Vegas when he out-pointed Jose Cayetano over 10 rounds before defeating Abner Mares last August in a classic for the featherweight title.
Just hours after Frampton added Scott Quigg's WBA super-bantamweight belt to his own IBF title two weeks ago in Manchester, Santa Cruz defeated none other than Martinez in five rounds in Los Angeles before confirming in his post-fight interview he wanted a Frampton showdown next.
In the post-fight press conference in Manchester, Frampton - who along with Santa Cruz is signed with influential American advisor Al Haymon - said the wheels were already in motion for a super fight with the undefeated 27 year-old.
"I spoke to Luis Decubas - one of Al Haymon's main people - straight after the (Quigg) fight and he said that we should now make the Santa Cruz fight," said the North Belfast man.
"That's very appealing to me."
Those sentiments were echoed by his manager, Barry McGuigan.

"Santa Cruz is an obvious fight and we would love to go to America again, the East Coast," said McGuigan.
"To be honest, the Quigg rematch is not that attractive to us, we would prefer the Santa Cruz fight.
"The difference between Santa Cruz and Scott is that Scott was apprehensive to throw as he was being hit hard and didn't want to let go. Santa Cruz will let go. I think that would be a fabulous fight."
It seems that fight is now likely to happen given it has appeared on Showtime Sports' spring/summer schedule that states on its itinerary for the year ahead: "Frampton the unified 122-pound titlist, will move up to face Santa Cruz for the WBA (super) Featherweight World Championship."
It is likely a meeting would take place in the United States, given Santa Cruz told Belfast Media Group in an exclusive interview just before his appearance on the Mayweather v Pacquiao undercard last year that he would anticipate home advantage.

“He (Frampton) is a great fighter who gives everything," said the affable Huetamo native.
“I have always said I want to fight him and he has said he wants to come over here. Hopefully we can make that fight happen.”
It seems that fight is about to become a reality with excitement already growing ahead of an official confirmation from either camp.