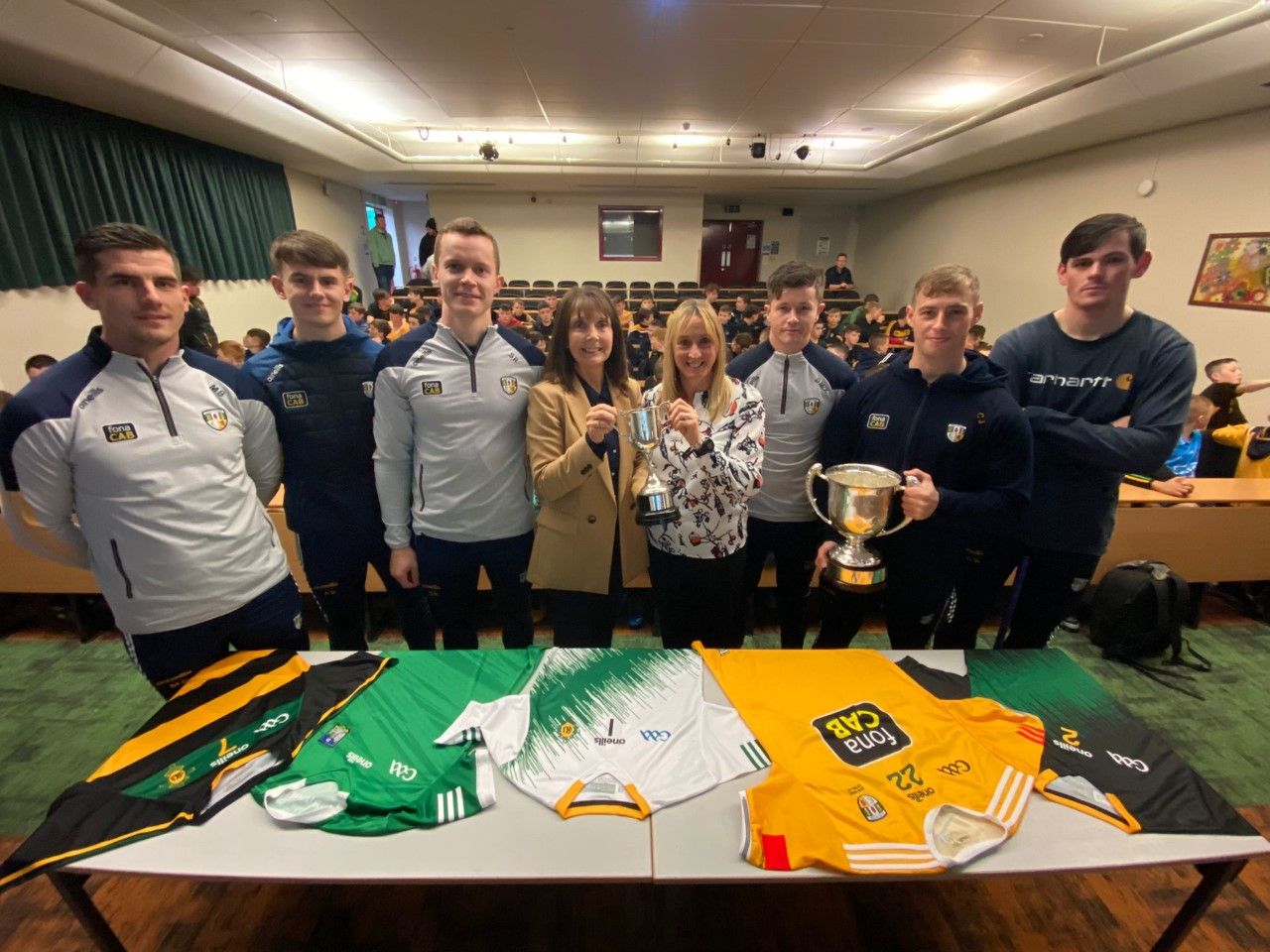 THE autumn rain could not dampen the enthusiasm of young hurlers at St Mary's CBGS on Wednesday as some past pupils and special guests dropped in for a coaching session followed by a Q & A.

Antrim hurlers: Gerard Walsh, Conor Johnston, Stephen Rooney, Daniel McKernan and brothers Michael and Aaron Bradley were all part of the squad that won the Joe McDonagh Cup earlier this summer and they brought the trophy along, but hurling's holy grail, the Liam MacCarthy Cup, sat alongside having been brought to his alma mater by Limerick's strength and conditioning head coach, Cairbre Ó Cairealláin.

All of those past pupils helped bring sporting success to the Glen Road school in their time as pupils including the biggest prize in Ulster Colleges' hurling - the Mageean Cup.

The latest generation of pupils was addressed initially by teacher, Tony Austin, who introduced the guests and explained their success in terms of Mageeans was a culmination of years of development from their first days at the school.

It was then over to Paddy Cunningham, PE teacher at St Mary's, to chair a question and answer session with all seven giving an insight into what it takes to reach the top level in hurling, whilst encouraging hard work on the field and in the classroom, emphasising good habits and team-work that is required to succeed.

"It's lovely as I haven't been back in the school since I left," said Ó Cairealláin, who has been involved with the Limerick hurlers' 2021 and 2022 All-Ireland triumphs after a spell with Tipperary where he was part of the 2019 All-Ireland win.

"I was always hurling-mad, just like all the kids that are here. Tony (Austin) was looking after us then so it's great to come back and have the same feeling that it (the passion for hurling in the sport) is still here."

Being part of such an impressive set-up as Limerick undoubtedly is a dream for many and the first steps Ó Cairealláin made into the world came during his time at St Mary's where his passion for sports science was honed.

From there, he studied Sports and Exercise Science at the University of Limerick and that time in UL coincided with the development of the Limerick Hurling Academy which has developed players that have won four of the last five Liam MacCarthy titles.

"It's been unbelievable experiences to be in those set-ups, working with the players at that level and building relationships with the people involved," said the former Antrim minor hurler who has also had spells working with the Arsenal FC academy and Arsenal Women's team.

"You have memories that will last a lifetime and all have been special years.

"I began studying at the University of Limerick when the Limerick Hurling Academy was just starting up. They put a lot of resources into having a good academy structure and that involved the strength and conditioning side of things, nutrition, psychology and of course, the hurling side.

"That is all paying dividends now, so it's been good to see first-hand what it takes for a county like Limerick that always had the passion for hurling to be able to direct that to where they are now and the success they've had."

The Treaty juggernaut is showing little sign of slowing down as they remain the team to beat heading into 2023.

Undoubtedly, players such as Gearoid Hegarty, Diarmuid Byrnes, Seán Finn and Aaron Gillane have supreme talent, but All-Ireland success takes so much more and embracing every aspect of the lifestyle required to dominate is the reason why John Kiely's men are where they are.

The development of the game is just as important and why young hurlers getting to engage with those at the top of the game is so important - a driving force behind Limerick's success today.

In 2005, just eight of 36 schools in Limerick city - a place where rugby was always viewed as king - took part in U10 Cumann na mBunscol hurling games, but the appointment of the city's first hurling development officer proved to be the spark as the numbers grew and that hard work has led to the success of today.

Belfast finds itself in a similar situation, but the ambition of Gaelfast is to boost participation that will pay off in the long run, with the Antrim Cup competitions the latest step and St Mary's took the Year 8 Cup in football last week - which was also on display on Wednesday.

A rising tide lifts all boats and young Antrim hurlers seeing their heroes win silverware at Croke Park and bring it back the clubs and schools can inspire further, but a good environment is also crucial and Ó Cairealláin can testify that Limerick have got the right blend.

"Players like Declan Hannon, Cian Lynch, Kyle Hayes and the rest of the team are all stars in Limerick," he agrees.

"While Limerick has draws to other sports, everyone there now wants to play hurling, so it will benefit them down the line.

"It's very enjoyable working with any team, but these lads embrace the whole process and love it so much.

"Anything we want to do with them as coaches, they take it all in and apply themselves. I think having come through that academy system, they have a great way about them and are very respectful in terms of communicating with each other.

"It's a really nice atmosphere and a good place where people like going to in terms of training as it's a bit of a family feel that makes it what it is."