GERRY ADAMS: Preserving our heritage in monuments and speech 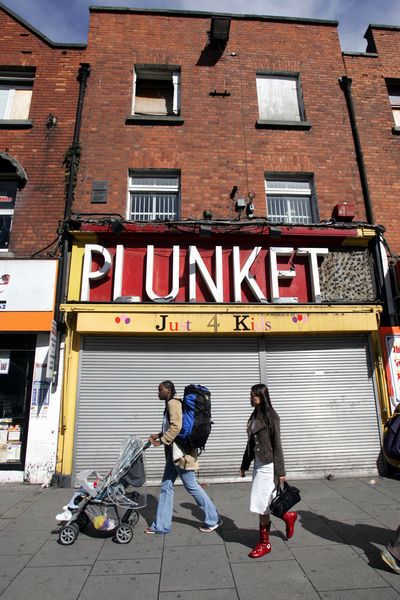 In Dublin this morning morning a unique tour of the Moore Street 1916 Battlefield Site was hosted by the well known actor Adrian Dunbar. The tour was organised by the Moore Street Preservation Trust as part of the campaign to save Moore Street from the developers’ bulldozers.

The terrace of houses from 10 to 25 Moore Street was occupied by the GPO garrison after it abandoned the blazing GPO on Friday evening April 28, 1916. Number 16 was the last headquarters of the leaders of the Rising. Seán MacDiarmada, Pádraig Pearse, Joseph Plunkett, James Connolly and Tom Clarke met and came to the reluctant conclusion that surrender was the only choice open to them to avoid further loss of life. Saturday’s tour will recall those historic events.

As well as Adrian Dunbar, several actors playing the parts of Pádraig Pearse and Nurse Elizabeth O’Farrell, Honor Ó Brolcháin (a relative of Joseph Plunkett, one of the executed leaders) will tell the story of those tumultuous events as they walk the Battlefield site.

Thanks to Adrian Dunbar, the relatives of the 1916 leaders and the Moore Street Preservation Trust for a tour of the 1916 Battlefield Site. So much of our history is being wiped away by overseas developers Moore Street must be preserved for future generations. #savemoorestreet pic.twitter.com/e7i1zxJqQy

The campaign to save Moore Street has been long and difficult. The developers have deep pockets and successive Irish governments have supported their proposals.
However, the relatives of the signatories and the relatives of those who fought in the GPO garrison support efforts to create a cultural quarter in these ‘laneways of history,’ protecting and preserving for the future this unique part of Dublin. As the relatives of the signatories put it in a recent lobby of Dublin City Council: “It is not for one generation to give away or to be left at the mercy of a developer's wrecking ball.”

In recent weeks the campaign has had several notable successes. At the beginning of the month Dublin City councillors voted unanimously to add key buildings on Moore Street associated with the 1916 Rising to the Record of Protected Structures. Developer Hammerson claimed that it would be “inappropriate and unlawful” for the Council to do this. The councillors rejected Hammerson’s claim and voted to give full protection to Numbers 10 and 20/21 Moore Street and partial protection to other important buildings. Numbers 14, 15, 16 and 17 Moore Street are part of the National Monument and are already protected – although the government has left them in a very distressing state of decay.

The decision by the Council also exposes the outrageous decision by An Bord Pleanála – the body responsible for planning decisions – to refuse an oral hearing on the many appeals that have been lodged against its decisions to grant permission for the Hammerson plans.

In a further endorsement of the stand taken by the Moore Street Preservation Trust and by the relatives of those who fought in 1916, a recent meeting of Fingal County Council unanimously called for the creation of a Moore Street Historical Cultural Quarter and backed the Preservation Trust’s alternative plan for the area. The motion recognises Moore Street as the site of the last headquarters of the Easter
Rising and “a site of National historic importance” that’s “deserving of regeneration as a cultural historical site”.

So the battle to save the 1916 Moore Street Battlefield site continues and is growing in strength. More and more people want to see this area developed as a historic quarter which would be of huge educational, economic and social significance to the people of Dublin inner city, the capital and the nation, as well as a fitting memorial to the heroism of the men and women of 1916. Perhaps I’ll see you in Dublin on Saturday morning.

In the meantime, if you want to save Moore Street write to An Taoiseach at micheal.martin@oireachtas.ie or the Department of An Taoiseach, Merrion Street, BAC 2.

IN Ireland the English we use is Hiberno English. We use Irish language constructions a lot as well as many Irish words or words based on Irish words.

As part of the colonisation of our island people London tried to destroy our native culture, music, dance and language. They failed and we Hibernised the language they forced on us. In Ulster there is also a Scots influence. Different locations have their own local phrases or words. And native place names are special. I love that. Dialects are all part of the colour and fabric of dialogue.

Many of the words or phrases involved are dying out. For example the names of farm implements or other tools which are no longer in use as farming became mechanised in recent times. Similarly with city living and the construction of modern housing and the provision of indoor toilets, bathroom, kitchens and so on. No more ‘Going out to the yard’ for the toilet or to ‘the scullery’ to cook the grub.

The advent of television also meant some people converse less. This has been accelerated recently with the widespread use of social media. Communications are  now accessible to almost everyone and this is good but  traditional story telling and the use of the spoken word is less prevalent.

I have been thinking of some words which used to be widely used when I was a wee buck. I remember as a young and reluctant scholar efforts being made to standardise the English we used. This included at St Mary’s Grammar School. We were being taught to be the lawyers, accountants, civil servants and teachers so BBC standard English was required. I failed to qualify for any of these positions. For its part the BBC frowned on local dialects.

But there were wise people in there too. Especially on the wireless. Mostly  men, you may notice, but that also was a mark of that time.  Michael J Murphy, Sam Hanna Bell, Tony McAuley, Jimmy Young, Joe Tomelty, Davy Hammond, Seamus Heaney, Michael Longley – all kept old words alive. So did the many fine Irish language poets and story tellers. Before them Alice Milligan, Francis Joseph Biggar, William Lutton, Cathal O’Byrne, Florence M. Wilson, Brian Friel, William Marshall Robert Bunting, Robert Mac Adhaimh, Cardinal Tomás Ó Fiaich and others made their mark.

Here is a sample of words which were widely used when I was younger. I may add more to this list in future columns. And I welcome any suggestions you may have.

Wee buck: Young boy. Also gossoon, cub.
Wean: A youngster.
Barge: To give off. Also a  boisterous woman.
Beeling: A cut which is discharging pus.
Blirt : A foolish but harmless person.
Scundered: Embarrassed.
Pockaill: Awkward person.
Amadán: Fool.
Glype: See blirt.
Geansaí: Sweater. Also GAA sports top.
Togs : Sports shorts, including swimming togs.
Boil: An abscess.
Bannock: Oat loaf.
Bravely: In good health. ‘He’s doing bravely.’
Polis: Police.
Brae: Hill.
Sprazzy: A sixpenny coin.
Oxter: Armpit.
Champ: Creamed potatoes and scallions mixed together. Back in the day this was the main meal, now it’s a side dish.
Cleg: A blood sucking fly.
Jiffy: A short period of time.
Geek: Look at. ‘Taking a wee geek.’
Hallion: A messer.
Cow’s  lap: Dung.
Quare: No literal meaning. Maybe derived from ‘queer’  but does not mean gay. Used as ‘Quare and big, quare and soft,’ etc. Or The Quare Fellow as in Brendan Behan’s play of the same name.
Thon or Thonder: Yon or yonder. As in thon one. Or over thonder.
Fornenst: Beside, as in fornenst the wall. Or opposite as in fornenst me.
Teeming: Pouring with rain.
Gurning: Crying or c omplaining.
Ganch: A loudmouth.
Dig: A punch.
Fair dig: A fair fight.
Dig in the bake: A punch in the face.
Gub: Mouth.
Bake: Face. Sometimes a mouth.
Snatters: Nose snot.
Slabber: A Loudmouth.
Slabbering: Offensive talk.
Eejit: Idiot.
Melt: I dont’ know the exact meaning but in the build-up to a fight between boys the term ‘I’ll knock your melt in’ was often used.
Scalp: A small splinter of wood. As in ‘I’ve a wee scalp in my finger.’
Stewmer:  Useless person.
Tube: See stewmer.