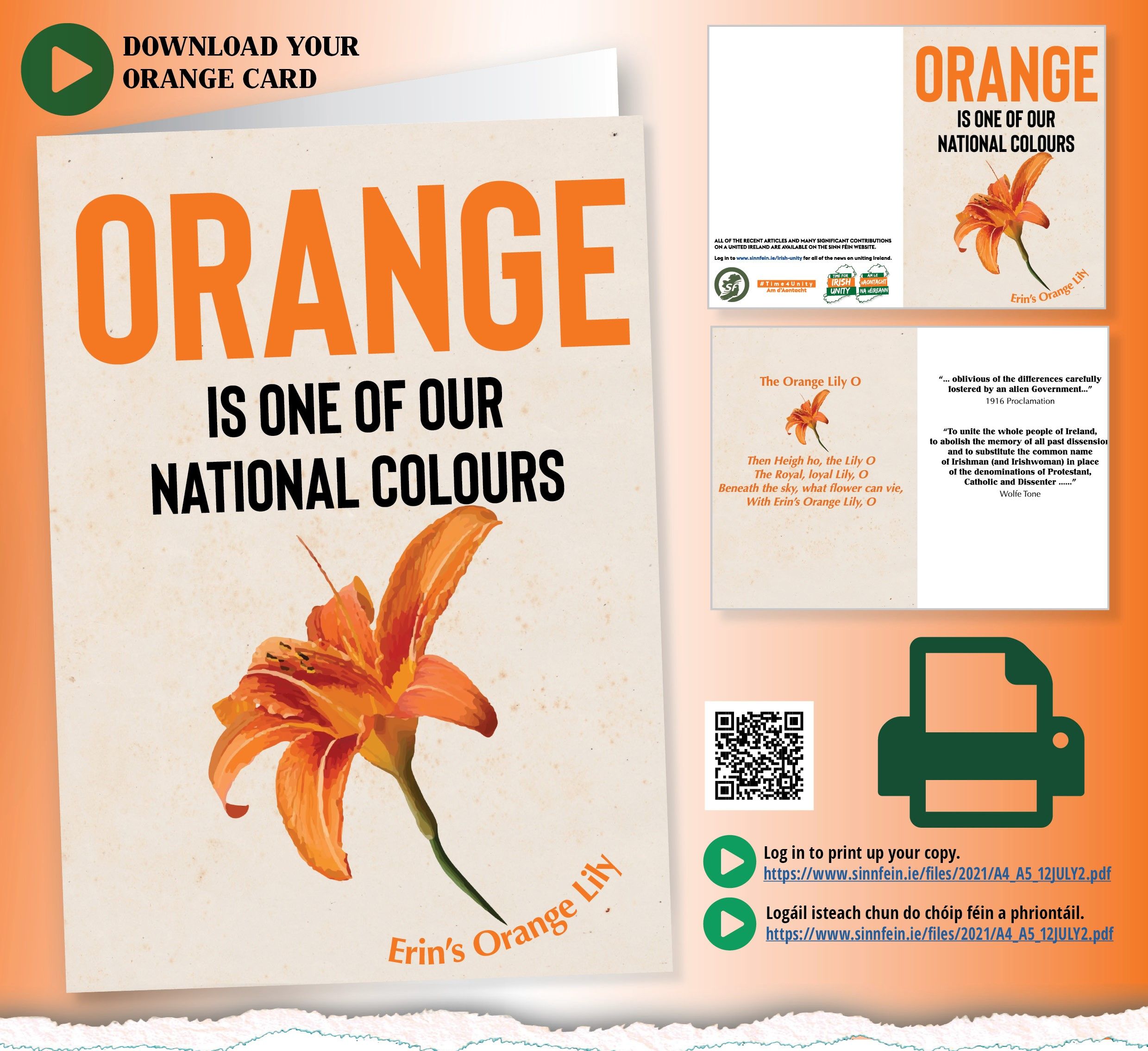 THIS is July. In the North July is widely known as the Orange Month. So I am producing an Orange Card for more discerning readers of this column (right). You can download it here and print it if you wish and send it to friends – or foes. Some readers may be perturbed by this little July initiative.

That’s hardly surprising given the history of the Orange Order and the playing of the Orange Card at different points in our history. Since its inception the Orange has been associated with sectarian triumphalistic behaviour. For a long time it was a powerful network which united the Unionist ruling class, elements of the judiciary, business and Church figures and working class unionists. Little wonder the northern statelet was known as the Orange State.

But all that has changed.

Nowadays the biggest parade in the North is for Pride. The Orange Order is no longer the powerful force it used to be. It hasn’t gone away, however, and is still embroiled in controversy, mostly in recent years arising from parades and other activities in neighbourhoods where they are unwelcome.

The atmosphere is very threatening at these events. Kick the Pope bands vie with each other, sometimes outside Catholic places of worship. Bonfires built on public highways are festooned with effigies, Irish flags, posters of politicians to be burned. Huge amounts of alcohol are consumed. On these occasions the Twelfth is celebrated by hatefests!

Because of this many Orangemen feel they are misunderstood. They do not help themselves by refusing to talk to their neighbours. Or by failing to face up to their responsibilities to bring a halt to anti-community actions. Instead some present these events as part of their culture. Burning pallets and tyres is hardly cultural activity.

PARADE THAT THREATENS NOBODY

It is true that many Orange parades, particularly in rural areas, are family occasions. A good day out for all involved. Indeed the Orange parade in Rossnowlagh in Donegal is a very good example of this. The Donegal Grand Master once explained very honestly that the Rossnowlagh parade is so successful because it threatens nobody.

The marching band is a tradition which the Orange has kept alive. Many young people are introduced to fifes, flutes, pipes and drumming through these bands. The world-renowned flautist James Galway started his musical career in an Orange band.

So there is a future for the Orange in a new agreed Ireland where it will threaten no-one. Orange is part of what we are. Its main organisation is an all Ireland organisation. It always saw itself as Irish. But they were the loyal Irish. The identification with Britishness by some unionists is a relatively recent one, though back in the day they did identify with the Empire. Maybe some still do. But the Empire is no more.

When I was a TD for Louth, while protesting in the North against coat-trailing Orange parades, I encouraged locals to make the Battle of the Boyne site a welcoming place for the Orange Order to visit. This very fine site is one of the attractions of the historic Boyne Valley. Alongside its Neolithic antiquities. It is part of our history.

Of course the Battle of the Boyne was never about religion. It was about power. It was King Billy supported by the Pope against King James and the King of France.

The Pope paid part of King Billy’s expenses and when news reached Rome a Te Deum was sung in the Vatican. The Pope supported the Dutchman William against James after the English Parliament sacked James and invited William to take on the job. James teamed up with the King of France to try and get his job back and he and William fought for it in Ireland. The Pope and the rest wanted to curb the power of France.

The Battle of the Boyne, incidentally, was fought on  July 1st and not the 12th of July. That  was then. This is now.

Orange is one of our national colours. Its future is with the rest of us of every colour and none. Equality must be our watchword. Everyone has the right to civil and religious freedom. The Planter and the Gael are the best guarantors of each other’s future in our home place.

Our responsibilty is to convince them of that. But first we have to be convinced ourselves. We are not about liberating ourselves alone.

We are for the liberation of those we disagree with. Or who disagree with us. Including those who oppressed us. We are about changing political, social and economic conditions so that they and others will also liberate themselves. That includes the Orange.

LAST weekend the families of many of those killed by British state agencies took part in protests across the North against the PPS decision to drop charges against the soldiers known as Soldier F and Soldier B.

Among them were relatives of those killed in the Ballymurphy Massacre in August 1971.  Only weeks ago the Coroner concluded after a lengthy inquest that nine men (including a local priest) and Joan Connolly a mother of eight, were entirely innocent victims. The Coroner described the use of violence by the Parachute Regiment as “unjustifiable” and “disproportionate”.

Standing beside the Ballymurphy families outside the High Court were the families of the Springhill Massacre, which occurred in July 1972.

The anniversary of that event takes place this week – July 9. In the space of a few minutes on that quiet summer’s evening, British soldiers shot dead five people. Fr Noel Fitzpatrick was shot dead as he went to administer the last rites to the dead and dying. 38-year-old Paddy Butler died after he was hit by the bullet that killed Fr Fitzpatrick. 19-year-old Martin Dudley was shot in the back of the head by a second British Army sniper and seriously wounded as he got out of a car. 17-year-old John Dougal was shot dead and his friend Brian Pettigrew was seriously injured as they tried to assist Martin Dudley. 13-year-old Margaret Gargan was shot dead by another British Army sniper. And 15-year-old David McCaffrey was shot dead as he tried to pull Fr Fitzpatrick and Paddy Butler out of the line of fire.

In the aftermath, just as they had done the previous August in Ballymurphy and in Derry after Bloody Sunday, the British Army claimed to have shot ‘gunmen’ during a gun battle with the IRA.

There had been no gun battle. No shots were fired at the British Army. All of those shot were civilians. The Springhill Massacre inquest is due to take place next year. But a question mark now exists over it and other outstanding inquests. Michelle O’Neill has challenged the British government over suggestions that it may end inquests, judicial reviews, civil cases and also prosecution cases involving British soldiers already before the courts.

It took 70 years for a British Minister to apologise for the torture, murder, mutilation and rape of thousands of Kikuyu Land and Freedom Army members (the British press dubbed them the Mau Mau). This is the context in which hundreds of families have been struggling – some for 50 years – to get truth and justice. They were never told the truth. Given derisory compensation. And frustrated at every turn to have proper inquests convened and those responsible held to account for their actions.

Poignant remembrance as Springhill Massacre is remembered on the 49th anniversary pic.twitter.com/M7oVY32fkE

Sinn Féin, families, NGOs and other parties have repeatedly raised our concerns since the Tory government started talking about an amnesty for British soldiers. The families of James Wray and William McKinney and of Daniel Hegarty plan to take a judicial review against the PPS decision. The inquest into the Springhill Massacre will probably take place next year. It could take another year to conclude.

The Springhill Massacre families are to be commended – like those hundreds of others in similar circumstances – for their courage and resilience in the face of British government intransigence.