Get on Tyrone at 4/1 to top Division One 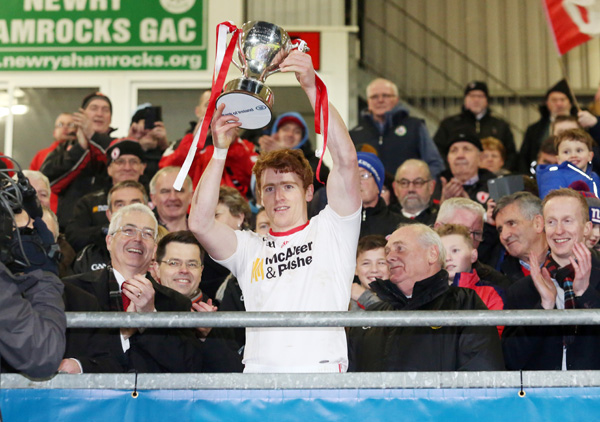 DIVISION ONE BET : Tyrone's Peter Harte lifts the Dr McKenna Cup after Saturday's nine-point win over Derry in Newry. The Red Hands are a decent shout at 4/1 to finish top of the NFL Division One standings

THE GAA begins in earnest this weekend with the start of the National Football Leagues with everyone seemingly playing catch-up to the all- conquering Dubs.

The reigning All-Ireland and National League champions are 5/4 to retain their Division One title and it will take something special to deny Jim Gavin’s men this season.

Yet, the Dubs will be without their St Vincent’s contingent, mostly notably, Diarmuid Connolly, for the early stages of the league.

Therefore, value lies in looking at who might finish top of the standings after seven games. Dublin may well defend their title but Tyrone, fresh off the back of wining a sixth McKenna Cup in succession, look a decent bet at 4/1 to top the league.

While the Red Hands end their campaign with a tough trip to Kerry, they will expect to pick up close to maximum points from their home games against Roscommon, Cavan, Monaghan and Mayo. Anything gained on the road against Dublin, Donegal and Kerry will be a bonus.

Division Two is a minefield to be avoided in terms of promotion betting.

Both Galway and Derry are minus the services of their Corofin and Slaughtneil players for the opening rounds while 4/6 favourites Cork aren’t the force they once were.

In Division Three, Armagh and Tipperary are vying for favouritism but I expect the third tier to be ultra-competitive. Longford are 11/2 to gain promotion and will be there or thereabouts, especially if one of the so-called top two flatter to deceive.

In Division Four, Seamus ‘Banty’ McEnaney can make a quick impact in Wexford and, at 4/5, they look certain to claim one of the two promotion berths.

In the relegation betting, the bookies have shortened Antrim from 5/6 a few weeks ago to 1/3.

Division Three is a big step up in class for the Saffrons and their pre-season results suggest they will struggle to avoid an instant return to the bottom tier - even with the return of ace attacker CJ McGourty.

Sligo, at 2/1, may also be destined for the drop and they have lingered in Division Three for a number of seasons without threatening to gain promotion.

In Division Two, Fermamagh (6/4) may be out of their depth, although I’d expect them to give a good account of themselves.

In Division One, Mattie McGleenan’s tenure with Cavan couldn’t have gotten off to a worse start with a host of first-team regulars declaring themselves unavailable for one reason or the other.

The Breffnimen are 8/11 to be relegated and a treble with Sligo and Fermanagh pays almost 13/1.

As for this weekend’s action, Armagh (8/11) should prove too strong for Sligo. Wicklow are a decent team at home and ought to get off to a winning start against Leitrim.

In the top tier, Monaghan look over-priced at 9/4 to defeat Mayo in Castlebar on Saturday night.

Finally, Kerry are a good price at 10/11 to claim an away win against Donegal.

A five-timer on Armagh, Wicklow, Longford, Monaghan and Kerry pays around 36/1.

We move on to the weekend racing and soccer. It is even tougher for us this week because, as we go to press, there are Premier League and Championship soccer taking place but it could work in our favour.

We start with the weekend quad and, in the Championship, we taking Newcastle (4/5) who could well take top spot if they can beat play-off hopefuls Derby at St James’ Park.

Wolves (7/5) are playing well and can make it two wins in four days when they visit Burton on Saturday as can Reading (19/10) who travel to Ipswich.

We head to Scottish League One to make the quad up and runaway leaders Livingston (13/10) are hard to ignore at Alloa.

On to the odds-on acca bet and first team down on the PG docket this weekend is our weekend banker bet Everton (8/11) who should collect all points at home to Bournemouth.

Bristol City (8/11) need points on the board quick and can bank all three against Rotherham while, in League Two, Doncaster (1/2) look a home banker against Morecambe while Accrington (4/6) should see off Notts County. In Scotland, Aberdeen (1/2) could go second if they can beat Partick Thistle at Pittodrie.

Late stoppage-time goals killed the draw trixie so hoping for better luck this week and we sit on the fence with the following games: West Brom v Stoke, Barnsley v Preston and the Watford v Burnley game.

WEEKEND RACING: On to the weekend racing and there should be a few Cheltenham pointers at Sandown where Champion Hurdle hopeful Brain Power (5/4) could face stablemate Buveur D'air in the Contenders Hurdle (1.15) while Top Notch (9/4) looks the one in the Grade One Betfred TV Scilly Isles Novices' Chase (2.25).

The Grade Three Betfred Hurdle (3.00pm) will take some winning and Tom George could have the ace in the pack with easy Wincanton winner Kk Lexicon (7/1) while Vyta Du Roc (5/1) could make it a memorable day for the Nicky Henderson stable in the Betfred Masters Handicap Chase (3.35).

Mussleburgh stage a two-day meeting at the weekend and we have come with a trixie at the Scottish track.

Gonalston Cloud (8/1) can strike in the bet365 Edinburgh National Handicap Chase (2.05) while  Cliffs of Dover (2/1) who could turn up in Bet365 Scottish Triumph Hurdle Trial Juvenile Hurdle for the Paul Nicholls yard.

FOR the Atlanta Falcons, this is their second time in the Superbowl while the Patriots will be making their ninth appearance. Patriots quarterback Tom Brady (right) will be playing in his seventh Superbowl. Experience is key in big games and the Patriots have the upper hand.

The Falcons have a trend going weeks known as ‘The Brotherhood’ which has not only hyped their game, but brought them closer. This is a big thing for a team with very little experience and they’ll need to trust one another.

Their quarterback Matt Ryan has played exceptional football this year and has been nicknamed ‘Matty-Ice’ for how calm he is when under pressure. He also has future Hall Of Famer Julio Jones to throw to who has been punishing defences throughout the playoffs with 247 yards and three touchdowns in the last two games. Jones will be a huge difference maker this Sunday and he will be playing against Superbowl 49 hero Malcom Butler.

The Patriots have been dominating teams with ease for years, mainly due to head coach Bill Belichick who works his players like they are in the military. He has won four Superbowls with Tom Brady and plans to make it five. Belichick has been a mastermind at finding players off the street and turning them into stars. He has done it again this year with new wide receiver Chris Hogan. Hogan could be the difference in Sunday’s game as he has had an amazing playoffs with 275 yards and two touchdowns in his last two games. They also have running back LeGarrette Blount, who has been scoring touchdowns like Moussa Dembele scores goals.

Both teams have great offenses and multiple great players that love to score and dance like my granny when she wins bingo. The game may come down to who has the better defence and special teams. The Patriots have the fourth overall ranked defense, whereas the Falcons ranked sixth.

Overall, this seems to be a very even match up, right?

No. The Patriots are going to win and upset everyone who is tired of seeing Tom Brady hold up the Lombardi Trophy. Most of America would love to see the Falcons win. They deserve it more. But the NFL doesn’t reward the team that deserve it the most. The New England Patriots will once again win the Superbowl due to their experience and lack of nerves.