Gormley is confident Reds can bounce back 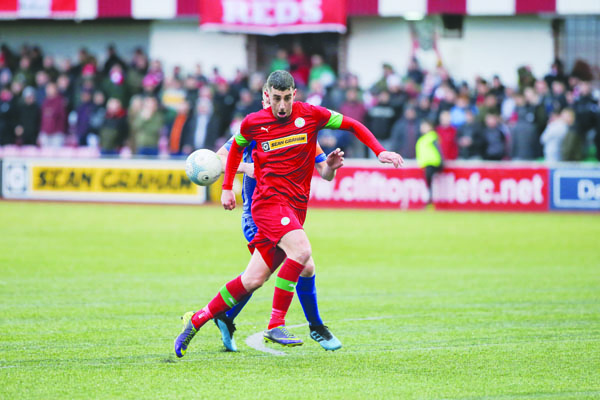 JOE Gormley believes it is up to him and his team-mates to address their recent run of ‘poor’ results in the league.

Since sitting top of the table on January 1, the Reds have managed just four points from a possible 15 and find themselves nine points behind leaders Linfield – albeit with a game in hand.

Gormley has contributed 23 goals this term and isn’t ruling anything out from his team-mates in the later stages of the campaign.

“The results this season have largely been outstanding and the players in this team are incredible but the last few results have been poor from ourselves,” reflected Gormley.

“It’s up to us to fix it. Hopefully, come Saturday at Ballymena,we’ll be firing on all cylinders and hopefully we can get the three points because they’re important. It’s a great league to be involved in this year.

“As much as we’re far behind, you can never rule it out and we’ll keep fighting to the end.

“The never say die attitude that the boys have and who knows, at the end of the season we could have Europe, we could be close enough to the league title.

“The hard work has to start now because the last few results haven’t been so good for us and with the next few results, hopefully we can get back to winning ways and who knows where it could take us?”

Gormley played a spectator’s role at the weekend as a young Reds side defeated Drogheda United 4-1 in a friendly at Solitude and the 30-year old is hoping he can return at the weekend firing on all cylinders.

“It’s always good to get a break because it’s good for the legs as well – I’m getting on a bit,” Gormley joked.

“It’s always good to get a rest, Paddy (McLaughlin) pulled me aside and told me that I wouldn’t be playing today. It was a joy to watch today while I wasn’t playing, sometimes you do need that rest and hopefully I can come back on Saturday firing on all cylinders.”

Gormley was full of praise for youngsters Odhran Casey, Donal Rocks, Peter McKiernan and Calvin McCurry – all of whom featured against the Drogs and impressed the clubs talisman.

“The game today was important because we’ve got a big squad. It’s good for boys to get a chance and maybe claim their spot in the team, which they deserve to be fair.

“They’ve worked hard off the pitch in the training ground and today shows the class we’ve got in the youth as well as the first team.”

It was 17-year old Calvin McCurry who caught Gormley’s eye most of all and the former Peterborough United striker is confident the future is bright for the youngster as well as Cliftonville’s youth under coach Brendan Lynch.

“It’s only a matter of time before Calvin gets his chance,” Gormley predicts.

“He’s outstanding and works hard every day in training, the future is definitely bright for Calvin McCurry whether it be at Cliftonville or across the water.

“The youth set-up that Cliftonville are producing at the minute, the players are outstanding and it’s a credit to Brendan (Lynch) and the team of coaches.

“You’ve boys coming through like Odhran Casey. We’d Stephen McGuinness, I think he’s only 16 and he came on today. Donal Rocks is a super player and the whole youth team is just getting better and better. The future looks bright for Cliftonville.”

As well as being involved in the race for the Gibson Cup, Gormley has one eye on completing a full set of domestic honours with the Irish Cup.

The Reds take on Dungannon Swifts in the quarter-final next weekend and is hopeful the Reds will be involved in the later stages of the competition.

“The Cup is massive for us as well,” says Gormley.

“We’re playing Dungannon Swifts and it’s going to be a tough game. Hopefully if we get the attitude right and keep working hard on the training ground, we’ll be able to progress to the later stages of the Cup.”