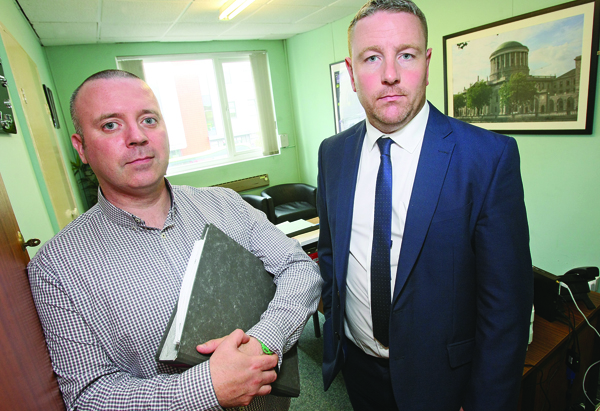 A BELFAST-based law firm have won what they are calling a “ground-breaking shift in the benefits appeal practice” after they secured a list of written questions for one of their clients who is facing a PIP tribunal.

Until now, benefits appeals tribunals have either taken the form of oral hearings in which the appellant faces a panel of either two (ESA) or three people (DLA & PIP) and sits through a session in which intimate questions are put to him/her for a period of approximately half an hour.

Many appellants, particularly those suffering from anxiety and mental health related conditions, find the process extremely daunting and taxing with some deciding to forego their legally entitled benefits as opposed to turning up at all.

Michael Brentnall of Michael Brentnall Solicitors said: “Appellants can opt for a ‘paper hearing’ in which a panel will consider all evidence in the appellant’s absence, but these are generally considered to be of little worth to the appellant as it denies them the opportunity to specifically stress and explain the negative affects which their condition has on them.

“In January 2018, our firm – representing a client in the course of a Personal Independence Payment (PIP) appeal – requested instead that the Appeal Service provide a list of written questions which could be considered at home and relayed back to the panel by our qualified Tribunal Advocate, a significant break from general protocol.

“On January 26 the Appeal Service in an official response stated that ‘they were not in a position to furnish a list of written questions’ stressing that ‘there are no specific lists of written questions that tribunals ask. This was in keeping with what we believe to be general protocol in the north, England, Scotland and Wales until now.”

Mr Brentnall continued: “In response to the refusal of the Appeal Service, our firm initiated ‘pre-action protocol’ proceedings – a precursor to official Judicial Review proceedings – requesting again that written questions be provided to the appellant and citing the findings by the Court of Appeal in the employment related Bombardier case of 2016, which stressed that ‘consideration should be given to the need respondent’s counsel to offer cross-examination and questions in writing’.

Although the Bombardier case took place in the context of an employment tribunal procedure, it was the opinion of Michael Brentnall Solicitors that the very same principle should be equally applicable in the area of benefits entitlement.

Mr Brentnall continued: “In March the Office of the President of Appeals Tribunals Northern Ireland made us aware that they had overturned the decision to refuse us a list of written questions, then on June 8 the same office provided us with a list of relevant written questions and inviting a written response stating that ‘We wish to proceed on that basis given that Judicial Review proceedings had been indicated.’

Commenting on the decision he said: “A precedent has been set by the decision of the Office of the President of The Appeals Service, in particular to their reference to Judicial Review proceedings which were to proceed along the principles decided during the course of Galo v Bombardier.

“This precedent should now secure for others the right to have benefits appeals heard and contested via the format of written questions and answers.

“We would hope that this shift in protocol will go some way to help people who due to illness or vulnerability feel unable to attend what for many is an extremely daunting and taxing process.
“We would encourage any persons who wish to seek assistance in such matters to seek professional legal advice in order to achieve and secure their rightful entitlement.”