Half Moon fáilte for Syrian guests 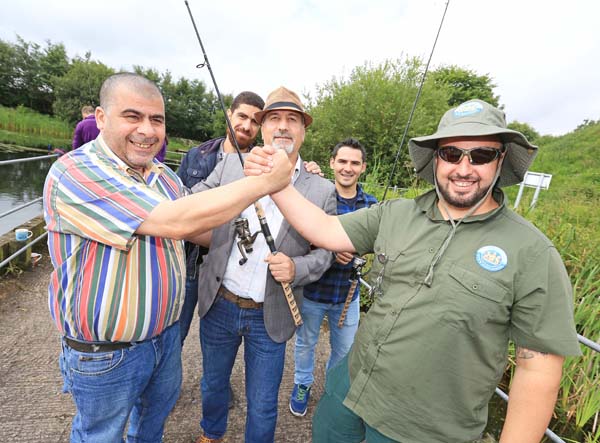 VISIT: Syrian visitors and hosts at the Half Moon Lake

LENADOON Community Forum has hosted a delegation of Syrian refugees at the Half Moon Lakek. Cairde Loch na Leathghealaí and workers from Belfast City Council put on a day’s event for men from Syria who were forced to flee their homeland due to the conflict there.

On their arrival at the Half Moon Lake they were welcomed by Sean Lennon and Pádraic Mac Coitir of the Cairde Loch na Leathghealaí.

They were shown around the site where they got to sample a host of activities available there, including the opportunity to do a bit of fishing.

“The fish they caught were tiddlers but they will be back to catch bigger fish!” laughed Committee Member Padraic Mac Coitir. “Micky McCorry, who thinks he's a Michelin star chef, excelled with his dish of lamb stew. To accommodate our guests it was halal meat and all of us thoroughly enjoyed it. And of course there was the quintessential Belfast bap to go along with it!

“We have all seen the terrible images from Syria and other countries in that part of the world and it's an absolute disgrace the number of civilians being killed. Millions have been forced from their homes – homes in which generations of their families lived and never thought they would leave. On their travels to relatively safer countries many have died as they were turned back at borders of countries that don't want them. Thousands have drowned at sea when boats they were in capsized because of the numbers on them.

“It is disgraceful when I hear some Irish people say refugees aren't wanted here. People need to bear in mind that when the English invaded this country millions of Irishmen, women and children were slaughtered, died of starvation and were driven out of the country. Our ancestors were also forced to go to foreign countries and settle in with nothing more than the clothes on their backs.

“Should we welcome refugees? My answer is a clear yes. This is a country of six million people and at one time the population was almost ten million so there is plenty of room for millions more. Vast swathes of land are 'owned' by absentee landlords, which could and should be returned to us. So when we hear of people forced out of their country due to conflict we should embrace them instead of saying no to them.”

Community Engagement Officer Aiden McGary explained: “Barnardos charity approached us asking if we could put these people in contact with community groups and volunteer projects in West Belfast to intergrade them into their local community.

“We contacted Paddy who agreed to show them around the Men’s Shed at Half Moon Lake and perhaps get them involved with the group in some way.”

Colleague Lorraine Smyth added: “These people are part of the Vulnerable Persons Relocation scheme, Syrian refugees who came to live in Belfast about a year and a half ago, and we are hoping by getting actively involved in their communities it will help them develop their English and other skills to help make them feel welcome, after all this is their home now.”

During the visit the Syrian men saw demonstrations of the recycling and upcycling members engage in with pallets and other material as well as fishing at the lake and other outdoor activities.

At the end of their visit they were served a traditional Syrian meal by Micky McCorry from Belfast City Council and they then shared their stories with those present.