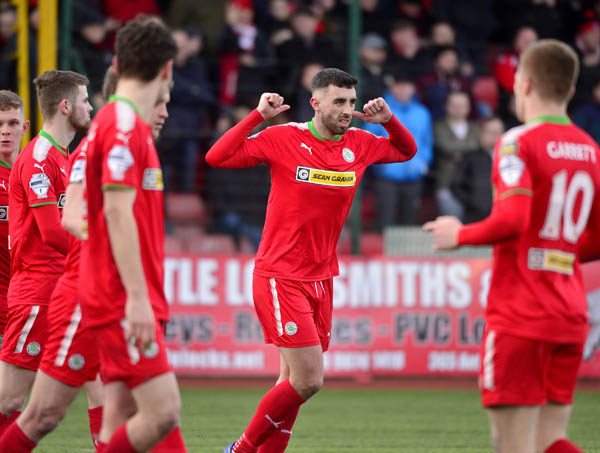 HAT-trick hero Joe Gormley paid tribute to the contribution of his teammates as he proudly held the match ball in the aftermath of Saturday’s Tennent’s Irish Cup victory over North Belfast rivals Crusaders.

Gormley twice struck from the spot and had strike partner Rory Donnelly to thank for laying the third on a plate on 56 minutes.

Gormley’s first penalty of the afternoon was saved by Brian Jensen, but a retake was ordered by referee Raymond Hetherington as Declan Caddell failed to leave the pitch in the aftermath of his red card and Gormley joked he missed his first spot-kick because he knew he would have a second bite at the cherry.

“I’m just happy to score and to be honest, it’s down to the boys that’s put it on a plate for me - I can’t thank them enough,” Gormley reflected.

“Rory (Donnelly) asked me if he could take the first penalty. I told him I was the penalty taker and I knew I was going to have to retake it anyway – that’s why I missed! I hadn’t a clue what was going on, I was actually so glad I got the chance to take it again.”

Since his return in August Gormley has netted 21 times, but has been criticised for a few lean spells.

However, the 28-year-old says his goal tally speaks for itself and is confident in his ability to push on and add to his account in final months of the season.

“It does and it doesn’t annoy me, sometimes I just try and get on with it, but I’ve scored 21 goals this year and it speaks for itself,” said Gormley.

“I’ve spoken to Barry (Gray) and I don’t think I’ve played the best that I could play, but I’m scoring and hopefully when I do push on I can score more. In the past few games, Barry gave me a bit of stick for not scoring and I’ll keep trying for the team and scoring as well.”

Gormley was the first player to claim the match ball in the North Belfast derby since Chris Curran back in April 2014 and the striker revealed that it meant a lot to him, especially with his mum, other family members and girlfriend being in attendance.

“It means a lot to me, especially with my mum in the crowd,” revealed Gormley.

With an Irish Cup quarter-final on the horizon and still in the race for third spot in the league, Gormley believes it is time for the critics to get off their back and start appreciating and giving some respect.

“We haven’t been playing too well in the league,” Gormley acknowledged.

“But we’re in the semi-final of the League Cup and have just knocked Crusaders out of the Irish Cup. I think people want too much at times but that’s just football. When you look at our team it just speaks for itself. We’ll take anyone and today I’m sure everyone will be talking.

“It’s about time that people got off our backs and started appreciating how good we are and giving us the respect we deserve.”

Gormley was also quick play down the famous cup hoodoo around Solitude as the class of 2018 try to chase down that elusive Irish Cup success.

“The players don’t talk about this cup hoodoo,” added Gormley.

“We just go into every game and try and give it our all and hope for the best. I think that in all the years since Cliftonville won it, that’s the past and we’re trying to push forward for the future and hopefully we can win it this year.”