Grieving son hits out at police presence at Divis wake 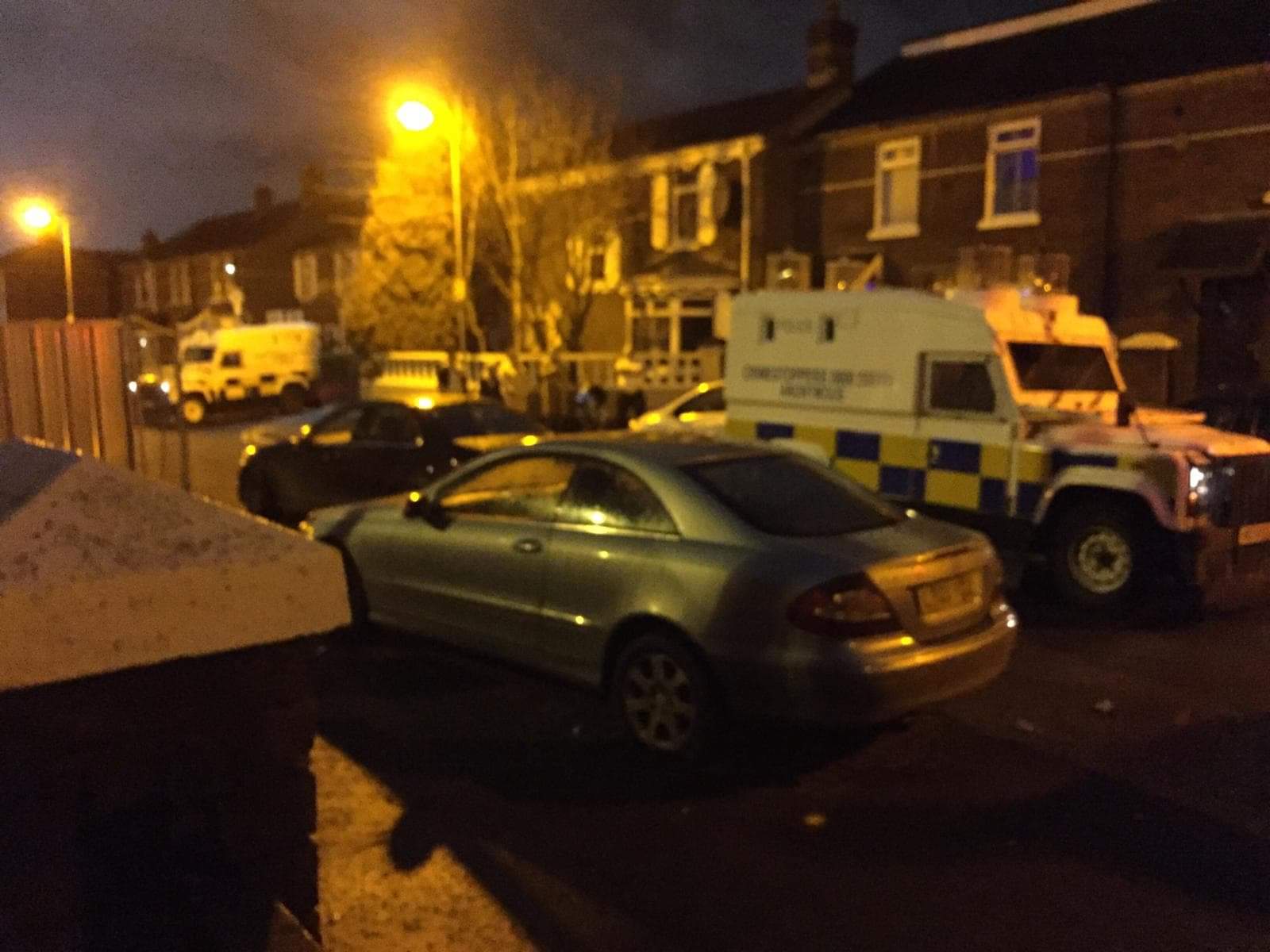 A GRIEVING son has hit out at the PSNI for its heavy presence at his mother's wake in the Divis area last night.

Up to eight police vehicles, including six armoured Land Rovers, swarmed the family home of Karen Weir, who passed away earlier this week.

The large police convoy travelled up the Grosvenor Road before taking up positions outside the property on Cullingtree Road.

Mourners said that officers had threatened to enter the wake house, while a local political activist was reportedly stopped and searched after leaving the home.

It comes just two days before the Weir and Fitzpatrick families prepare to lay Karen to rest.

Karen's son, Gerard Fitzpatrick, said that the wake had adhered to government Covid restrictions, with limited numbers allowed inside the home.

A number of mourners who had gathered outside the family home were also advised to adhere to social distancing and to wear face masks.

"My mummy was a well respected woman in the area, and if people want to go and pay their respects to her they can do it," he said.

"The way those cops came last night – a cavalcade of six peeler jeeps while they had TSGs waiting on the Grosvenor Road – they came there to try and get people's backs up, and that's what they did, they got people's backs up.

The way those cops came last night – a cavalcade of six peeler jeeps while they had TSGs waiting on the Grosvenor Road – they came there to try and get people's backs up, and that's what they did, they got people's backs up.

"Whenever our neighbours started challenging them they changed their tune. They asked 'how many's in there?' and said 'we'll make our way in and find out.'"

He added: "How people can support them (the police) is beyond me."

Gerard said he felt his mother's wake was targeted by police due to the presence of local republicans.

"That's the reason they did it," he added.

"The cops are saying there were people outside the house and that's why they made the approach, but they could've done it in a different manner."

"The PSNI said they were responding to a report, which we know is what they are using as the excuse for their presence last night," he said.

"Even so, is that how they usually respond to a report? By sending eight Land Rovers?"

He continued: "At a time when the PSNI are claiming to be short in numbers due to Covid sickness, how did they spare so many resources in a very short space of time?

"It is clear that this was a premeditated attack on a grieving family and on the community as a whole, and those who claim to hold these people to account have serious questions to answer."

In a statement, the Falls Residents’ Association branded the police actions as “shameful”.

“The shameful response from the PSNI this evening was avoidable to say the least,” a spokesperson said.

“This type of policing does no one any favours and only serves to raise tensions.

“We are disappointed that the established contacts within the community were not used including local politicians, community reps and clergy.

We are disappointed that the established contacts within the community were not used including local politicians, community reps and clergy.

“There was no need for the high volume of PSNI in attendance, particularly at a time when a family are grieving. This in contrast to the actions of the PSNI in their response to ASB (anti-social behaviour) in the area including Dunville Park and leaves a lot to be desired.

“We fully understand the restrictions around the Covid Regulations and this issue will be raised with local representatives in the coming days.

“Our condolences are with the Fitzpatrick family at this time.”

People Before Profit MLA Gerry Carroll branded the police presence "a disproportionate use of power".

"The images and video footage of PSNI Land Rovers surrounding a wake house last night in the Divis area are disgraceful," the West Belfast MLA said.

"This is no way to treat a grieving family and clearly stands in contrast to the policing of all manner of different events and gatherings over recent months.

"Every sensible person understands the need for health restrictions, not least those who are saying goodbye to loved ones at this incredibly difficult time.

"When the PSNI target a grieving family in this way— after ignoring neglect in our care homes, dangerous employers, or government ministers breaking advice— they are culpable of a disproportionate use of power.

"My thoughts are with those impacted by this."

PSNI Chief Inspector Christian Bradley said: “While on patrol in West Belfast on Thursday evening, officers noted a number of people congregating at a property on the Cullingtree Road. Officers subsequently called at the property and spoke to family members who explained they were holding a wake.

“In keeping with our ongoing approach, officers explained the Health Protection Regulations and the law, and a number of non-family members left the property with no further police action required.

"We understand and sympathise that when a loved one dies it is a very traumatic and sad time, and that a funeral and wake is part of the grieving process and allows people to say their goodbyes and pay their respects. However, it is essential that everyone respects the current health and current legislation.”

Requiem Mass for Karen Weir will take place on Saturday at 10am in St Peter’s Cathedral, but will be limited to 25 people.