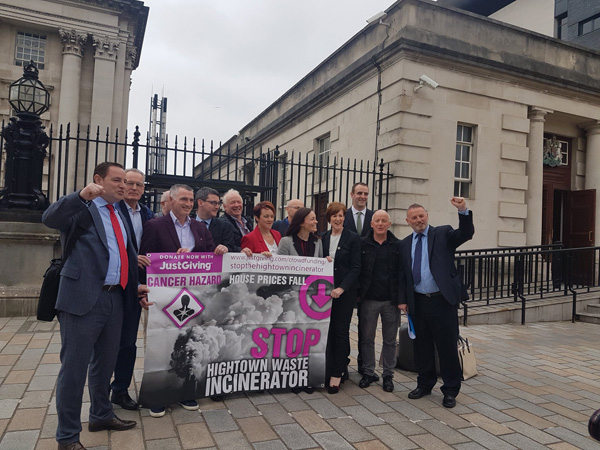 Caption: Campaigners from NoArc21 and local politicians celebrate the ruling outside Belfast High Court on Monday

A CAMPAIGN group has welcomed a High Court decision to quash planning consent for a proposed 300,000-tonne waste incinerator in Hightown.
On Monday, No-Arc21 won its judicial review legal challenge against planning permission for the incinerator, which was granted by the Department for Infrastructure (DFI) in September 2017.
The court ruling found that the DFI Permanent Secretary Peter May did not have the appropriate lawful authority to issue the planning consent in the absence of a Minister in charge of the Department.
The decision effectively quashes the planning consent and marks a huge victory for the thousands of objectors to the £240 million incinerator project.
Colin Buick, Chairperson of No-Arc21, said, “We are delighted with this decision today. We successfully argued that in the absence of a Northern Ireland Executive DFI Minister or replacement NIO Direct Rule Minister that the Permanent Secretary at DFI did not have lawful authority to issue the planning approval.
“We are grateful to the judge and the court for their consideration and this decision.
“We have always said that there is no strategic requirement for the incinerator is in excess of what is required and will result in overcapacity.
“We hope that the judgment will act as a wake-up call to DFI.”
Local SDLP Councillor Noreen McClelland commended the efforts of the community group No-Arc 21 for their campaign efforts.
“The relentless efforts of the community to stop these plans in their tracks is extremely commendable,” she said.
“The ruling was welcome news for the entire Newtownabbey and Mallusk area, and it is particularly encouraging to see the law vindicate the concerns of the residents.
“It is, however, disappointing that the residents had to rely upon the law in this case in the absence of a functioning Assembly. What is clear from this judgement is that local people need locally accountable government.”
A spokesperson for incinerator company arc21 said: “Arc21 is disappointed by the ruling. We will take time to consider the judgement in detail and consult with our stakeholders.”