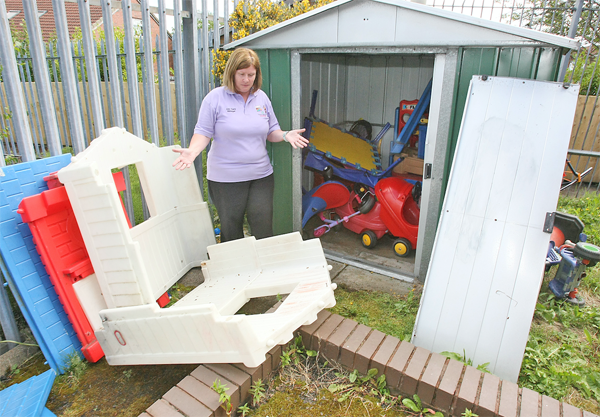 Daycare Manager Siobhan Connolly, was opening up the day care facility on Tuesday morning after the bank holiday weekend when she realised they had a break in.

STAFF at Trinity Day Care in Norglen Gardens say they are ‘fed up’ with the ongoing anti-social behavior they are facing.

Daycare Manager Siobhan Connolly, was opening up the day care facility on Tuesday morning after the bank holiday weekend when she realised they had a break in.

She said: “It’s an ongoing issue with youngsters, and when I say youngsters I’m talking very young, not even teenagers. It’s ok people saying to go to the police but you’re talking about kids under the age of ten sometimes, although I don’t know if ten year olds would be able to rip doors off the storage shed to be honest.”

“We try not to keep anything outdoors and we thought this wee storage shed we keep out the back would be safe enough but they’ve actually bent the doors right off it, then they jumped on the roof and flattened it, it’s just mindless vandalism, I mean look at what happened with the Bunscoil recently and their break-ins.

“So we had to just try and hammer the doors straight and fix them back as best we could, we have had to throw the bikes and stuff out as they are now a danger to the kids.”

Siobhan says as well as constant destruction young children also put the bins up against the walls to gain access to the roof.

“We have tried chaining the bins up but they always manage to get them up against the wall and climb onto the roof, then once they are up there they use the children’s bikes to go down the slope on the roof, they could end up killing themselves.”

Siobhan says that because the daycare facility is part of a community group that they are already struggling financially.

She said: “Our parents already pay for their childcare here, things are tough enough, we can’t ask for them to give us money to replace the stuff, I think we will have to do a bit of fundraising ourselves or ask people to donate old bikes and toys. We are a wee community group we haven’t got the money to just keep replacing things, it’s really frustrating for us, you want to cry sometimes but unfortunately this is just a sign of the times I suppose. I mean I wouldn’t be surprised if it happens again. It’s almost like you just have to accept it now.”

After visiting Holy Trinity Day Care and witnessing first hand the vandalism Pat Sheehan condemned those responsible for the wanton destruction that was caused during a break in at the centre.

He said, "This is the latest in a series of incidents at the Day Care centre in which facilities and equipment have been damaged or destroyed.  The workers in the centre are in no doubt that local young people are responsible for the theft and vandalism that has taken place in recent months and I am calling on them to stop this activity now.

“I would also ask residents who live close to Holy Trinity to be vigilant, and for the PSNI to increase its patrols, particularly when the centre is closed.”