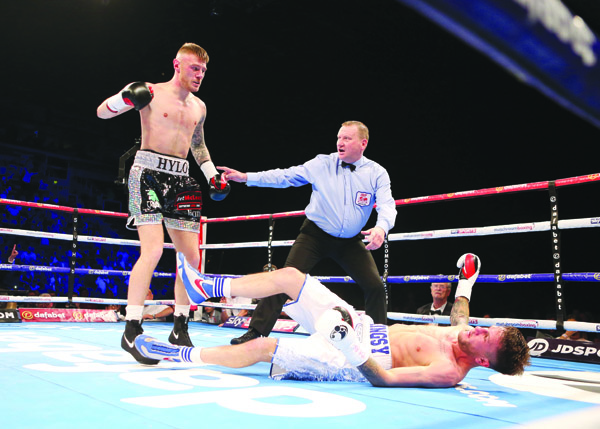 WHILE Ryan Burnett and Zhanat Zhakiyanov’s bantamweight unification tops the bill at the SSE Arena on Saturday, the fight of the night could well be the all-Irish clash for the IBF European lightweight title between Paul Hyland Jnr and Stephen Ormond.

This is an intriguing match-up between the up-and-comer in Hyland against Dubliner, Ormond who is drinking in the last chance saloon after a stellar career.

‘Hylo’ has earned a reputation for being involved in firefights and his last outing against Adam Dingsdale at the SSE Arena was supposed to be his toughest test.

However, the Mount Eagles man showed a new side to his game, blasting out Merseyside’s ‘Dingsy’ in the first round to show he has the power to compliment his fighting heart.

“I was told, on paper it was going to be my toughest opponent to date,” he recalls.

“But I went in and caught him lovely, rocked him and took the opportunity to get him out of there. I was planning to put the pressure on early and was ready for a tough night, but I just caught him and finished it.”

This Belfast v Dublin showdown is highly unlikely to be quite as straightforward.

Ormond is a tough customer although has been showing signs of wear and tear of late, but his fighting pride in this all-Irish affair will surely keep him coming.

However, while respectful of ‘The Rock’, Hyland believes the graphs are moving in opposite directions and he is confident of victory.

“I feel like I’m coming up in the rankings,” said the popular 27 year-old.

“I have a lot of respect for Ormond and always backed him as a fellow Irishman and he has done a lot in his career, but I feel I’m the younger one coming through here and it’s maybe time for him to step aside. I want to prove that on the night.

“Either it’s him coming here, finishing up (in boxing) or he is looking to make a big statement. Either way I’m going to be ready and will make sure I’m keeping the belt.”

Ormond is a former WBO European champion, defending I several times including a victory over Derry Matthews before losing it against current world champion, Terry Flanagan.

The 34 year-old has lost two of his subsequent nine fights including last tie out against Craig Evans at the Waterfront Hall for the WBO Euro strap when he ran out of gas and was dropped twice in the 10th.

This is his chance, possibly his final chance, to get back on the title trail and he says it is a fight he couldn’t refuse.

“When I heard about this fight I jumped at it and the bonus that it’s on Sky, so it should be a really exciting fight,” he said.

“This is a big opportunity for me to get a belt and the big audience on Sky Sports.

“I don’t mind going in at the deep end because a better opponent brings the best out of me. I’m buzzing for this.”

Hyland is another man who is enjoying the exposure of boxing on a big Matchroom card.

This will be his third straight fight live on Sky Sports and having built his career on the small-hall circuit, the big stage is most welcome.

“It’s a brilliant card to be on,” he agrees.

“There are two world champions here in Ryan and Zhakiyanov going head-to-head with their belts on the line. The undercard has some big names, so it’s a great night of boxing.

“I’m starting to get used to the exposure now. It’s a different buzz between these and the smaller shows. The whole build-up to it is brilliant.

“Mark (Dunlop, manager) has backed me all the way and told me to bide my time and he would get me the big opportunities. Now I’m getting these big fights, I want to take my chance.”