Ifs and buts and the toss of a coin 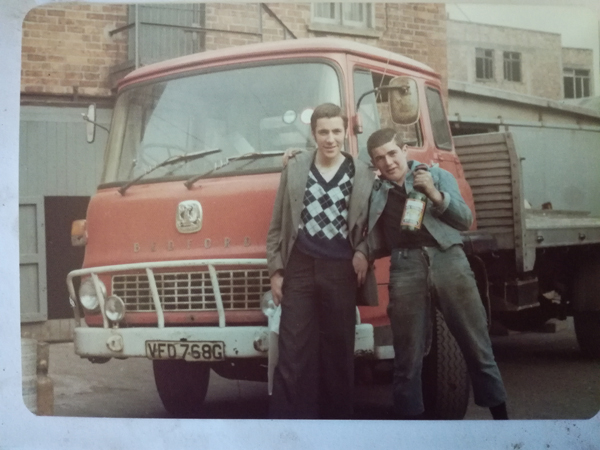 FRIENDS: A photo of Paul McDonald with Gerard ‘Coke’ Grogan, right, beside the Bedford TK lorry, driven by Frank Tierney, in the yard of Casey’s Bottling Plant, taken just months before the shooting

THE story of a lorry driver who survived a shooting in his workplace that killed two young men from Sailortown in 1975 is to be told in a new book.

By good fortune Frank Tierney was not in the yard of Casey’s Bottling Plant in Millfield on the morning of shooting on Thursday October 2 1975 which claimed the lives of four workers, including Sailortown men Thomas ‘Tucker’ Osborne (18) and Gerard ‘Coke’ Grogan (17). Frank’s story is one of a number which has been put together for the release of a tribute book of testimonies from family members and friends of Thomas and Gerard which is to be launched this weekend in Sailortown.

Frank, who is now 76-years-old worked for Casey’s for over twenty years, recalls that day when fate determined who was in the yard that morning when the gunmen arrived.

“My main job in Casey’s was to drive the old Bedford TK lorry, making deliveries to pubs, clubs and off licences. I always had one of the young lads on board as a helper,” explained Frank.

“Every Wednesday for thirteen years I delivered to Casey’s off licences in Derry and Coleraine.

They would ring in their orders on Monday. We would load up the old reliable Bedford on Tuesday and drive up to them on Wednesday morning.

“On the day of the shooting that routine was changed which was fortunate for me and whoever was to go with me in the lorry that day.

“The off licence in Derry, was due to be sold that Wednesday. If the sale went through, it meant that we would not be delivering to Derry, only Coleraine. It wasn’t until mid-afternoon that word came through that the sale went ahead. Frances Donnelly asked me if I wanted to go on up to Coleraine that afternoon. As it was getting a bit late, I knew that we would not get back to the yard until after seven, so I told her that Thursday would be better. Frances gave me a choice that day and the choice that I made, saved my life.

“On the Thursday morning we done a bit of tidying up around the yard and got ready to leave with the drink order. I didn’t know who was coming with me, it could have been any of the three lads, Thomas, another lad called Paul McDonald, and of course Gerard (Coke).

“The owner, Sam Casey needed some pallets fixed, so that meant that Thomas was not going to go with me, because he was the best man for repairing pallets. That left two of lads to pick from, Paul and Gerard.

“For some reason none of them wanted to go out that day and to settle matters Paul tossed a coin to see who had first choice, Gerard won the toss and he chose to stay in the yard.

“It wasn’t really a big deal for Paul, he went into the store, got his jacket and that was us, we got into the lorry and left the yard, heading for Coleraine.”

Frank and Paul headed off for Coleraine but little did they know what was to happen back in Belfast.

“We found out later that we had only left the yard shortly before the gunmen arrived. For me, it was just another normal day. We were oblivious to the fact that while we were happily cruising along the motorway that gunmen had slaughtered our work colleagues and friends, back in Casey’s.

“About an hour and a half after leaving Belfast I went into the off licence to speak to the manager. I took a phone call – ‘Frank, they are all dead’. I didn’t catch on what he meant, but it soon became clear and he asked who was with me. I told him that Paul was with me.

“That confirmed to Vincent  that it was Thomas and Gerard who had been shot. Vincent was married to Marie, one of Sam Casey’s daughters, who worked in the upstairs office along with her sister Frances. Vincent happened to go in to the yard, unaware of what had happened, he saw one of his workers lying dead and when he went upstairs to the office he was met with an absolute blood bath. His wife and her sister had been brutally murdered.

“I drove back to Belfast in the lorry along with Paul, but I have absolutely no memory of the journey or the conversation between us, but I do remember going to the yard and getting the gates opened so I could drive the lorry in.

“When I got into the yard there was blood everywhere, even on the fork lift. There was no one about, but I had no sooner got the lorry parked up, when newspaper reporters started to arrive outside, looking for interviews.

“Thomas was seriously wounded and after treatment in hospital, was released after about two weeks. I know that Sam Casey was elated at the fact that Thomas had survived and was on the mend. Sam’s elation soon turned to deep sadness, Thomas died from his wounds exactly three weeks after he was shot.

“The gunmen who went into the yard that day and shot my friends down like dogs have to bear the absolute responsibility, but fate played a role, as to who was in the yard when the murderers arrived.
“The destiny of at least nine people was decided that day. The survival of the workers who would normally have been in the yard every single Thursday and the slaughter of those who happened to be there, was a matter of “ifs and buts” and for Gerard it was the outcome of a simple toss of a coin.

“Yes, the outcome of the toss of a coin sealed Gerard’s fate, but saved the life of another worker. For Thomas, it was his skills at repairing wooden pallets that meant that he was working in the yard that morning.

“I also think of the salesman who had been in the yard on business that morning and left just as we were driving out the gate.

“Sam Casey, whose two daughters were murdered, would also have been in the yard that morning had he not have been in the Mater Hospital where he was recovering from a minor operation.”
The tribute book will be launched this Sunday (October 21) in the Mission to Seafarers Centre in Sailortown, soon after a plaque unveiling at 3pm at St Joseph’s Church in Sailortown.