In a Lebanon camp, Palestinans wait and hope 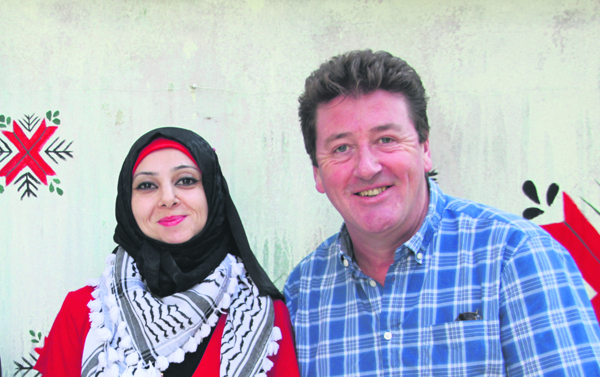 Tania Naboulsi with Eddie in Lebanon

BONE man Eddie Whyte is an elected national officer in Fagforbundet, Norway’s largest trade union, and is active on Palestinian and human rights issues. He’s just back from a trip to meet some refugees.

“Have been to Nablus yet?” she asked. “I myself am from there but I have never been. One day, I will go there, Inshallah.” Tania Naboulsi is a 30-year-old voluntary youth worker in the Beddawi Camp for Palestinian refugees in Tripoli, the second largest city in Lebanon. Nablus is just a few hours drive away in the Israeli-occupied West Bank in Palestine.

The devotion of younger Palestinians and their sense of belonging to towns, villages and indeed a country they have never been to, is perhaps the strongest trait of the Palestinian national character. It is similar in a way to the pride we find in the worldwide Irish Diaspora towards our own homeland, although the Palestinian experience is more distinctive – no other occupied nation in the world has been let down so badly by the international community.

The ethnic cleansing of Palestine in 1948 and the Israeli war of attrition in 1967 has resulted in over five million Palestinian refugees, many of whom live enclosed in cramped refugee camps in Syria, Jordan, Lebanon and occupied Palestine. A staggering seven decades after being forced off their land, they are still confined and in exile with no solution in sight. As the world looks on in cold indifference, the Israeli government continues to deny displaced Palestinians the right to return to their home towns that was originally enshrined in the United Nations General Assembly Resolution 194. The resolution has never been acted upon, much to the shame of the United Nations and the international community that approved it.

The Beddawi camp sprang up around the port of Tripoli in 1955, a few years after the first major wave of ethnic cleansing of Palestinians that led to the foundation of the state of Israel. It is one of 12 camps in Lebanon alone where almost half a million Palestinians live in dire conditions and without basic human rights. Palestinian refugees, even those who are born in Lebanon, have no voting rights, no right to own property and are prohibited from employment in many areas – even if they are qualified for the positions available – and no right to Lebanese citizenship. With the return home to Palestine being barred by Israeli aggression, the possible integration into the host society is made unworkable by the enforced restrictions that discriminate against them in Lebanon. Several generations after being forced to flee their homes they are still in exile and future prospects look bleak without a major international intervention.

I was visiting the Beddawi camp as part of a delegation from Fagforbundet –the largest trade union in Norway with more than 355,000 members – and Norwegian People’s Aid, the labour movement’s humanitarian aid organisation. Solidarity work – both national and international – is an important part of Norwegian trade union policy. A few years back, our union established an Ambassador Corps for Palestine consisting of elected union representatives from all of Norway’s 19 counties. The Corps visits Palestine and the Palestinian refugee camps regularly and works on raising awareness on human rights, the illegal Israeli occupation and humanitarian issues. Our members fund projects that work on a daily basis to strengthen Palestinian society and its ability to resist the occupation.

Tania Naboulsi is an integral part of one of those projects and represents the new generation of Palestinians intent on generating hope in the most difficult of circumstances. She is an ardent member of the youth group in the Beddawi camp, the Palestinian Arabic Cultural Club (PACC), and uses her wall art to promote Palestinian unity.

“Art has always been used in the struggle for the Palestinian cause”, she says. “Tamam Al-Akhal would use the hairs of her head to paint because she had no money to buy brushes. Creative art gives us the opportunity to portray our Palestine – the people, the land, the trees and the seas. It is in our soul and our blood. Palestine is everything to us.”

She is intelligent, articulate and clearly has a burning love for her people and her country.

The PACC currently organises youth projects in three camps and aims to expand to all twelve in Lebanon. They believe in the empowerment of youth and are working for a caring society based on equality, regularly collecting and distributing food for people struggling to make ends meet. They coordinate training courses for young people, making them aware of their rights and challenging the camp’s bureaucratic steering committees to think anew – they want more youth representation and more women on the committees. In a situation dominated by a history of hopelessness, it is not difficult to feel inspired by their vision of the new world. When asked about her own personal vision of the future, Tania replies straightaway that she would like to be a better artist but, more than that, a better person. She has a disability as a result of a childhood illness and poor medical treatment that led to one leg being shorter than the other. She is determined that it will not hinder her work.

“My main focus is for the world to recognise Palestinian rights. Our work gives our young people hope and that is something everyone needs given the conditions here in Lebanon. Everything we do is for Palestine and its people. God willing, I will also soon be able to climb more scaffolds and paint more murals. I want to be an example to our young Palestinians. We must never give up the struggle. I want people to look beyond my disability and see me as Tania the artist.”

Her appeal to the world community is straightforward and full of expectancy. “If you believe in human rights, and especially the rights of women and children, then you need to take a stand for us Palestinians. Please open your eyes to the truth and what is really happening in Palestine. Look at who is being oppressed and who is doing the oppressing. Help our people to get their rights. The right to return needs to be more than just words on paper and it has to happen – sooner rather than later. One day we will all go home to Palestine. Everyone will go to his village or city. I'm going first to my mother’s and grandmother’s village, Tantoura in Haifa, and after that to Nablus – my city.”