DÚLRA: Jackdaw down but help is at hand in the winter garden 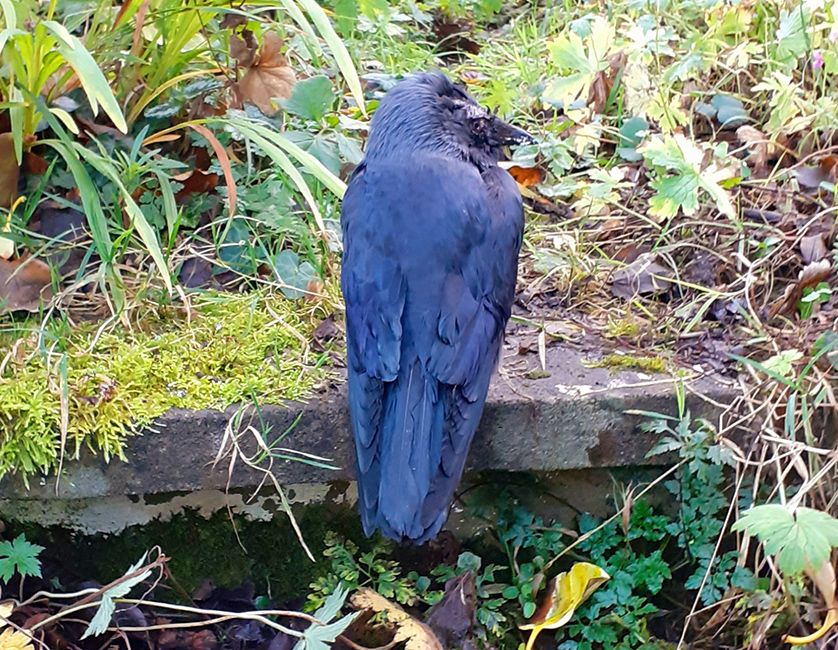 THIS is Dúlra’s new lockdown pal – a jackdaw that’s hopping around the garden unable to fly.

There didn’t seem to be anything wrong with its wings, but as you can see in the picture there is some damage to the top of its beak as if it had crashed into something. Although windows are treacherous for so many birds, Dúlra doesn't think that's how it got injured.

Jackdaws rarely fly that low around here – they’re only seen twice a day disappearing high over the roof as they make the dawn and dusk commute from mountain to city. Maybe it hit an overhead line or branch and came crashing down into Dúlra’s garden.

And to be honest, despite Dúlra’s best efforts, its life is still on the line.

Even the slightest injury can prove fatal for birds. There are no bird hospitals, no A&E, not even a place to recuperate and take a little time out when they are feeling low. They have to keep themselves in permanent pristine condition – even a lost feather can punch a hole in their body armour and let in the deadly winter chill. Their world is a ruthless one.

But this jackdaw isn’t alone.

It’s not just Dúlra who helps by scattering breadcrumbs for it every morning. Incredibly, its partner refuses to abandon it.

Jackdaws have among the strongest mating bonds, which can even survive years of failed breeding.

And this injured bird’s partner is never far away.

It sits on the branches above keeping a watchful eye, encouraging the grounded bird to take to the skies once more. Jackdaws are called cág in Irish after its call – and the watching bird certainly does plenty of cágging.

As any hospital patient knows, visitors play a vital role in keeping spirits up. And so the stricken jackdaw’s partner has put its own life on hold to offer encouragement and maybe also some protection if a hawk or cat comes along.

Crows have been known to care for family members over long periods of time, even when they are permanently disabled.

Four Crows, I wonder which you like best? Jay, Rook, Jackdaw and Carrion Crow pic.twitter.com/w6CEnxURl9

Ultimately, Dúlra fears this drama will not play out well. He has tended to many injured birds in the past – blackbirds with broken wings, finches stunned by a windowpane – but never a crow.

If he caught it and put it in, say, a cardboard box where it would be safe, would it eat and drink as it does in the garden?

The truth is that the stress involved in catching could well terrify it so much that it would refuse food. Crows, in particular, don’t take well to captivity unless they’re caught when they’re young.

But jackdaws aren’t like other crows. Magpies are jumpy, rooks are cautious, hooded crows like their own company. The smallest of them all could well be the smartest – in Italy jackdaws have been trained to steal money from cash machines.

Best of all, it’s known that jackdaws are unique among birds because they can recognise one person's face from another's. Studies have shown that they make different calls depending on who is approaching – if it’s someone who they are familiar with, the call will be friendly. If it’s someone who has done them harm in the past, they make a warning call.

Maybe, if it survives, this jackdaw and its mate will forever recognise Dúlra as a friend in their time of greatest need.

* If you’ve seen or photographed anything interesting, or have any nature questions, you can text Dúlra on 07801 414804. Reader Alan Kenny spotted a red kite above Springbank in Poleglass this week. The spectacular bird of prey that was driven to extinction in Ireland before being reintroduced in County Down a decade ago seems to be spreading its wings, literally.

“It was above Springbank for about 10 minutes and after a while seagulls noticed it and began to mob it, so it headed towards Hannahstown. I’m used to seeing buzzards and sparrowhawks around here but that was my first red kit,” he said.

Red kites are the nearest we have to vultures and are easily differentiated from buzzards by their forked tail.