Inside the cannabis factory 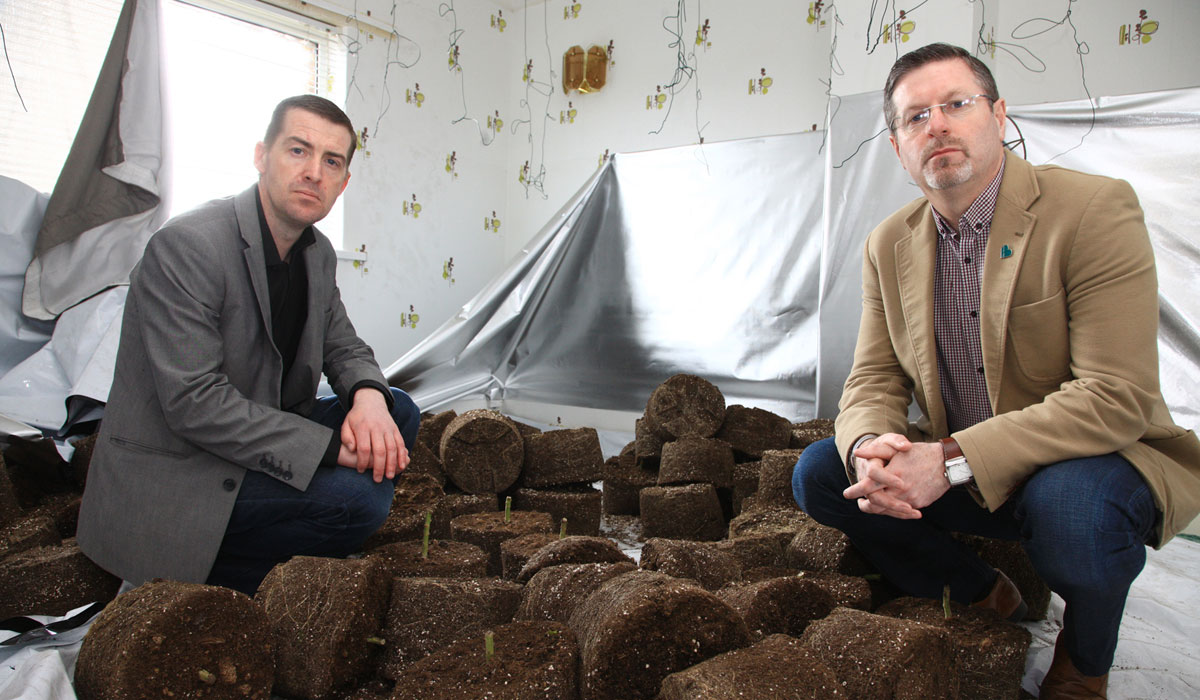 THE astonishing lengths to which criminals are going to cultivate cannabis were laid bare this week when the Andersonstown News was taken on a tour of local home from which police recovered a huge amount of plants.

Approximately 400 cannabis plants and massive amounts of drug-growing paraphernalia were found at the property in Willowvale Gardens on Sunday night after the PSNI had been called to the premises by the landlord.

The owner of the property, who asked not to be named, told the Andersonstown News that he had been renting out the semi-detached property  since January and had become suspicious when the inhabitants failed to pay the rent for April.

A huge amount of damage has been caused to the house and now the owner faces a repair bill running into many thousands of pounds. No longer recognisable as a family home, the property has been fitted out with heaters, fans and reflective panels. An intricate suspension system designed to hold the plants vertical has been rigged to the ceilings. Large holes have been cut in the walls and ceilings to accommodate vents and pipes.

“The first thing I want to say is that these people should be caught and put in prison,” the landlord told us. “They are just animals to me – this is sub-human what they have done to my family home. They had the cheek to ask me to decorate the house before they moved in and look what they have done.

“I couldn’t believe it when I went to the house on Sunday. I couldn’t put my key in the lock as it had been changed – they even put in their own lock. I had to take out the back window to get in. What greeted me was nothing short of horrendous.

“The entire house was blacked out with curtains, there was tin foil in every room, the doors had been taken off their hinges and there were heaters, cooling fans and humidifiers everywhere. Carpets had been ripped up and cable ties were hanging from the ceilings where the cannabis plants were growing – it was disgusting to see.

“The bath was full of brown scummy water which I assume they were watering the plants in. There must have been a hundred in every room and the smoke alarms were all removed as well.”

Visibly upset, the owner of the house told the Andersonstown News that he believes no-one was actually living in the property. “It’s uninhabitable. You couldn’t expect anyone to live in it.”

And the landlord explained how the house was rented.

“I met with three Chinese people at the beginning of January. I met a woman and two men and they were all in their early 30s. They were very well dressed and on good faith I agreed to let them rent the house – and they turned it into a drugs factory. They moved in on January 9 and then the next couple of months rent was paid to me through a bank account so I never thought anything of it. They’ve now disappeared.

“I wanted to contact the Andersonstown News to warn other landlords to be on their guard. This house has been in my family for 47 years and now it’s been destroyed. You just don’t expect to see something like this in the middle of Andersonstown.”

Speaking to the Andersonstown News at the property, local Sinn Féin Councillor Matt Garrett welcomed the fact the drugs were “off our streets”.

“I was shocked to see how this family home that had been rented out in good faith was destroyed and remodelled to accommodate this drug operation. Willowvale is a quiet residential area and it is quite shocking that this has gone on without anyone knowing about it. What has happened here is a big concern for us and landlords need to be conscious of who they are letting out their properties to and use a professional agency,” he added.

Director of the Falls Community Council, Gerry McConville, said: “I would like to congratulate the landlord who acted absolutely correctly and responsibly by contacting the PSNI. However, as we see the rise in rental properties, I would caution local landlords to be careful who they rent to and to insist on regularly inspecting their property.”

A spokesperson for the PSNI said: “Police are continuing to investigate the discovery of a cannabis factory in West Belfast. We have appealed to the community to report anything suspicious to us on 0845 600 8000.”