GERRY ADAMS: Internment greeted with the screams of children 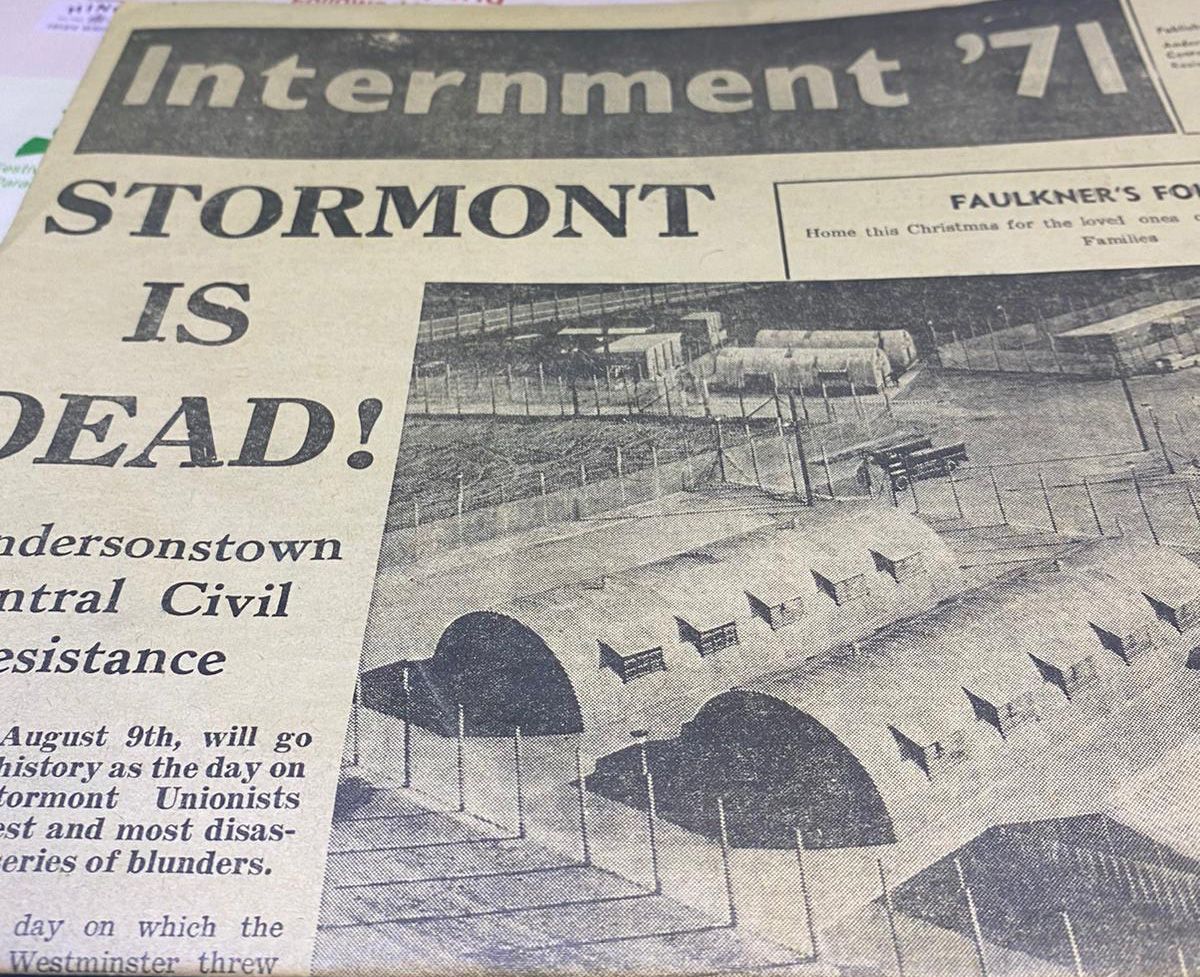 Imagine lying in your bed as the sun begins to rise above the horizon. You are   awakened by loud banging on your front door. The sound of breaking glass and the splitting of wood as the door finally surrenders to the sledgehammer. Sitting up half asleep as the noise of booted feet come charging up your stairs and your bedroom door is kicked in. The screams of your children, or wife or partner or your parents, as uniformed soldiers in blackened faces grab you and drag you from your bed, demand your name, and haul you out of the bedroom. Baton blows rain down on you.

Heaved down the stairs to the street outside where you are roughly thrown into the back of an armoured vehicle and forced to lie on the floor. Shouted abuse and threats in English accents ringing in your ears. Fists and boots hammering against your head and body. Rifle butts and batons thumping into you. The noise and clatter of metal doors being opened and closed. The smell of diesel. Of people screaming in the street. Of not knowing what is happening, where you are going or what has happened to the family you have just been yanked from.

Last Monday, exactly 50 years to the day – August 9, 1971 – hundreds of families in nationalist areas across the North suffered that terror. Thousands of British soldiers smashed their way into homes, dragging men and boys, old and young, from their beds and their terrified families to holding centres where most were beaten. 14 men were hooded and subjected over a week to brutal in-depth interrogation techniques by the RUC and the British Ministry of Defence’s Joint Services Interrogation Wing (JSIW).

Internment, or Operation Demetrius as it was named by the Brits, was an act of mass political violence and intimidation directed by the unionist regime and Downing Street, against nationalist and civil rights activists. It led to fierce rioting with British forces and the erection of barricades around most nationalist areas of Belfast and Derry. 14 people were killed on that first day. Five of them were among the 10 who were to die over a 36-hour period, shot by the Paras during the Ballymurphy Massacre. It took 50 years for their families to break through the lies and propaganda and secure truth about the events of August 1971 through an inquest.

Thousands of families became refugees in their own country, fleeing their homes from violence and intimidation. Most of those from Belfast ended up in a refugee camp in Gormanston, Co Meath, run by the Irish Army. Refugees from Derry and Tyrone made their way to Finner Camp in Donegal. Some of these eventually ended up in camps in Coolmoney, County Wicklow, Kilworth in Cork, and in Galway. Within a week the Irish Times was quoting An Taoiseach Jack Lynch warning that their reception centres for refugees had “almost reached saturation point".

More than 5,000 refugees, mostly women and children, had fled the North and were now in camps in the South. According to a report by Freya McClements in the Irish Times last weekendm there were 601 refugees “in the Garda training college at Templemore, Co Tipperary, Dublin Corporation housed 1,250 in hospitals, schools and convents, and about 100 refugees from Derry were sent to the Ursuline Convent in Sligo.”

Generations
The people who were lifted came from several different generations. Liam Mulholland was seventy-eight, one of about fifty older men like who were lifted simply because they had been interned before. Then there were young student members of People’s Democracy and a few members of the Civil Rights Association. Some people were perhaps picked up because they were related to political activists; others, completely uninvolved people, were just in the wrong place at the wrong time. There were local community and tenants’ association activists, and there were republicans, but despite the fact that the first killings had been carried out by loyalists, that the first explosions were the responsibility of the UVF, and the first RUC man had been killed by unionists, no unionists were interned.

Violence escalated. Scores more died. In December 1971 McGurk's pub in North Belfast was bombed and 15 nationalists were killed. The RUC tried to blame the IRA, but it was unionist paramilitaries acting in collusion with British forces. The Parachute Regiment, the shock troops of the British Army, who had killed so many in Ballymurphy, were sent into Derry on January 30, 1972, and killed 14 civil rights marchers on Bloody Sunday. Weeks later the Stormont Parliament and Regime was gone – never to return.

But the street protests and marches against internment continued and eventually morphed into protests in support of the political prisoners in the H-Blocks and Armagh Women’s prison. Decades more conflict followed.

One additional consequence of the chaos and conflict in the aftermath of internment was the publication in November 1972 of an eight page local newspaper published by the Andersonstown Central Civil Resistance Committee. The new paper’s focus was on telling the truth and lifting the lid on the actions of the British state that were being largely ignored, censored or excused by most of the mainstream media. The Andersonstown News has played a central and continuing role ever since.

Thanks to Alex and Liz Maskey

ALEX Maskey will not be running in the Assembly elections next May. It will be the first time since winning Sinn Féin’s first Belfast Council seat in 1983 that he will not be an elected representative. I have known Alex since the 1970s. He is first and foremost a republican activist. He is committed to the goal of Irish Unity and of a republic based on the 1916 Proclamation. I am confident that he will continue to be an activist and to work for the principles and objectives he has dedicated his life of activism to.

Of course, it is impossible to think of Alex and not think also of Liz. She has been by his side through all of these years. She is an activist in her own right. This week as we recall the introduction of internment 50 years ago, it is important to remember that Liz was the first woman interned. Alex was also interned and they married after their release.

When Alex was first elected in June 1983 as a Belfast City Councillor, the unionists refused to talk to him. They tried to shout him down, sounded horns, blew rape whistles and threatened him.

As an elected official Alex continued to be constantly stopped, delayed, detained, searched and verbally and physically, abused. Sometimes the British Army was involved. Most times it was the old RUC. When the Stevens Inquiry into collusion concluded its findings, it found that Alex was targeted by the notorious Brian Nelson.

During their decades of activism, the Maskey home was frequently the target of attacks by the RUC, British Army and unionist death squads. Alex was grievously wounded in one such attack in 1987 and on another occasion, in May 1993, his friend Alan Lundy was shot dead in Alex’s living room by a UDA gang. Undaunted by all of this, Alex went on to become the first-ever Sinn Féin Mayor and only the second Catholic at that time to hold that post in the entire history of our fair city. Perhaps it was his love of boxing and the 71 out of 75 fights he won as a school boy boxer that gave him the courage and tenacity to face up to the challenges of being a republican leader during desperately hard times. Most likely it’s because he is a natural leader, who is prepared to stand up to injustice and oppression, regardless of the efforts of others to terrorise or intimidate or beat him into submission.

Alex demonstrated his strength of character in more recent times as the Ceann Comhairle – Speaker – of the Assembly. He was fair, even when dealing with those who wanted to play the old sectarian politics.

So, Alex is standing down from elected office, but I am sure he will continue to inspire and lead us as we  continue to make progress toward achieving and winning the unity referendum. In the meantime we wish him and Liz good luck. And we thank them.

READERS who have been following my struggle with Russell the renegade rooster will be pleased to know that that stressful period in my life has come to an end. Daddy Dognapper was not helpful whatsoever. After his initial burst of bravado he wilted in the face of Russell’s intimidating aggression. I can’t say I really blame him. Russell fowled him while he was using the outside toilet. I caught the end of that attack as Daddy Dognapper retreated backwards, hobbled by his trousers and under garments floundering around his ankles as he tried  to protect his Henry Halls while Russell lunged at him, and them.

Russell fled when I arrived with my hurling stick. So did Daddy Dognapper. I haven’t seen him since. It was the day after that that I caught Russell. I am not going to give you all the details of that grisly last encounter. My Ballymurphy childhood and our big game hunting expeditions on the Black Mountain and Divis stood me in good stead along with my camouflaged poncho. His death was an accident but I won’t dwell on that.

Suffice to say Russell’s goose is cooked. Vegans among you may object. Vegetarians also. Even pescatarians, including Free Pescatarians like RG. Though they have little room for complaint, given that they kill fish.

So Russell has cock-a-doodle-dooed for the last time. He was defiant to the end. How will I remember him?

He made the best coq au vin I ever tasted. Slán, Russell. Don’t mess with the best, because the best don’t mess.