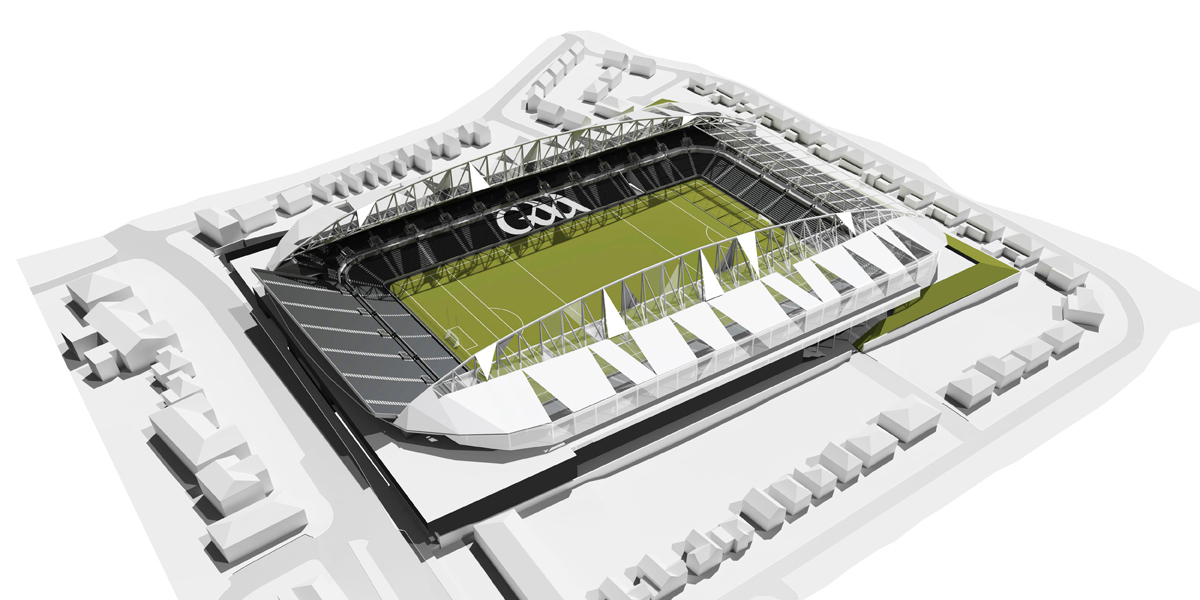 DRAMATIC designs for the Casement Park redevelopment were unveiled at Belfast City Hall on Wednesday evening, as the Ulster Council began its second phase of public consultation on the new stadium.

The artist’s impressions reveal for the first time the scale and ambition of the new stadium, which is due to be completed by June 2016.

The Ulster Council hope to have their plans for the new stadium submitted to the Planning Service by April 2013 and for work to begin on the site by the end of the year.

Before then, the general public are being encouraged to have their say on the proposed stadium in the heart of West Belfast.

Since April 2012 the GAA have been in regular consultation with residents in the Andersonstown area and with local businesses, and that consultation is now being rolled out to the wider community and groups with an interest in the stadium redevelopment.

This is to ensure that all views are heard before the formal planning application is submitted.

Stadium project board chairman Tom Daly hopes the new stadium will become a “social and economic driver for the city”, which could see the West Belfast economy benefit to the tune of £15 million per year.

"Since the middle of 2012 we have had an ongoing engagement with local residents and community groups which included meetings and two open consultation events,” said Tom.

“The input of the local community has been vital to our design team who have been able to adapt the design and our overall concept to ensure that the project complements and enhances the local environment.

“Our overall aim for Casement is twofold, firstly we want to achieve the strategic requirement set by the GAA in 2002 which will see us develop a fit for purpose Provincial Stadium and secondly we want the stadium to be a social and economic driver for Belfast and the entire Province.

“Once completed the new Casement Park will potentially attract significant GAA events which could be worth up to £15 million per year for the local economy, this is a significant vote of confidence in Belfast.

“The new development could potentially sustain over 1500 vital jobs in the construction sector during the building process and will create significant medium term employment opportunities. We have also taken account of important social clauses in the tendering process.

Ulster GAA President Aogan Ó Fearghail also encouraged those with an interest in the project to come forward to have their say.

“We are pleased that the project underlines Ulster GAA's continued commitment to enhancing the GAA in Ireland's Second City,” said Aogan.

“ This project will be a regeneration anchor for the entire City of Belfast and Ulster GAA is proud to be leading a process that will assist the regeneration of the economy.

“We strongly encourage feedback from all stakeholders and I look forward to the Stadium Board progressing the planning application once this phase of consultation is complete.”

The Consultation Process will last until the end of April 2013 when a community consultation report on the stadium will be published.

The plans for the Stadium Redevelopment will be on display at the various locations including Falls Leisure Centre, Andersonstown Leisure Centre, the Dairy Farm and Belfast City Hall.

or by visiting www.casementpark.ie  and completing the online questionnaire.

Four public events will be held over the course of March/April 2013 which will be publicly advertised with dates and locations in due course.

The new stadium is the biggest and most ambitious building project ever undertaken in West Belfast.

The new stadium will seat 40,000 people and will include restaurants and conference facilities, bringing sustainable jobs to the area.

The new ‘front’ of the stadium on the Andersonstown Road will be further back from the road than the current turnstile wall to allow for a public space in front of the stadium.

There will be a number of commercial units facing on to the Andersonstown Road, including a ticket office and an Ulster GAA merchandise shop.

The GAA will encourage visiting supporters to travel either by train to Balmoral Station or use one of the proposed park and ride schemes. The new design includes 240 parking spaces.

The stadium was originally envisaged as a ‘bowl’, with a roof on all sides, and with new floodlights contained within the bowl, but the latest plans show a large, exposed seated stand at the Andersonstown Road end.

It is thought this is to help the stadium empty swiftly after major matches, as all patrons will leave the stadium at the Andersonstown Road end. No supporters will enter or exit the stadium from either Owenvarragh Park or Mooreland Park.

Rainwater will be collected from the roof for use in the toilet system and for watering the pitch.

The Casement Park Project will cost approximately £76.4 million. DCAL is funding £61.4 million with the GAA investing £15 million in the project

Last week, Belfast City Council announced that they would be funding a new  21st century state-of-the-art leisure facility which will be a key component of the new Casement Park when it opens  in 2016.

Belfast City Council’s Policy Committee also announced that a similar leisure facility would be included in the redeveloped Windsor Park.