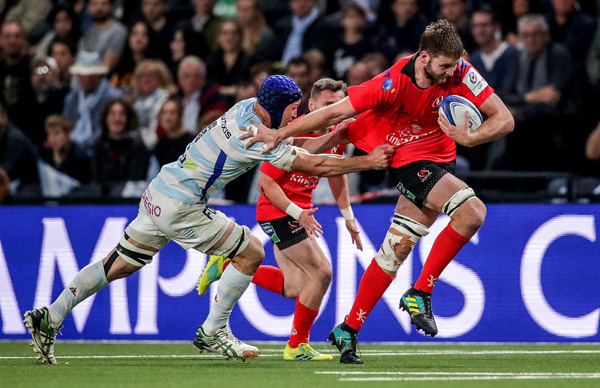 THE forthcoming Rugby World Cup will be a bittersweet one for many Ulster fans as it will mark the swansong of Rory Best’s glittering playing career.

Last week, it was confirmed that Iain Henderson will succeed him as Ulster captain for the forthcoming season.

Henderson will feature for Ireland alongside Best in Japan when the tournament gets underway in September and he says he is in no doubt about the enormity of the void Best’s departure will leave at the Kingspan.

“I’m incredibly proud – it was a great phone call to get from Dan (McFarland). I was delighted to come up and have a good chat with him,” said Henderson.

“I think we are both pretty aligned on where we want the club to go. There are exciting times ahead. Next season will be obviously be a massive challenge and, for myself, I’ve incredibly big boots to fill with Rory (Best) outgoing. I’m massively excited to experience it.

“Over the last number of years, I’ve gotten very close with Rory. In ways I’ve been, consciously or unconsciously, learning from what he does. He is obviously a phenomenal leader, on and off the pitch.

“Off the pitch is where I’ve probably learned the most from him. I’ve incredibly big shoes to fill and all I can do is put a massive effort towards that.”

Henderson has already captained Ulster for a handful of appearances when injury ruled Best of out action last season.
He feels the make-up of the squad will make captaining Ulster a bit easier as Henderson says the team has leadership in abundance.

“When I’ve captained Ulster for a handful of appearances in the past, I’ve found it easy enough in a way because of the amount of leaders around me,” added Henderson.

“The team has leaders peppered throughout and that’s something which makes the captain’s job a lot easier. Making decisions becomes a lot easier when you’ve a lot of people around you who understand what they are doing and are aligned with your thinking. Fingers crossed, it will continue to be like that.”

Last season, Ulster narrowly missed out on a place in the Champions Cup final after suffering a heart-breaking 22-18 defeat to Leinster at the Aviva Stadium.

A late Ross Byrne penalty sealed a three-point victory for Leinster, who went on to lose to Saracens in the decider, but the main talking point of the game was a missed try-scoring opportunity for Jacob Stockdale. The game also proved to be Best’s last in an Ulster jersey with an ankle injury ending his game after just 16 minutes. An understrength Ulster went on to suffer a heavy 50-20 loss to Glasgow in the Pro14 semi-finals.

However, Henderson is confident that an influx of young talent can help drive Ulster on to bigger and better things this season.

“For me, last season one of the most exciting things was seeing the hunger from the young lads, the new faces about,” said Henderson.

“Those young players last year got a taste of what play-off rugby was like. Obviously a couple of the games didn’t go the way we would have liked, but that’s just left them hungry for even more.

“Chatting with a few of the coaches, I think pre-season for the first few weeks has been absolutely brilliant. Everyone is working really hard and trying to put their best foot forward because they know there’ll be spots up for grabs towards the start of the season.

“If you play well in those games, it puts you in a strong position leading into Christmas time to get more caps. Again, that competition is vital for our squad and it is something last year that was brilliant to see - young guys vying for places, wanting to do better.”

Ulster will play Glasgow again in a pre-season friendly at the Kingspan Stadium on Saturday, September 7 before the new Pro14 season kick-off on Friday, September 27 when they host the Ospreys.

Ireland, meanwhile, begin their Rugby World Cup campaign on Sunday September 22 with a clash against Scotland in Yokohama while they also face the hosts Japan, Russia and Samoa in Pool A.