JUDE COLLINS: Jeffrey and Doug have their crocodile moment 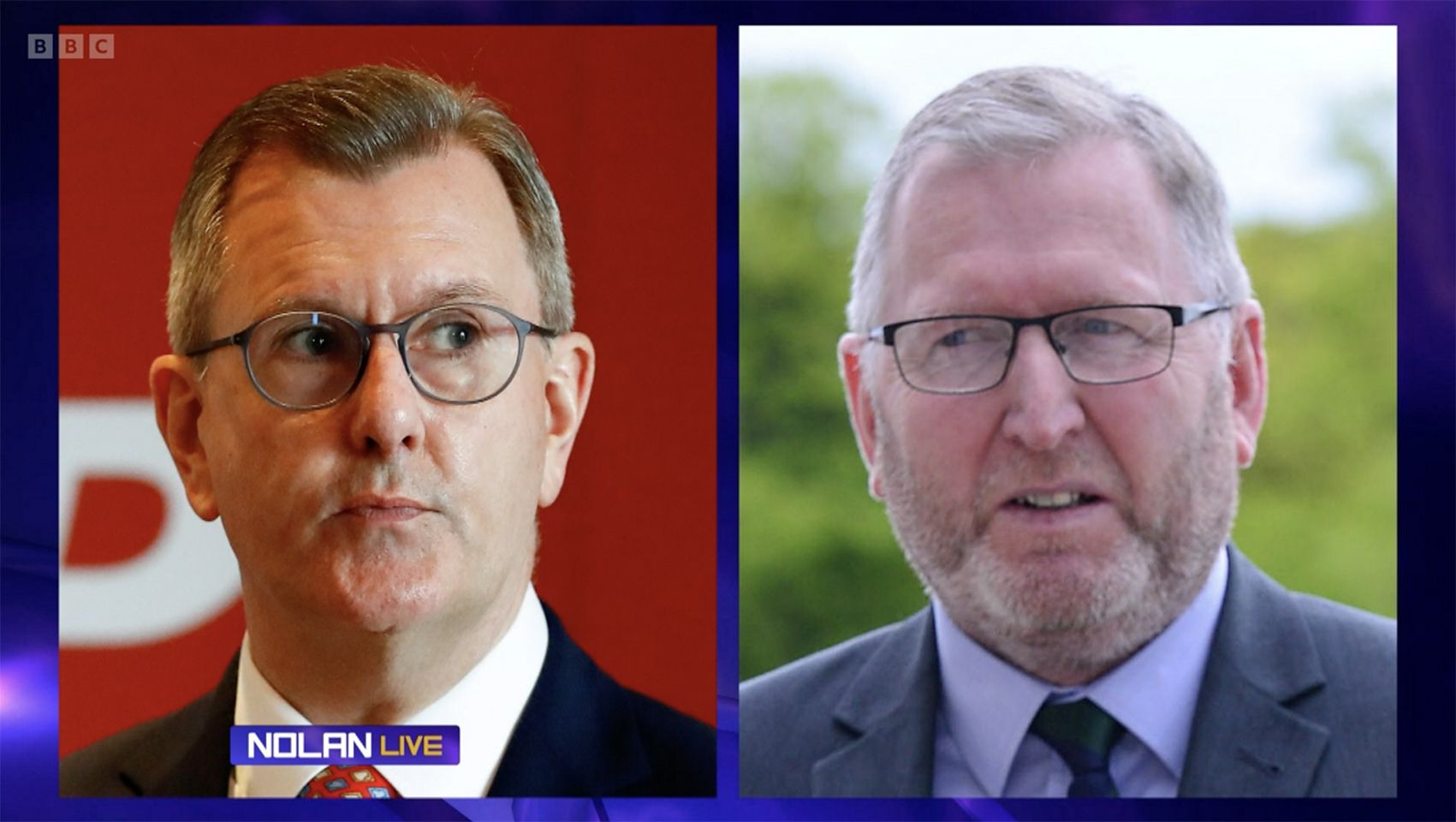 QUESTIONS: Stephen Nolan queried the failure of both DUP leader Jeffrey Donaldson and UUP leader Doug Beattie to say whether they would serve alongside a Sinn Féin First Minister if that’s what the May election produces; he put this image up on the screen

STEPHEN Nolan has been having a tough time recently.  Both the DUP and Sinn Féin, for their own reasons, are not participating in his various programmes as they once did, which seriously weakens him. Long-term, you simply can’t go on commenting on political matters in our little stateen and not have access to the two most popular political parties.

Will Sinn Féin continue to be one of the top two most popular after the May election? Probably. And the DUP?  Probably, although that party appears intent on wounding itself at every opportunity.

Certainly Nolan gave unionist politicians a roasting last week, particularly Jeffrey Donaldson and Doug Beattie. They weren’t present in the studio, so he put up two big head-and-shoulders photographs of both. And left them there for viewers to consider in silence.

He did this to highlight the silence of both parties on whether or not they would take the role of deputy First Minister, should the electorate vote that way. They wouldn’t say yes, they wouldn’t say no. And then Nolan used the C word. “Is this another crocodile moment?” Nolan wondered. “Or worse?”

Well, since you ask, Stephen, worse. Arlene Foster’s crocodile remark consigned her political opponents to the reptile kingdom, which really fired up nationalist voters who didn’t like it one bit. And so Arlene learned  the hard way that you can’t go around comparing your political opponents to predatory swamp creatures without triggering a backlash.

But this latest Jeffrey-Doug stance is more serious again. It gets to the heart of the matter in NEI: we’re no longer talking about insulting political opponents. This time we’re talking about attitudes to democracy.

I’m sure Jeffrey and Doug have all sorts of good reasons for the stand they’re taking (such as, they think it’ll win them votes).  But they would need to  consider the effect it’ll have on Sinn Féin voters. If the crocodile galvanised them last time, this time should leave them grim-jawed with rage. Because, as Nolan pointed out, Doug and Jeffrey are making it clear that their commitment to democracy is, um,  provisional. If democracy wins them the First Minister post, okay, fine, break out the bubbly. But if it doesn’t, and the Shinners are in line for First Minister, unionist commitment to democracy could well end, because democracy is supposed to leave the DUP in charge of things. If you can’t depend on democracy to make you top dog, what good is it?

No, let me correct that last sentence. The DUP and the UUP haven’t actually said they won’t agree to a Sinn Féin First Minister. It’s just that they haven’t said they will. Semantics? Uh-uh. This is  the two unionist parties refusing to give their unqualified support to democracy.
And no, Virginia, I’m not overstating the case -this is serious stuff. It’s the NEI version of Trumpism. If the election doesn’t deliver for them, then the election must have been rigged.

In the US, this provoked those insane scenes in the Capitol building.  Here in NEI,  the speech of Foreign Affairs Minister Simon Coveney was cut short last week by a hoax bomb. The message was clear: “You do what we tell you regarding that Protocol, or next time it may not be a hoax.”

Joe Biden and Boris Johnson assure us the Ukraine war is being fought between democracy and autocracy. Blood is being shed, tanks marshalled,  buildings flattened. The West, rightly or wrongly, believes that Putin cannot be allowed have his way with Ukraine, that it is worth human beings fighting and dying for the principle of democracy.

Not so here. Here, democracy is a maybe thing.  If they were more honest, Jeffrey and Doug would unfurl a huge banner and hang it across the Stormont main building declaring in block capitals what Charlie Haughey said so long ago: “THIS IS A FAILED STATE..”