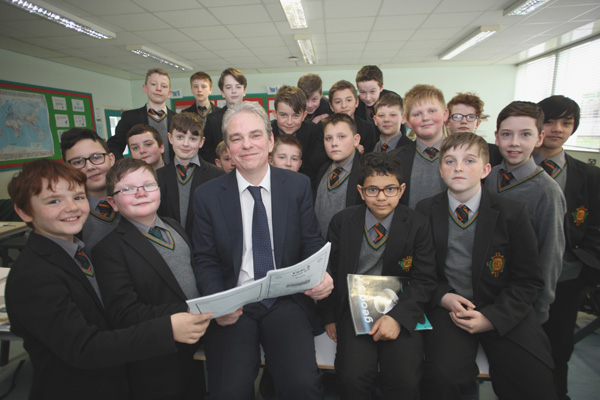 “I WILL certainly not be taking up golf,” laughs St Mary’s Christian Brothers’ Grammar School Principal John Martin as he prepares to retire from his role as head in October. “I’m a Mark Twain man – ‘a good walk ruined’ was his definition of golf. I do a lot of hill walking and expect I’ll be doing a lot more after Halloween.”
Having taught at the Glen Road post primary since 1999 and serving as Principal these past four years, John told Daily Belfast that while he has mixed feelings about his retirement, “The time has come, all things must pass, at the same time it’s been an absolute privilege and pleasure to do the job. Of course I will miss it, but it’s time.”
The 59-year-old, who started his teaching career at De La Salle College in 1985, spent ten years at the Edenmore Drive school before moving on to Downpatrick’s Further Education College and then arriving at St Mary’s as Head of History.
“I became a Senior Teacher and then Vice Principal in 2008 and in 2014 Principal,” explained John. “In the years that I have been teaching there have been dramatic changes in many ways, some of them quite negative in terms of less money now than there was 30 years ago. There are more and more financial pressures on all schools – we are no exception to that.
“Technology has changed dramatically throughout the years. When I was taught in St Thomas’ there wasn’t a computer, when I taught in La Salle you had the old-fashioned overhead projectors, the old-fashioned blackboards and chalk. Now it’s interactive white boards, Smart TVs. I doubt the students now would know what an overhead projector is, students are using their tablets, their own devices, it’s all very electronic now.”
John stressed the one thing that remains the same is “the commitment to the pupils – that has to be there.”
He continued: “I remember one child from when I was teaching in La Salle, he was very seriously injured and was in my form class. I remember working with his mother, with the child, through his recovery and seeing him progress and for me that was a real personal highlight.
“There are pupils from my very first form class with children of their own here in St Mary’s and seeing how well they have done is fantastic, there is real satisfaction in that.
“As Principal, a highlight for me, would be securing the future of the school, that St Mary’s remains as a standalone voluntary grammar school. Applications to the school have rocketed and we are sitting with record numbers.”
In a successful career from which he’s drawn immense satisfaction and pride, John admits the issue of infrastructure remains unresolved.
“I regret the fact that we are no further on towards a new school build. It’s been discussed on and off and to date nothing has happened. I know we are not the only post-primary school in Belfast who are waiting but this school was built in 1968. I do think for a school that employs 150 staff directly and educates 1200 pupils, overwhelmingly from this area – I think they deserve better in terms of a building.
“Our pupils get great value from our staff, but I think they deserve better in terms of their surroundings. This is a fabulous site, the site is so big, it’s got one of the best backdrops in the north, it’s a very safe site as it’s off the main road, you can do so much with it – that is the one regret,” he said.
“I don’t see any prospect of a new build in the near future but wish my successor well with it.
“St Mary’s like to be proactive, the 3G pitch we have was raised entirely from community funds. The wind turbine out the back was financed privately by the school, we don’t have the money to build a new school, but as I said the boys deserve one as they are the ones who make the school.”
After over three decades in teaching, John admits that he’s not sure what lies ahead when the home bell goes in the autumn.
“I’ve been involved in education over 30 years now and it will be rather strange when it comes to an end.
“There will be a sense of getting your day back, the day doesn’t end at 3.15pm for any teacher. It will take a bit of getting used to.
“I want to thank our Board of Governors, our Trustees, staff, parents and, of course, our pupils. If you’re not in it for the pupils there is no point being in the job at all, you get so much from the pupils. For the past three years I’ve taught the Year 8s study skills and careers. It’s 175 boys and it’s a chance for them to get to know me, I get to know them, and keep that connection going between yourself and the pupils. It’s a chance to help these 11-year-old boys settle into the school, you tell them that very quickly they will be going into Year 9 – ‘You’re veterans now.’ The time goes in the blink of an eye.”