JOSEPH JNR DIED NOT KNOWING THE TRUTH ABOUT DAD’S DEATH 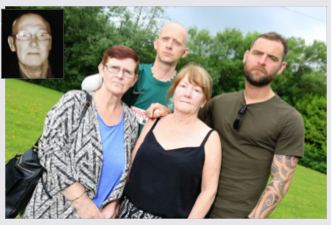 THE grief-stricken family of Ballymurphy Massacre eyewitness Joseph Corr Junior say they are more determined than ever to fight for the truth in his memory.
Known as ‘Wee Joe’, Mr Corr passed away on Friday past. He was the son of 43-year-old Joseph Corr Snr who was shot and wounded in Ballymurphy on August 11 1971 by the British army. Mr Corr Snr later died from his injuries on August 27.

66-year-old Mr Corr was laid to rest from his Downfine Gardens home following Requiem Mass at Holy Trinity Church on Monday. Speaking to the Andersons-town News, his son Neil said it was “disappointing” that their father died before the truth could be fully revealed to him of the circumstances of August 1971.
“It is disappointing as my brother Michael is the oldest brother and he made our dad a lot of promises, we all did, that we would get the truth before he went and now we are left to deal with it,” said Neil.
“If anything his passing has made us stronger, more determined to continue the campaign and our fight for truth. We’ve always been pushing the campaign and we will continue to do so,” he added.
Joseph Corr Jnr was with his father when he was shot in August 1971. Ironically, his sister Eileen McKeown spoke of how the family were “on a high” following a meeting back in January with the Lord Chief Justice in the Hilton Hotel.

“To be fair he didn’t give any promises he said he couldn’t keep. We came out dancing from that meeting and told Joe that in maybe five years we would get the answers – then the Executive put paid to that so that was very disheartening to him. But that just made us more determined to highlight the fact that he was sick.”
Eileen continued: “No-one wants to do that, no-one wants to have to contact the media and put their sick relatives in the paper but because the legacy issue wasn’t even put on the table at Stormont, that made us even more determined to highlight the fact that Joe was ill, and we needed this done as a matter of urgency.

“This case, our case needs to be heard. Joseph was one of the younger ones, one of the younger eye witnesses as he was only 21 at the time.”
Eileen spoke of how her brother suffered from survivor’s guilt.
“He was actually with my daddy and didn’t know it. He stepped over somebody who was lying on the ground to try and help someone else who was hurt. He discovered later that it was his daddy he had stepped over which then made him even worse,” she said.
“He had this thing in his head that if he had’ve let the other person go that he could’ve helped his father and he lived with that for 45 years,” she said.
“There wasn’t any help given at the time, there was no counselling. You were just left to get on with it. It was heartbreaking to watch him. The British government know the truth about Ballymurphy. They know it and they won’t give it over. Ballymurphy is really frightening to them. They were caught out during Bloody Sunday as the cameras were there. Ballymurphy was brushed under the carpet due to internment. Joe would’ve died a happier person if he had’ve gotten the truth about his daddy.

“That is the British government’s tactic, they want to hold off and hold off on main witnesses to basically let the main witnesses die off,” said Neil. “You can see it, it’s clear what they want to do, their attitude is eff it, they will die off, sure it’s only Ballymurphy in West Belfast.”
Joseph’s son Michael described his father “as one of the best”.
“He moulded us into the men we are today. And he never let us step out of line. He was always trying to help people. As his body was being brought out of the house the whole cul-de-sac was rammed packed with people who had turned out to pay their respects. I have never seen a cul-de-sac so packed since the funeral of Sean Savage in the ’80s.

“Our family’s fight is a generational one as the grandchildren will take over from us and the next generation after that.”
Echoing those sentiments Neil said his father was a “strong man.”
“He never complained but never spoke about what happened as it would’ve taken us to ask him about it. At the end of the day there is only so much you can take in. I know we will get answers down the line. Look at Hillsborough, they did it to their own ones.
“They prolonged it and prolonged it but the truth came out there.”
“Prime Ministers will come and go, so will Secretaries of States.
“We are taking another four or five years down the line until Cameron and Villiers are not there anymore.

“Sinn Féin locally, are very good and have been in the campaign – but they could be more hands on, more useful than what they are up on the hill. It looks like they are being told what to do and are going along with it.
“I remember watching the TV coverage from the Guildhall in Derry during the Bloody Sunday verdict, seeing the relief, the celebration, the hugs and tears from the families that day. That was something that I wanted to share with my daddy but I can’t do that now. Our celebration will be at the grave.”