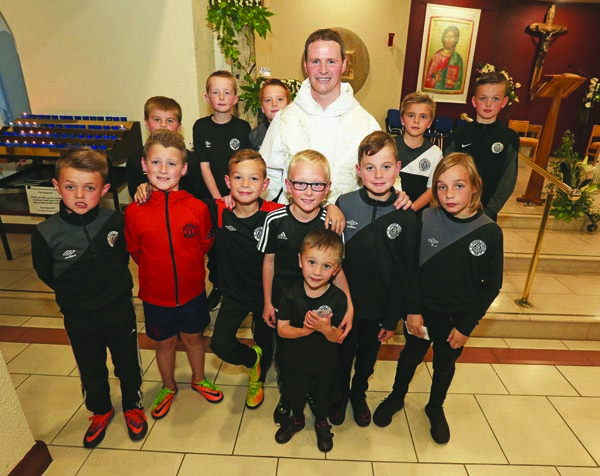 A FORMER Manchester United footballer from West Belfast who was ordained a priest at the weekend took part in his first mass.

Father Philip Mulryne was ordained on Saturday by Archbishop Augustine Di Noia, O.P., who travelled from Rome for the occasion, in St Saviour’s Church in Dublin.

The 39-year-old returned to celebrate a special Mass at his home church of St Oliver Plunkett Church in Lenadoon on Monday evening. Friends, family, and members of the Dominican Order, to which he belongs, joined him at the service.

He began his unusual career path as youth team starlet with Manchester United in 1994. He became a Northern Ireland international but never won a regular first team place. His only league appearance for United came on the last day of the 1997-1998 season.

Philip joined Norwich City in 1999 and laterCardiff City in 2005. After leaving Cardiff in 2007, he went on to sign for Leyton Orient and eventually retired at Kings Lynn in 2008.

After entering the Diocesan Seminary of Saint Malachy’s, he spent two years studying philosophy at Queen's University in Belfast and at the Maryvale Institute before going to the Pontifical Irish College in Rome to study theology for one year at the Gregorian University.

During Monday night’s Mass Fr Mulryne said that his ordination marked a “new chapter” in his life.