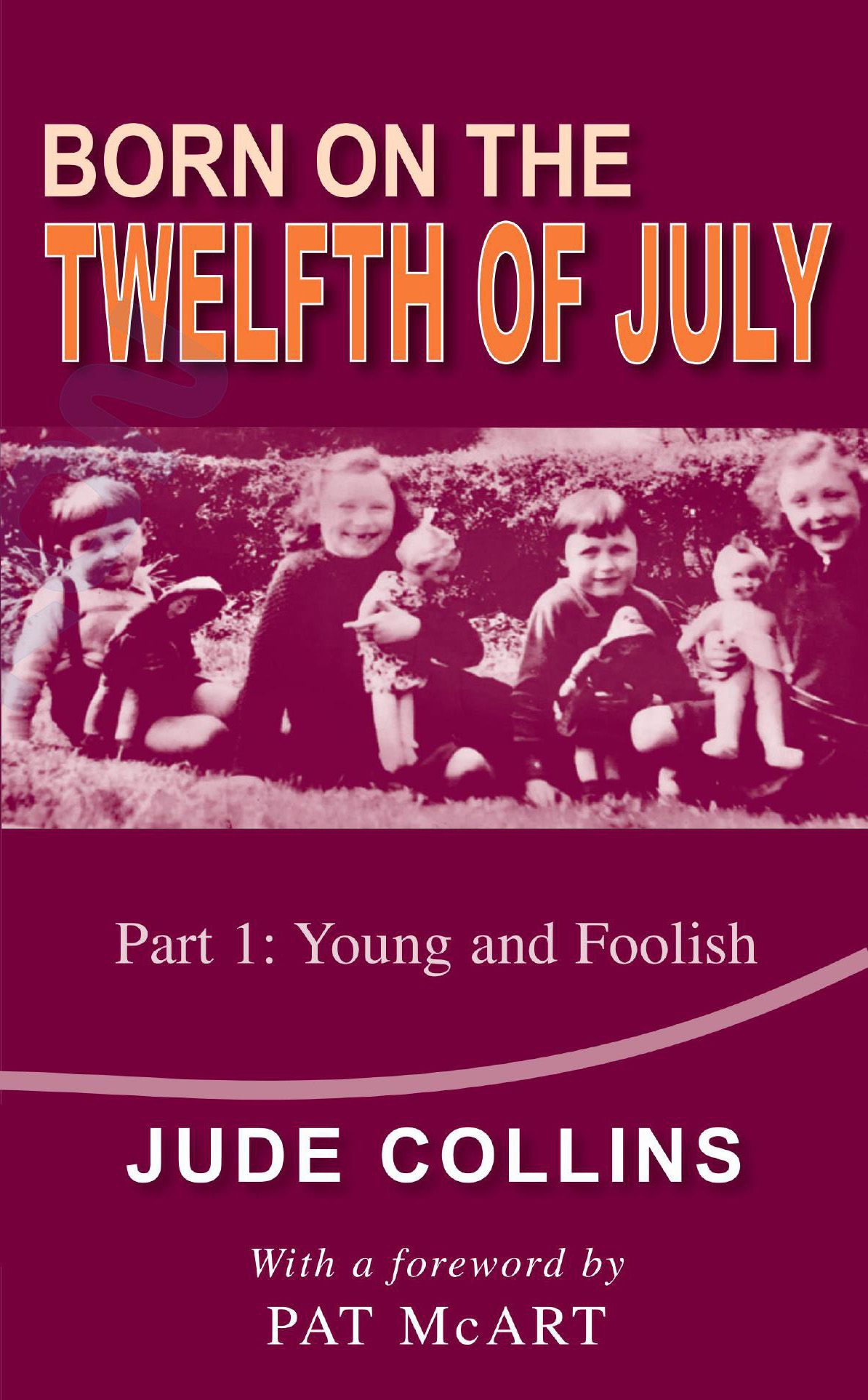 ‘Born on the Twelfth of July: Part One – Young and Foolish’ – by Jude Collins

“THIS is my tenth book,” Jude Collins says. “Or maybe the eleventh. I never was very good at Maths”.

His other books have consisted of novels, short stories and collections of interviews which focus on a given topic. For example, ‘Tales Out of School’ was a series of interviews with former classmates in St Columb’s College in 1950s Derry; and ‘Martin McGuinness: The Man I Knew’ gathered the memories of a range of people who knew the late Deputy First Minister during his life.

But with ‘Born on the Twelfth of July, Part 1: Young and Foolish’, Jude  turns the spotlight on himself, in his early years. We get a frank and often funny account of his childhood on a farm a mile outside Omagh, followed by six years in Derry as a boarder in St Columb’s and two years in Maynooth training for the priesthood.

“I suppose we all want to give an account of our lives – maybe justify what we did and what happened to us.  Willie Nelson has a song which starts with ‘ I got a long list of real good reasons/For all the things I done’. I’m a bit that way: I feel the need to gather and try to understand what I did and what happened to me in the first two decades of my life”.

As the youngest of eight children, was he reared in a boisterous, warm environment? Well, sort of.

“There was a gap of three and more years between me and the next three family members. They were girls and were naturally interested in girlish things much of the time. The result was that I had in some ways a solitary childhood.”

He attended Omagh Christian Brothers primary school for five years, at the tail-end of the 1940s and into the early 1950s. What did he learn from that time?

“That the person doing the teaching makes all the difference. It’s fashionable these days to denounce the Christian Brothers, tell tales of their brutality. And yes, not all the Brothers were model teachers – some could be unfeeling and heavy-handed. But others were kind and sometimes gifted.  Yes, I got the occasional thumping, but that was the way education was seen then. For the most part I did my homework and  emerged intact. There was more chance of violence at the hands of other boys in the school yard than from the Christian Brothers in the classroom.”

On the home front, the farm on which Jude grew up was bordered by a prefab council estate which was 100 per cent Protestant.

“Most of the time religious difference didn’t matter, but there were friction points.  Where our lane joined the Derry Road there was a bus-stop. There’d be a group of Protestant kids waiting at the stop to catch the bus to their  school each morning. Joining them as the sole Catholic could sometimes be, let’s say, tricky.”

“And of course every year there was the Twelfth – my birthday. Inevitably, it produced a rupture between us and our Protestant playmates. In fact, much of the Twelfth was spent exchanging insults and stones – yes, stones! These were the same Protestant kids with whom we happily played during the rest of the year.

“The way it worked was, a day or two before the Twelfth the Watson Park youngsters would have stopped crossing the fence to play with us, and a couple of days after the Twelfth they’d have returned, a little sheepish, and normal relations would be resumed. But the Twelfth celebrations always managed to temporarily rupture our friendships.”

Another and more lasting line of division arrived with  the Eleven Plus examination.

“I  spent a couple of heart-broken hours believing I’d failed the exam, only to learn later that same day that I had passed, and I was sent off to be a boarder in  St Columb’s College in Derry. Suddenly, from being a solitary child roaming our fields, I was plunged into a world brimming with noisy boys.

“My brother Michael was Head Prefect the year before I arrived at St Columb’s, and Seamus Heaney was Head Prefect during my second year in the College.”
Had he much interaction with the future Nobel Prize winner?

Jude laughs. “Not a lot. But there was one occasion which, what will I say, made an impact on me. . . No, no,  you’ll have to read the book to find out what kind of impact it was!”

After six years in St Columb’s, Jude followed his brothers’ example and went to Maynooth to study for the priesthood. After two years, he left.

“At which point my memoir of early years ends – when I’m twenty years of age.  Yes, I am hoping there’ll be a ‘Born on the Twelfth of July: Part 2’. Since I’ve subtitled this book ‘Part 1: Young and Foolish’, maybe I’ll call Part 2  ‘Older and stupider’!”

He leans back and wags his finger. “Don’t believe people who  tell you that age brings wisdom. That’s just old people talking, robbed of their youth and wanting to believe they’ve got very wise by way of compensation. Don’t believe a word of it!”

‘Born on the Twelfth of July: Part1: Young and Foolish’ will be launched in Belfast Central Library Royal Avenue  on Saturday 3 December at 2:00 pm. All are welcome. Signed copies of Jude’s memoir will be available for sale. Cash or card accepted.