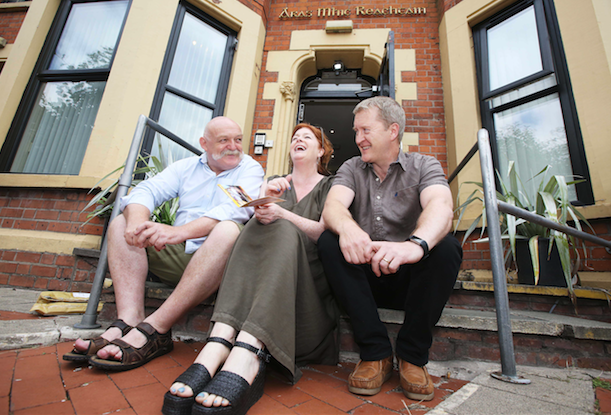 IT was standing room at Áras Mhic Reachtain on Monday for the official launch of the McCracken Cultural Society (Cumannn Cultúrtha Mhic Reachtain) summer school.
Now in its 19th year, the summer school attracts a fantastic array of musicians and entertainers for a weeklong celebration of the Irish language and culture, and this year is no exception. As well as an exceptional display of arts, there were up to 270 enthusiastic pupils who signed up to the summer school’s Irish language classes, which run daily throughout the week in the north of the city. The festivities began in earnest on Sunday with a guided walking tour of Cavehill and will be brought to a close by Irish traditional music stars Danú on Sunday (July 29).
The summer school was officially launched by RTÉ star Bláthnaid Ní Chofaigh, who hails from the Gaeltacht of Ráth Cairn. Speaking to the North Belfast News, Bláthnaid said that the summer school creates important links with Irish language speakers and enthusiasts throughout the country.
“It’s great and it’s an unusual one for me in a sense because when I was I kid you went to Belfast for funerals and a bit of cheap shopping – that’s the truth,” she said.
“In my late teens I started to go to Belfast in a social way.
“I think in some ways we have all been robbed of knowing each other, and that’s one of the greatest sacrifices that have been made.
“If you’re not in a certain circle of social activity around the Irish language then, often, you won’t know people from Belfast or other areas that speak Irish. We need to work on that, but in saying that I think there is a huge connection, more than ever, with people in other parts of the country. I never thought I would be asked here to open a festival – it’s fantastic.”
She continued: “The smaller communities rely on each other more than the bigger Gaeltacht communities. Because we’re so peppered out across the country, like Ráth Cairn or Belfast, we need to start making better connections with them and even with people that aren’t in Gaeltacht areas.
“When we say ‘muintir na Gaeltachta’ we probably need to change that completely, and have a generic term for all of us who speak Irish, whether we live in a Gaeltacht or not.”
She added: “I always feel very welcome here. I also feel that people here are realists about the language. I think it’s something that they don’t take for granted, but there’s always a feeling that things could be so much better and I love that.”
While the summer school runs for a week each summer, Cumann Cultúrtha Mhic Reachtain host events and classes throughout the year, and they can now count Bláthnaid as one of its members. Cumann member, and Maynooth University Professor, Fionntan de Brún, said that the survival of the summer school “depends on the support” of the community.
“It’s incredible that this is the nineteenth such occasion,” he said. “However, money is needed to organise something like this. During the year we had Bill Wolsey in, who owns the Merchant Hotel, he is a real business genius, and he couldn’t believe what we are charging for the summer school. But this isn’t a money making venture and this isn’t a business initiative. Unfortunately, some funders tend to think that things need to be organised according to a business model.
“This isn’t a business – it’s something much greater than that. It’s about putting something back into the community. For that reason, we can’t operate like a business.”
He continued: “This is the biggest annual Irish language event in the second biggest city in Ireland and it has been going for 19 years. I think our probation was passed a long time ago, so I think the funders could step up to the plate.”
To join Cumann Cúlturtha Mhic Reachtain or for more information call 0280 9074 9688, or visit their website at mhicreachtain.com 028 9074 9688.