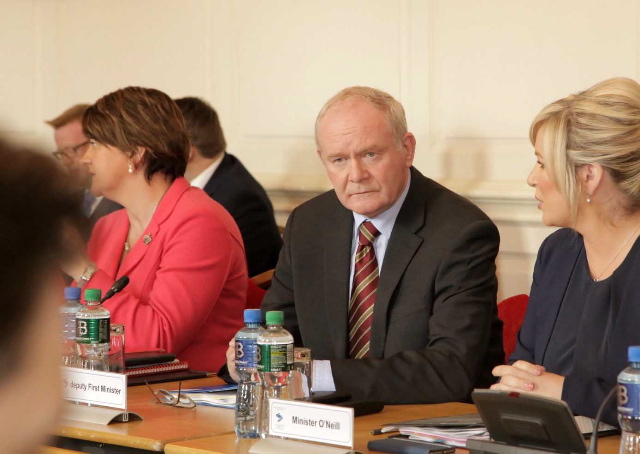 I WAS surprised to see tens of thousands of people out demonstrating in London last Saturday against Britain’s decision to leave the EU. Not because I don’t think there are tens of thousands of British people who are appalled to the point of tears by what their fellow countrymen and women have done. No, the surprising thing was that it was all arranged and carried out with scarcely any pre-publicity. The organisers say they’ll be back with even more if the government doesn’t listen to them.

Brendan Behan figured that when a group of republicans came together, the first item on the agenda was The Split. The same could be said of the UK today. It’s split not just in two over the question of leaving Europe 52% to leave, 48% to stay. The UK is also split by ‘region’. While Wales has obediently sided with England in the debate, Scotland has firmly indicated it wants to stay in Europe, as has the north of Ireland.

When faced with these uncomfortable facts, Leavers like Arlene Foster say that it was a UK-wide vote, not a vote by regions. This is how democracy works. Just because you didn’t get the answer you would have liked doesn’t mean there’s something invalid about it. The people have spoken, so suck it up, Scotland and NI. So is that it? Scotland may feel it’s been electorally mugged, we may feel the same, but we are tied to the tails of England and Wales?

Opinion
Maybe. But this UK-wide division of opinion 52% to 48% has a local echo. Just as there are two near-equal sides in the Brexit debate holding passionately contrary views, so in the north of Ireland there has been a majority in favour of union with Britain and a sizeable minority wanting to end that union. How did we handle it? Well, for fifty years the majority did things their way – after all they were the majority, that’s how democracy works. And so for fifty years we got gerrymander and discrimination and other unpleasant things. “Accept democracy!” nationalists and republicans were told, as the bands thundered through their streets.

Alas, the fifty years of undiluted ‘democracy’ was followed by thirty years of armed conflict. Why? Because the majority dismissed the discontent of the minority. Things are far from perfect now, but at least unionism has been taught the hard way that you cannot hobnail-boot your way over others, simply because you’re bigger than them.

So back to the present day. What can be done to accommodate the masses of people throughout Britain, but particularly in Scotland and the north of Ireland, who want no hand, act or part of this decision to leave the EU? Well, in Scotland Nicola Sturgeon has made clear what she wants: a second independence referendum. The fact that she got the cold shoulder in Brussels from such leaders as the acting Spanish prime minister Mariano Rajoy Brey hasn’t discouraged her – if anything it has stiffened Scottish resolve. If remaining part of the EU means leaving the UK, so be it.

Glad
Here, we have a gap of twelve percentage points between those who wish to remain in Europe (56%) and those who are glad to see the back of Europe (44%). It’s no good telling the Remainers that they’re a UK minority. The north always has been a place apart. If we’re yanked out of Europe, we’ll suffer the problems that Scotland – and London – would face; but in addition we’ll have a land border with the EU.

No, don’t sigh or roll your eyes, Virginia – that border is set to become a bigger problem than ever. It’ll stifle trade between the north and the south. It’ll be an unguardable entry-point for immigrants seeking to get into Britain. And if, as some have suggested, Britain deals with that problem by reinforcing security at her ports and airports, and giving only lip-service to enforcing the border here, there are going to be some very unhappy DUPers gritting their teeth as they’re asked for their passport when they try to enter what they consider their own country.

If Boris and Nigel and Michael had wanted to destabilize all aspects of the UK, they couldn’t have done a better job. Of course, having done the damage, Boris and Nigel have hurried off-stage. Which leaves us with Michael. God help us all.