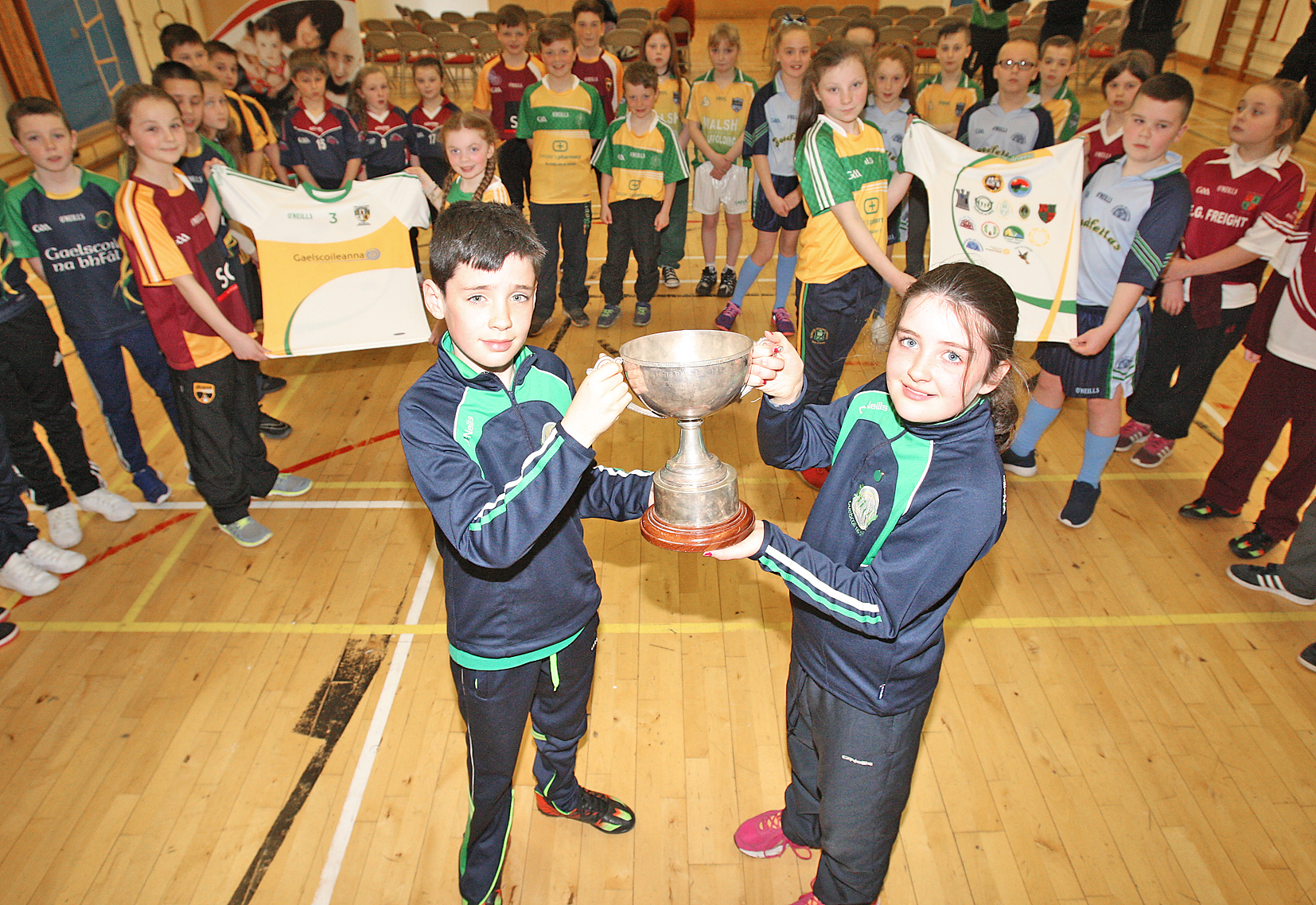 PROUD: Launch of the Liam Murray Cup in Coláiste Feirste with Liam and Amy Murray along with pupils from Irish schools who are competing in the tournament

The Liam Murray Cup is held each year to honour the memory of Liam who played Gaelic football and hurling for St Paul’s GAC and was a former pupil of Bunscoil Phobal Feirste on the Shaw’s Road. Liam died after a courageous battle with cancer in 2010.

Each year children from the different bunscoils come together to take part in the tournament. The tournament is approaching its twelfth year with the cup winners traditionally progressing to the annual Gael Linn provincial Gaeltacht tournament each summer in Donegal.

Speaking about the tournament Liam’s wife Bernadette said: “There isn’t a day goes by that we don’t think and talk about Liam, so it’s lovely for us that his memory is being kept alive through the Liam Murray Cup.

“It’s really great that our twins Liam and Amy are involved which I know makes them feel as proud as punch. The kids have been so excited for weeks, it’s all they have talked about.”
As well as the Corn Liam Uí Mhuirí tournament there are also opportunities for schools to contest shield and plate tournaments (Pláta Choláiste Feirste and Sciath Laochra Loch Lao), with three representatives being now selected for the Gaeltacht tournament in Donegal thanks to Gael Linn’s recognition of the growth of the tournament.

Another recent development will be the selection of an ‘All Star’ team with representatives of each Gaelscoil having at least one member selected for the fifteen strong team.

The ‘All Star’ shirts were specially designed by Coláiste Feirste’s Art department and generously funded by the school’s Sports Studies department. Each shirt will have every school badge on it as well as Coláiste Feirste and Laochra Loch Lao badges. On the front the county crest will appear and the number 3 will be printed on each shirt in memory of Liam who played at full back in both football and hurling.

Another significant step for the tournament will occur with the commencement of Coláiste Feirste’s new multi-million pound Spórtlann facility which has started this year. This will provide much needed GAA facilities for not only Coláiste Feirste but also for the Irish Medium sector as a whole who will finally have a GAA home of their own to grow and develop students, communities and GAA excellence.

Séamus Ó Tuama, one of the tournament organisers said: “Féile Peile na Gaelscoileanna is the highlight of the sporting year for Gaelscoileanna and a privilege to be part of.

“The tournament has been growing fantastically over the past eight years and our next aim is to further develop the Liam Murray festival.”

He added: “Glór na Móna will be running a family fun day as part of this in the Falls Park on Saturday from 1pm onwards. Not only will this fantastic tournament be taking place this year but there will also be a lot of other activities taking place over the weekend.

“There will be a folk night with food, raffles and prizes in St Paul’s on Friday evening. A family fun day in the Falls Park on Saturday from 1-4 with bouncy castles, poc fad tournaments, face painting and much more”.