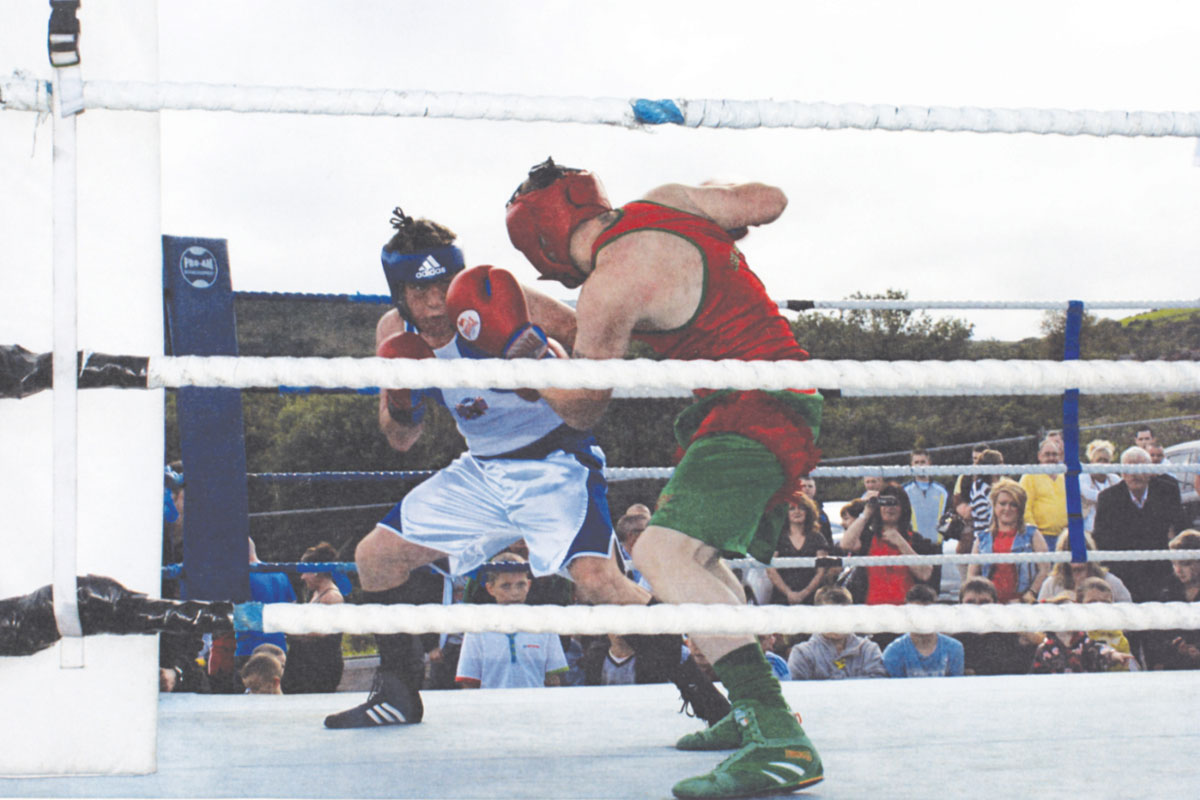 LIGONIEL Boxing Club put on an open air event in the grounds of the Ligoniel Working Men’s Club for the Ligoniel community on Saturday August 20.

His was a free admission family fun day, promoting boxing and finishing off the Ligoniel Festival week in fantastic style.

There were 10 bouts on the day with exhibitions ranging from young novices to senior boxers to football team members who never set foot in the ring before, all adding up to a brilliant day of entertainment.

First up was young Jojo McArdle against Kane Bittles of St Paul’s. These young boxers had met on five occasions with each being superb exhibitions and this was no different.

With each boxer not wanting to give an inch, they showed what great potential they have for the future.

Michael Magee was up next against this year’s All-Ireland and Irish Cadet champion from St Paul’s. After landing a few heavy shots in the first 10 seconds, Michael turned what was meant to be an exhibition into a bit of a grudge match – showing why his coaches have such high hopes for him this season.

Third up was a rarely seen all-girl bout. The two boxers were Dillon from Manchester and Kristina O’Hara from Emerald. Both girls put on a great show of boxing, promoting the equality in the sport for  boys and girls.

Next up were Nathan Gorman and Ryan Murphy – both from the Ligoniel club.

With both boys being team-mates, they could relax and put on a fine display of footwork, movement, speed and counter-punching in a closely-matched contest.

John Flood and Alex McAuley from Manchester were next. John and Alex were close friends before and after the bout, but weren’t too friendly during the fight with both landing some very heavy shots.

Next were Sean and Brendan Magee against Mike Dillon and Ben Longworth.

These were return fixtures from their Manchester trip a few months ago. Both boxers were eager to put below-par efforts behind them and they did so in fine style.

Next up was a round robin of heavyweights - Damien Ramsey, Kevin McLaughlin and Colin McCabe from Newry.

The latter two have been sparring with Ramsey in preparation for the upcoming Novice Championships and they didn’t disappoint with six rounds of hard-hitting action.

The next two bouts were volunteers from the Ligoniel Working Men’s Club FC.

Firstly, Patrick English and Brendan McLarnon stepped into the ring and after trash talking each other for weeks, both lads gave it a real go and provided some great entertainment for the crowd.

However, best of all were brothers Frankie and Jim Arbuckle who had the crowd on their feet with a spectacular exhibition. Both boxers looked as if they had been practicising their whole lives and had done this many times while growing up. With egos at stake there was clearly no love lost.

The Ligoniel Boxing Club would like to thank everyone involved in running this great day. Special thanks to the LIA, Moss Side Firestation ABC, LWM FC and Kevin Brady Scaffolder.