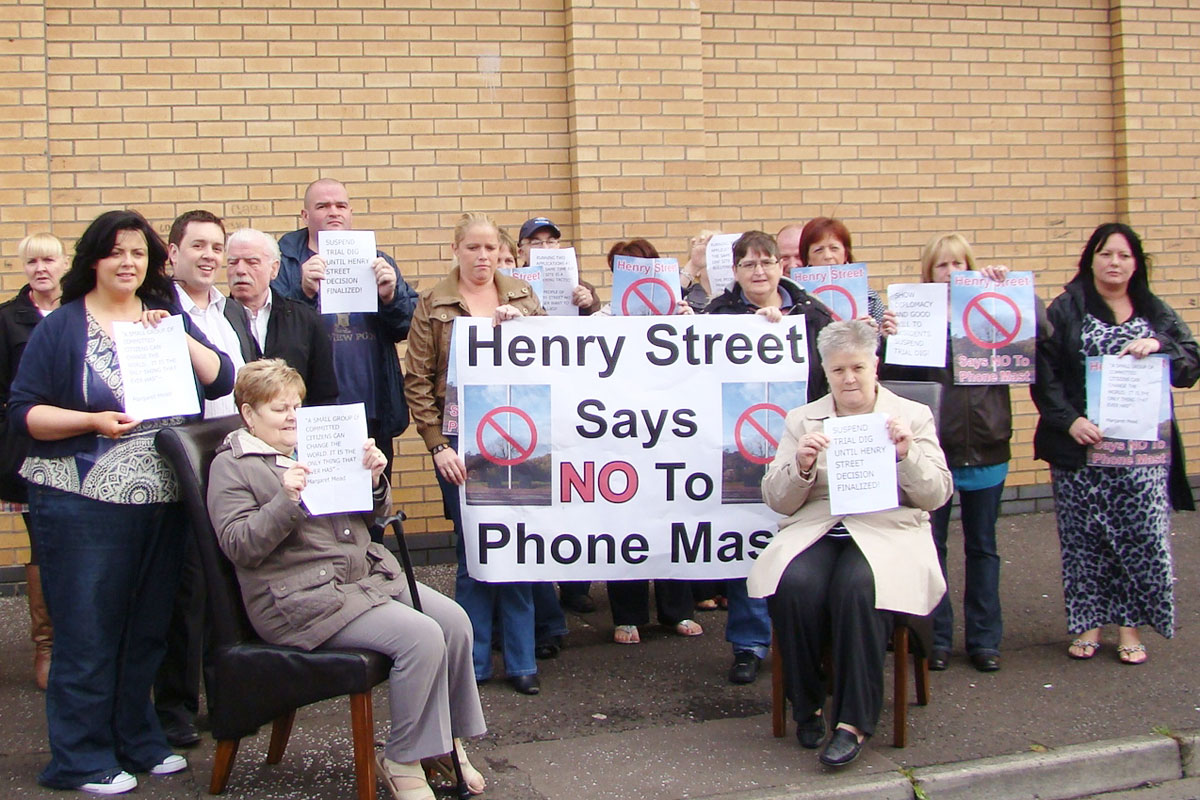 North Belfast residents opposed to the erecting of a mobile phone mast in their street have blocked a ‘trial dig’ there, and stated they are “confused and angry” about the situation.

Contractors for Vodafone and 02 attempted to take part in the dig yesterday (Wednesday) in Henry Street in the New Lodge, where they had applied to put up the mast. However, dozens of campaigning residents forced them to stop by crowding the site.

The site was approved by the Planning Service, subject to Belfast City council approval. However, the mobile giants have also made a second application to build the same mast on top of the Cityside Shopping Centre.

Henry Street resident Alanna McGarry said the peaceful protest had put over the point of view of residents, who are worried any mast would emit dangerous levels of radiation, as well as become a focus point for anti-social behaviour.

“We have collected over 300 objection letters opposed to this mast, so we demand to be taken seriously, as we have provided intelligent and well-reasoned arguments for a refusal.

“Our message is clear – we will not be bullied into accepting a structure that has the potential to have a detrimental effect on our long term health.

“But we face a difficult time, as the Planning Service has approved the Henry Street site, subject to the council’s backing. As we understand it, the main reason for that was the back of the houses in this street will be facing the mast. But what is not understood by the planners is that most residents use the back of their house as their main entrance.”

Sinn Féin councillor Conor Maskey, who took part in the protest, said he would seek to defer the planners’ decision at tonight’s committee meeting.

“It will go before the council with an opinion to approve but I will oppose that, which means it will be deferred and we will have negotiations on it.

“It was far too soon for 02 and Vodafone to go ahead with this dig, especially if they have also put an application in for Cityside. This move has created confusion and anger in the district, especially considering how upbeat things were last week at how the campaign was going.

A joint spokesperson for Vodafone and O2 said any mast would be low-powered.

“We attempted to complete a trial dig at the site to assess its suitability but locals conducted a peaceful sit down protest and as such we couldn’t complete the dig.

“We still have a requirement to provide coverage for our customers and as such we are looking at all potential options.”