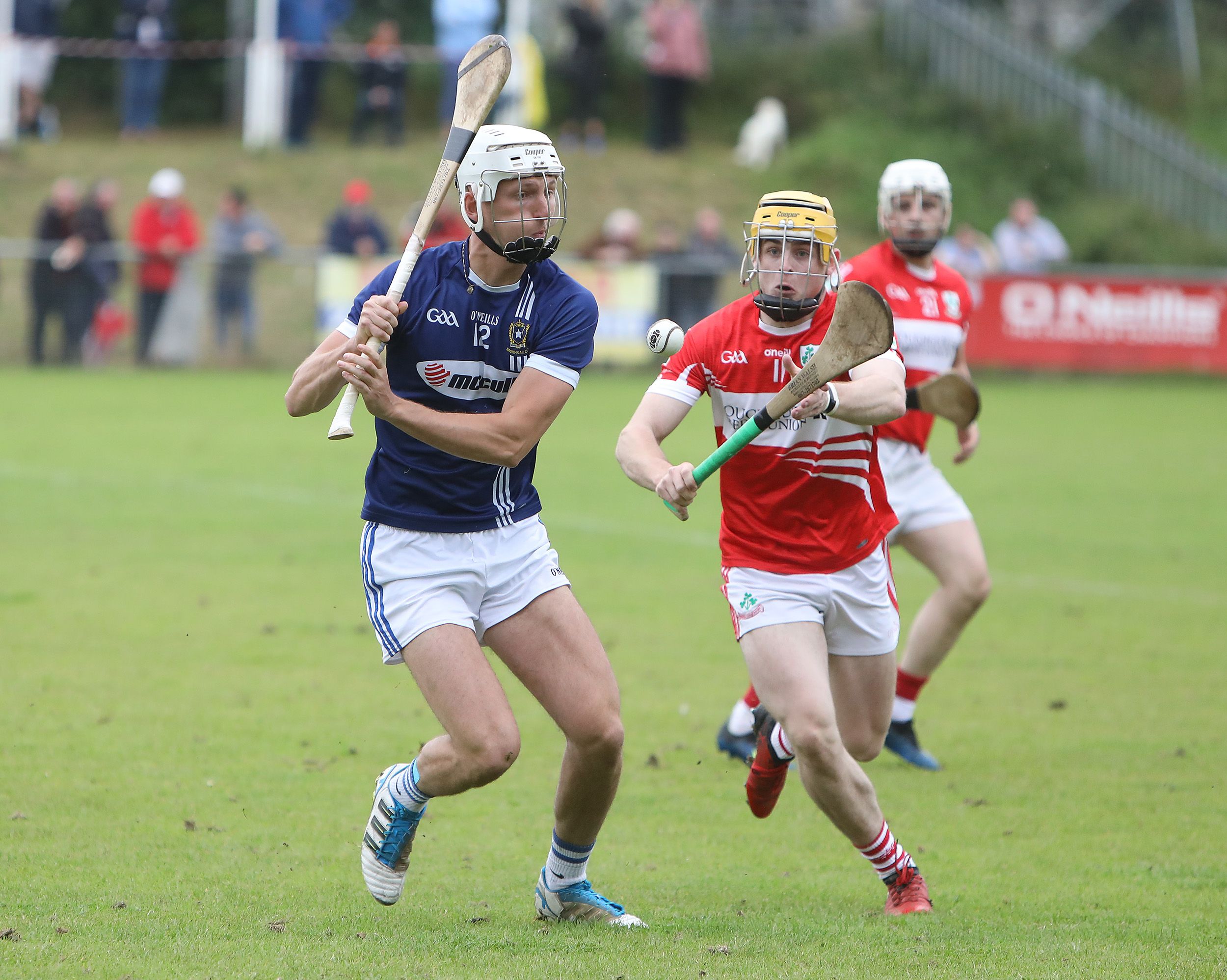 LOUGHGIEL booked their place in the semi-finals of the Antrim senior hurling Championship with a devastating 19-point of St Gall’s on Sunday.

Having claimed a win over neighbours Cushendall last week, the Shamrocks are now certain to top Group 2 regardless of next weekend’s results.

On the basis of this performance, Hugh McCann’s side will have a major say in the destination of the Volunteer Cup - especially if they can keep James McNaughton injury free.

The Antrim attacker plundered 0-13 in a stunning individual performance while Shay Casey helped himself to 1-4 from play.

Jackson McGreevey was the best for St Gall’s, hitting 0-5 from open play, but the hosts had to work extremely hard for their scores against a superbly well-drilled Loughgiel rearguard.

A bad afternoon for St Gall’s progressively got worse as they lost Mark Napier to a straight red card, which will rule him out of next Sunday’s trip to Cushendall.

The Burkes, Conor and Sean, were also forced off with hamstring injuries while Karl Stewart is out for the rest of the season after breaking his foot against St Enda’s.

Still, things could have been very different for the West Belfast men at the beginning of Sunday’s contest.

They had a goal and a point chalked off in a dramatic opening few minutes as Napier’s effort at the posts was waved wide despite the protests of the St Gall’s players.

Moments later Conor Burke looked to have bagged a goal following a long ball from McGreevy, but referee Eamon Hasson gave a few out for a square ball infringement.

In what would be a feature repeated throughout, Loughgiel replied almost instantly through Eddie McCloskey while McNaughton converted a free on 11 minutes.

The North Antrim men lost full-forward Benny McCarry to an ankle injury before the water break while CJ McGourty hit a class point from play after recovering from losing his footing in the build up.

Casey quickly restored his side’s three-point advantage before McNaughton reeled off a hat-trick of points inside two minutes to put daylight between the teams.

St Gall’s squandered a well-needed goal chance at the other end on 22 minutes when Marcus Donnelly forced a fine save from Chrissy O’Connell and he couldn’t direct the rebound on target.

Fine scores from Kieran McGourty and a brace from McGreevy were just reward for the effort of the hosts, but the visitors found their much easier to come by.

Callum McKendry got his name on the scoresheet before Casey bagged the game’s first goal.

A delivery by Mark McFadden was claimed by St Gall’s goalkeeper Kurtis McGreevy, but he could only clear as far as Casey, who pulled on the loose sliotar for a opportunistic goal.

McKendry was perhaps fortune to escape with only a yellow card for a late challenge on Stephen Morrison as Loughgiel finished the half with points from McFadden and Casey to lead 1-11 to 0-5.

McNaughton highlighted his undoubted class by rattling off three points at the beginning of the half while McGreevy got his fourth of the day before Donnelly hit a great long range point on 36 minutes.

Substitute Joey Scullion bagged a brace of points as Loughgiel continued to pick off scores at ease as the St Gall’s challenge faded.

Midway through the half, they suffered a hat-trick of blows as the Burkes, Conor and Sean, both left the pitch within two minutes of each other - both nursing hamstring injuries.

As the younger Burke was making his way off the pitch, Hasson was consulting with his linesman and issued a red to Napier for an off-the-ball clash with Neil McCarry.

McNaughton point-taking late on was exhibition material as he brought his tally to 0-13 including seven from play, but St Gall’s plundered a goal of their own late on as substitute Anto McCaffrey gave O’Connell no chance with a rasping finish from close range.

Due to their head-to-head wins over St Gall’s and Cushendall, Loughgiel are certain to top the Group and are through to the semi-finals and are likely to rest key players when they host Naomh Éanna.

St Gall’s will contest the quarter-finals and their game against Cushendall next Sunday will determine who finishes second and third in the group.