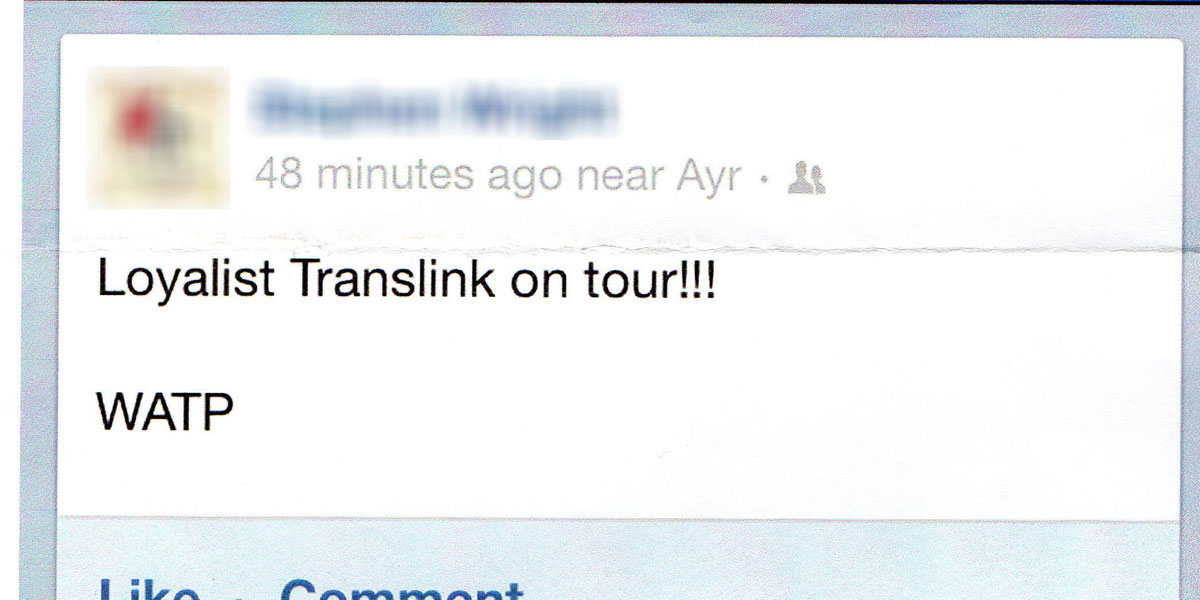 Catholic bus drivers will consider strike action if the company fails to  take action against employees who posted sectarian remarks on a social networking site, we’ve been told.

Inflammatory comments were posted on Facebook by a number of Protestant Translink drivers after a recent outing to Scotland, boasting that no Catholics were present. Word of the Facebook comments has spread like wildfire among Translink staff leading to tensions between Catholic and Protestant workers.

Among the comments made by Protestant bus drivers while on the tour were: ‘Prod trip to bonnie Scotland feckin magic not a Tim [Catholic] in sight’ and ‘Loyalist Translink on tour!!!’

One driver who works out of the Falls Translink depot told the Andersonstown News that the company and the unions are aware of the online activity and said he and Catholic colleagues hope that firm action will be taken.

“There is a lot of real anger among Translink’s Catholic workforce across the North about this,” he said. “It’s been a hot topic of conversation across the depots and we want to see something done. The unions are aware of the issue and all parties have copies of the online postings. If nothing is done, people are prepared to strike. This type of behaviour should be regarded as gross misconduct, especially as the company name was mentioned and that is just not on. We expect action to be taken.”

A Translink spokeswoman told the Andersonstown News yesterday that the bus and train company is investigating the matter.

“The company has been informed by a small number of employees that they have seen inappropriate comments on a social networking site, allegedly posted by other members of staff outside working hours,” she said. “We are currently investigating these claims in line with internal procedures.”