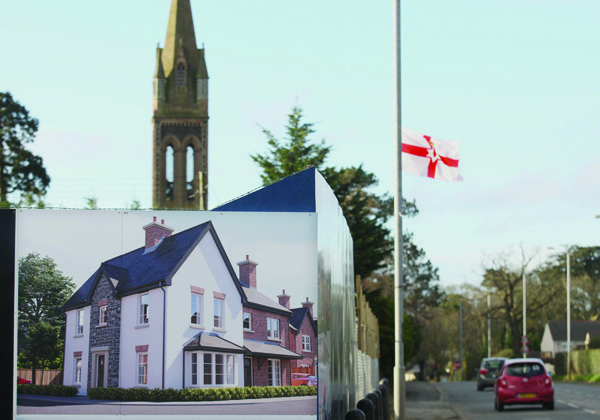 LOYALIST flags erected outside a new housing development in Newtownabbey have been condemned by both Sinn Féin and the DUP.

The North Belfast News understands the Ulster flags were erected at the new Loughshore Manor site in the Whitehouse area of the Shore Road last weekend.

Last month, Ulster flags were erected on lampposts outside the nearby St Mary’s Star of the Sea Church.

Local Sinn Féin Councillor Micheal Goodman has called for the removal of the flags right away.

“I am calling for the immediate removal of these flags,” he said.

“Flags and emblems should not be used to mark out territory, to harass, intimidate or antagonise anyone.

“Those responsible for flying these flags are interested only in exacerbating difference and fomenting discord.

“As a local representative,” he added, “I support efforts to support good relations and I encourage others to do the same.”

A DUP spokeswoman said the party was opposed to “demarcation” on all sides.

“The DUP have made it consistently clear that flags should not be used to intimidate anyone. The experience of Felden has shown the huge damage such actions can have upon community relations.

“The party continues to opposed demarcation of any kind in Newtownabbey, exemplified by our Councillor's opposition to proposed bi-lingual street signs, which was aimed at dividing our community.”