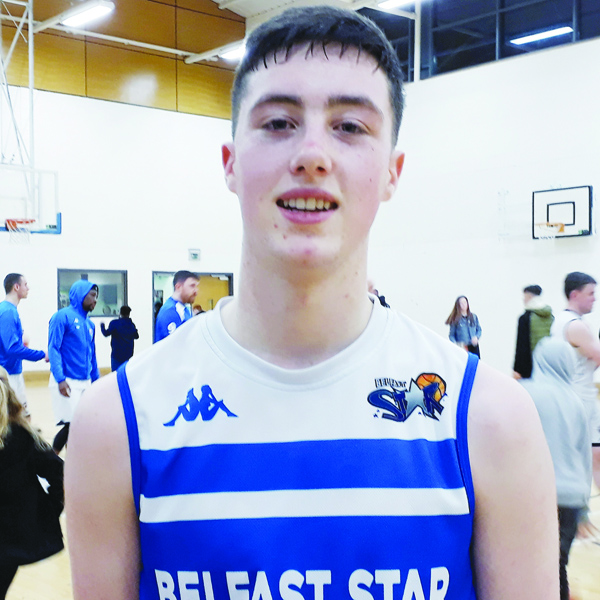 CJ Fulton produced his best performance of the season on Saturday

HEADING to play Dublin Lions this weekend, Belfast Star still remain second in the Super League title chase. Yet they remain hopeful that somewhere in the final three games of the season league leaders Tralee might just slip up.

The Belfast side saw off the very tough challenge of DBS Éanna last Saturday evening (81-59), coming from behind to finish with an impressive win forged mostly in the second half via the hands of CJ Fulton, the Star point guard who served up a season’s best performance in front of a full house in La Salle.

Such was the display from Fulton that even well-seasoned onlookers were left scratching their heads to find the words to sum up his contribution.

Among them was Assistant Star Coach Javan Dupree, a man who knows this league inside out.

“We keep running out of words for CJ but that was definitely one of the most complete displays I’ve seen here,” he said.

“He really was awesome. When we were struggling in the first half, CJ kept us in it. And when we needed to step up after the break his vision and distribution were terrific.

“Every decision he made was the right one - and he did everything with a real touch of class. But then, that’s just CJ.

“We also have to remember too that right across the season, here’s a local guy making even American Division One players really struggle to match him.”

It was certainly true that Star needed Fulton to keep them in the game in the first half. A superb opening display from the visitors, including an unanswered 10-point run late in the second, saw them into a 26-35 lead at the half-way point, despite a gutsy 12-point tally from the Star talisman.

The home side rallied back quickly in the third, however, with Fulton and Delaney Blaylock finding their rhythm along with big scores from Aidan Quinn and Keelan Cairns as well as telling inputs from captain Conor Johnston and big man Liam Pettigrew. And even though Éanna have the joint toughest defence in the League, Star simply out-gunned them 30-12 to go into the fourth at 56-47.

Once they were ahead, Star showed no sign of letting the game – or their title challenge – slip. Together with Johnston and Quinn, Fulton engineered a nine-point blitz that put the game well beyond the visitors by the mid-way point of the fourth.

Speaking afterwards, head coach Adrian Fulton said: “That was a great team effort tonight against a very good Éanna side. We made very little from the perimeter in the first half, but we put in a terrific second half performance at both ends of the floor. And I have to say that the crowd helped us out big time when we were struggling – as they have done all year.”

Top scorers on the night were CJ Fulton on 27, Delaney Blaylock on 19 and Aidan Quinn on 16.

Star move on to face Dublin Lions on Saturday, six points clear of third and knowing that every game is a must-win on the run-in.