Magnificent 7 ride to the rescue 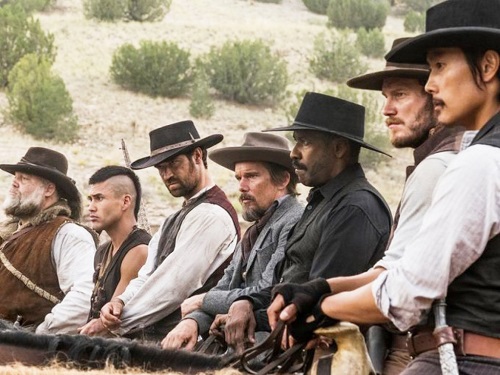 ALL FOR ONE AND ONE FOR ALL: The remake of the famous western will hit the big screen this week

THINGS are far from sleepy in the small, unassuming farming town of Rose Creek.

Setting his sights on the defenceless town, heartless industrialist Bartholomew Bogue (Peter Sarsgaard) will do anything it takes to move the population off the land – he’s even willing to murder to get what he wants.

After Bogue kills her husband, his widow Emma Cullen (Haley Bennett) races to the next town in search of help and it’s here that she meets bounty hunter Sam Chisolm (Denzel Washington).

Begging Sam to intervene and save Rose Creek from the terror unleashed by Bogue, Sam takes on the job and sets about recruiting a band of brothers who aren’t afraid of a fight.

YOU know exactly what you’re in for when you go to see an Antoine Fuqua movie and the director of movies like Training Day and Olympus Has Fallen certainly knows how to bring an abundance of attitude and action to his movies.

The Magnificent Seven is no exception to this rule and fans of Fuqua’s movies are in for a treat, as the stylish director sets his sights on John Sturges’s classic western.

Rebooted, updated and suitably pumped for an 21st century audience, Fuqua’s retelling of this classic tale has upped the ante in terms of fire power, body count and righteous wise-cracking galore. It’s this mean, badass attitude that’s as infectious and as entertaining as the bullet-ridden action dished out on screen.

This time around, Yul Brynner, Steve McQueen and Charles Bronson are replaced with Denzel Washington, Chris Pratt and Ethan Hawke. Although this would usually prompt cries of bah humbug from strict devotees of the classic, Fuqua’s remodel is its own animal so it’s best not to dwell on the Sturges classic.

Instead, the excellent Denzel Washington slips into his role with his trademark cool, unflappable charm, while the chemistry between the rest of the ragtag band of brothers is an absolute joy.

PACKED with well-paced, hard hitting, explosive action, The Magnificent Seven is the perfect popcorn movie – just sit back, tune out and enjoy the madness!