MÁLA POIST: What would meet the real needs of the North? 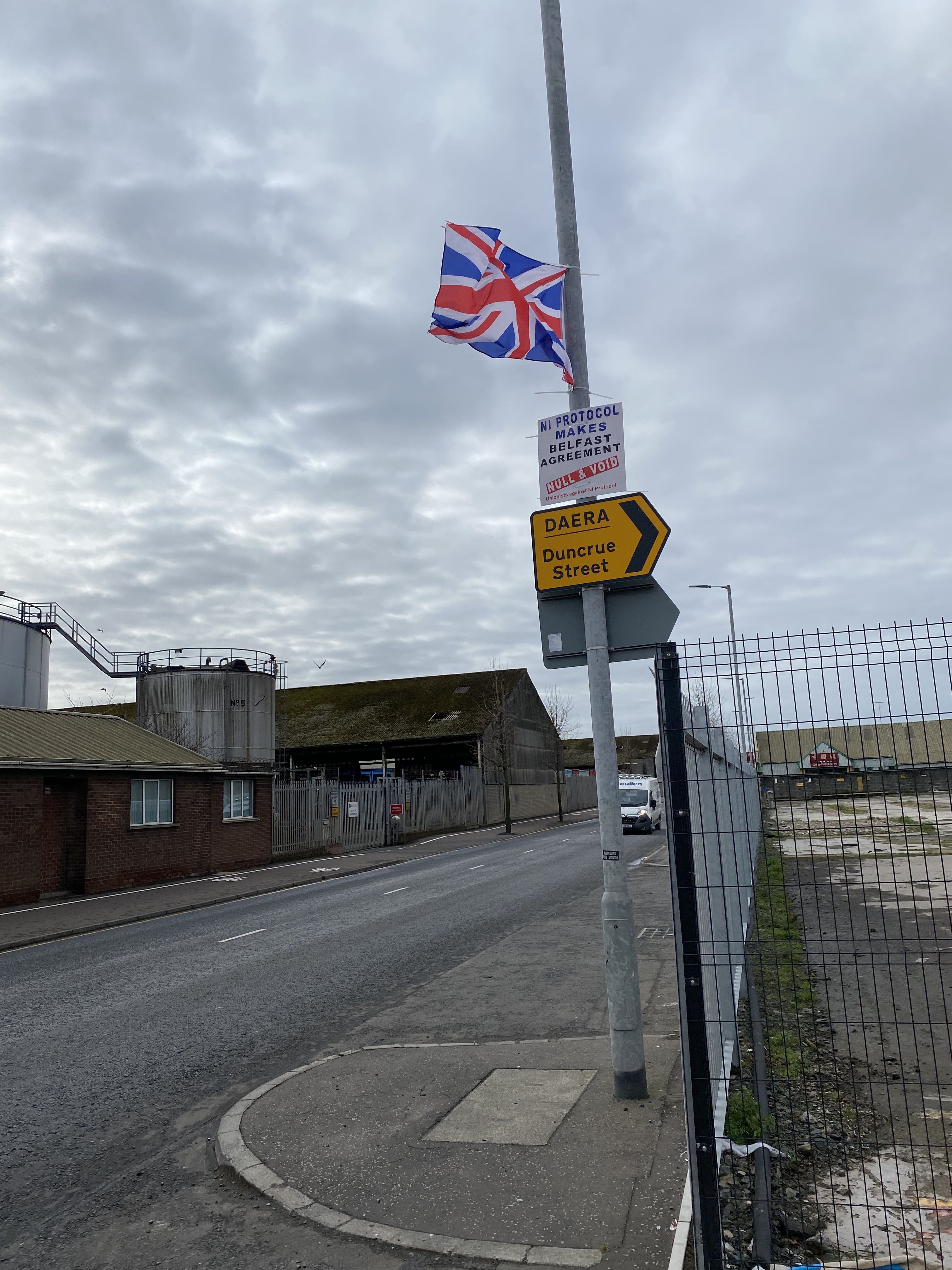 "WESTMINSTER REMOTE FROM REGIONS": Union flags and slogans erected at the new Customs depot at Duncrue Street in the Dock to check goods arriving from Britain into the EU Single Market

PROFESSOR Mike Tomlinson has written a good piece on the origins of Northern Ireland's financial dependency on Westminster and the role it plays in the English imperial project. He argues that the subvention Northern Ireland receives from England would not have to be as great in a united Ireland and that it would result in a more equal and progressive society.

His conclusion is that “It is time to stop thinking of the North as a burdensome basket case and instead to imagine what the North brings to the piece.” But he doesn't actually make a case for what Northern Ireland would bring to a united Ireland, beyond the need for a slightly reduced subvention from the Irish, as opposed to the British exchequer. The benefits of improved integration in an all-Ireland economy or reduced duplication of administrative services is not discussed.

But most importantly, there is no discussion of the economic and financial benefits of public policies more attuned to the actual needs of Northern Ireland (as opposed to English public policy imperatives) that could be enacted in an all-Ireland context. Ireland has done many things badly, but it leads the world in attracting foreign direct investment and making the most of the EU Single Market. Northern Ireland's heavily agriculture-based economy is also more suited to benefit from EU CAP policies than what are likely to be applied in post Brexit Britain.

The Westminster bubble is famously remote from the needs of the regions within the UK. Might a Dublin-based government with ample Northern Ireland representation and involvement not be expected to be more closely aligned with Northern Ireland's real needs?

Royal dispute is about distribution of spoils

IF a race from the 21st century back to the Dark Ages ever became an Olympic event then Britain would certainly be the leading contender for a gold medal.

And in this bizarre public dispute between England’s royal aristocrats and their spouses it could not be more aptly illustrated.

What we are witnessing here is not a protest against the existence and functioning in the 21st century of an archaic, sectarian, degrading and corrupt institution which thrives in a grotesque system of hereditary privilege. Nor is it a sigh of indignation at the snobbery, fictitious titles, extravagance and the wastage of resources and vast amounts of taxpayers money by a historical dynasty of wasters who have never contributed anything either in enterprise, endeavour, innovation, imagination or ingenuity to the creation of that wealth.

And it is not the expressed embarrassment at all the pomp and vulgarity that comes with it. Rather, what we are witnessing is a dispute among aristocrats and their hangers-on over their place in the pecking order and distribution of the spoils of that hereditary privilege.

In the world of women it is difficult to imagine anything more degrading, humiliating or more self loathing than curtseying to another human being, least of all to the hereditary and unelected head of such a historically infamous institution as the English monarchy, or whoever adorns its trappings. But most bizarrely of all is that the alleged victim in all of this is a self-proclaimed champion of women’s rights, who tells us that she practised this grotesque ritual until she doubled over to perfection at the feet of the queen.

This ugly spectacle is more like the protests of a vanquished insect that is thrown to the forest floor in a pecking order struggle between creepy crawlies in the Amazon rain forest. And our own main concern should be about how we can help to bring this throwback to the Dark ages to an end.

I WAS speaking lately to friend from Hong Kong who is planning to attend Queen’s University here in the North of Ireland to finish a degree. This person has been to Belfast many times and really likes the West.

He planned to rent accommodation in the West of the city but the only problem he has that he can’t get train or Glider to Queen’s. Some may say it’s not that far  but it is a  long walk away and this person has  been unwell and had to drop out of uni as he took ill on a gap year on a visit to Europe. He can’t bike it campus due to health issues.

This made me think this is an issue for people with disabilities and it also made me think, why does West Belfast not have a train service? When you think about it in East, South and North  Belfast you can jump on a train and be dropped yards from Queen’s in Botanic. While I think West Belfast has the best travel service from the black taxis to the Glider, why don’t we have a train service like other parts of the city?

West Belfast is the only part of the city that does not have a train service and maybe that’s something that can change as it would be a good thing for the citizens of this part of the city and a very important public service.

OBVIOUSLY Boris Johnston thinks travel arrangements do not apply to him when he made a no-point visit to the North on  March 12.

While Michelle O’Neill made the right decision not to join him for publicity photos I was not entirely surprised by the behaviour of some politicians who did, none more so than the Health Minister Robin Swann. NHS staff have spent a year on the front line fighting Covid-19 and I’m sure they were delighted to see their Health Minister touching elbows and laughing with a Prime Minister who thinks those staff are only worth a one per cent pay rise.

In an interview afterwards Robin Swann was also asked about the planned events around the centenary of a sectarian state,. He said he looked forward to the recent one hundred years. I think Robin has shown his true colours playing party politics in the middle of a crisis when the workforce is mixed not just Protestants but Catholics, It shows a total disrespect for the sacrifices the staff are making.

There is also the possibility of nurses taking industrial action again. Some things never change, or do they?  Health Service staff need to get behind the united Ireland campaign where they will be paid a decent wage based on their ability not on their religion, gender, race, sexual orientation or politics.

A True Republican (Name with Editor)

You can submit a letter to the Editor direct from our website by clicking here.